You Need a Ghost

And you need to be afraid of it. Oh, I know. You ain't scared of nothing, and you still have that "No Fear" shirt from the 1990's to prove it. But I also know that every successful person, in any field, has a ghost or two that haunts them.

A "ghost" is something that follows you around your whole life, nudging you. While you may not exactly be afraid of it, it does worry and weigh on you:

On our field of play, maybe these ghosts look different:

These ghosts get us out of bed for a morning workout when we'd rather sleep in. They make us work a little harder, be a little more disciplined with our diets, and take a LOT more responsibility in our lives. They "scare" us in the right direction.

If you don't have a ghost, summon one. It'll keep you more motivated than some sugary-sweet meme about shooting for the moon.

Now, it's true, some people probably don't have ghosts. And they're probably f*cking losers.

The measurement of body composition is an inexact science, and outside the laboratory, it becomes an even more inexact science.
Health & Longevity, Living Better
Jason Norcross May 10 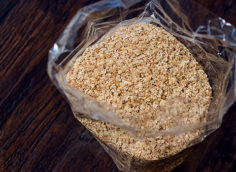 This compound, found in a well-known, inexpensive health food, has been shown in animal models to increase lifespan by as much as 25%.
Health & Longevity, Living Better
TC Luoma February 17