It's also, incontestably, the best place in the world for people watching, a sub-category of which is eyeballing the girls coming into the casinos from the cold to party at one of the spectacular nightclubs.

You know what I'm talking about – the seemingly endless parade of young girls encased in spandex sausage casings that identify as dresses. The natural hemline of these garments falls just below the waist, but the things are stretched downwards against their will to engulf the bootie, at least until the wearer attempts to walk.

That's when the abused tank tops-slash-dresses struggle to go back to default mode and slide back up the side of glute mountain towards the waist, forcing the wearer to stop every few steps and yank the thing down lest they inadvertently display – especially if they're not wearing any underwear to boot – their own personal Las Vegas strip.

The best most of them can do is relegate the hemlines to the Neutral Zone – half-ways up between glute and hip – knowing that some Romulan dirtbag might look, but hoping he won't touch because she will start some drama and he don't want no drama.

Anyhow, the salient point here is that, despite the near-freezing Las Vegas winter weather, virtually none of these women or girls are wearing coats or jackets. My niece, who lives in Vegas, has a simple explanation:

"Ho's and polar bears are the only animals that don't feel the cold."

Maybe my niece is channeling rapper and empirical scientist Cardi B, who famously said, "A ho never gets cold."

Anyhow, neither my niece nor Cardi B were being disrespectful. Both were merely observing a fact: women who wear less on cold nights don't seem to get as cold.

Surprisingly, a group of female graduate students from the psychology departments at the University of Florida and Colorado College decided to conduct a study on this phenomenon. What they found was that for many women, looking "hot" means not feeling cold.

How Many Points for Totally Naked Except for High Heels?

The researchers, over the course of five cold February nights, surveyed 224 two-legged "polar bears" in a Southeast U.S. city known for its nightlife. The participants were asked how cold they felt on a six-point scale from "not cold at all" to "extremely cold." Naturally, the participants were also asked how many alcoholic drinks they'd had (a scale from 0 to 8 or more).

The participants earned either a 1 or a 0, with 1 indicating the body part in question was exposed and a 0 indicating it wasn't. (Each participant received a glow-in-the-dark bracelet for their participation, which is nice.)

The skimpy clothing scores were then compared to women's perceptions of coldness while also taking into consideration alcohol consumption.

What the Study Revealed... Other Than What Was Already Showing

The naked-er the women were, the less they felt the cold. Here's how the authors of the study explained it:

"...we found that women who are more highly focused on their appearance show no relationship between how little clothing they are wearing and their reported feelings of being cold on a cold night out. These findings suggest that to the extent women self-objectify, they increasingly lose access to their own physical experiences."

What they're saying is simply that women who are highly focused on the way they look become disconnected from their bodies. They're less aware of things like hunger, their heartbeat, and, case in point, whether they're cold or not.

(Despite this disconnection from their bodies, these polar bears still seem to be aware of their heinies being exposed. It makes me think that pulling down a dress might be a function of the autonomic nervous system, like breathing, or something less vital like coughing, sneezing, or burping.)

What about the rare, well-adjusted female who is low in self-objectification, who couldn't care less about exposing her body to others – the Amy Farrah Fowlers of the world? Those women, apparently, show a positive and intuitive relationship between their clothing and feeling cold.

In other words, they're not polar bears; they're short-haired mammals from more temperate climes. If they were poodles or Shih-Tzus, they'd put on cute little sweaters before going out in the cold.

While feeling "sexy" might not normally be a priority for her, she's not immune to it, and she too might, on these occasions, become a bit of a polar bear herself.

I'm not aware of any corresponding studies involving male polar bears, but I've got some theories. I don't think the average flannel-shirt, grungy-sneaker-wearing American male can self-objectify as some women can.

It's related to the old "lipstick on a pig" adage, and dressing to look "hot" is pretty far-fetched for most of them. As such, when he's cold, the American male feels it and puts on several layers of burrito-stained hooded sweatshirts.

However, I suspect there are at least a few exceptions – specifically, a large percentage of gay men and a large percentage of bodybuilders and CrossFit dudes. Self-objectification appears to be as ingrained to these groups as it is to any jiggly, spandexed, high-heeled female nightclubber.

So deep, apparently, is the self-objectification of these men that I doubt they'd feel being poleaxed, let alone being cold. The only difference between these polar bears and their female counterparts is that they wouldn't bother to pull up their pants if their asses were showing.

The gym isn't an escape from life's problems, but a way of solving them. A strong body makes for a strong person. Challenge yourself, test yourself, and grow.
Motivation, Opinion, Powerful Words, Strong Words
Dave Tate October 12

Here's why you need to do a few things that scare the crap out of you.
Motivation, Opinion, Powerful Words, Strong Words, Tips
Eirik Sandvik April 2 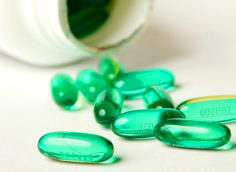