Moderate weight or moderate sets? Use more reps per set, or use heavier weight, more sets, and fewer reps per set? God almighty, which is the optimal way to train for size?

Well, if you ask me – and I hope you do – the answer is both! Both higher-rep and lower-rep training, so long as the total volume remains high, can be beneficial to the bodybuilder looking to increase muscle mass. And while some strength coaches will argue vehemently that one or the other of the two approaches is the only way to train, I'm of the opinion that utilizing both methods will yield the greatest gains.

Maybe I'm an anarchist, but let's examine the various benefits each approach offfers:

Less Neurologically Demanding: When conducting higher-rep sets, trainees can generate a high-volume output with fewer sets and a lighter load. This shortens the workout and decreases the session's overall degree of difficulty, making the trainee less susceptible to overtraining. When training with lower-reps, a trainee must perform more sets at a greater intensity to maintain the same volume output. This is extremely taxing to the central nervous system and most trainees won't be able to perform such demanding workouts for extended periods of time without frying their nervous systems.

Greater Density per Workout (work per unit time): When working in higher-rep ranges, trainees will be performing fewer total sets and will generally be resting for shorter periods of time than when training in lower-rep ranges, thus increasing the density of the workout. Density is a critical variable in the muscle building equation.

Greater Time Under Tension per Set: Given equal tempo prescriptions, higher-rep sets will yield a greater TUT per set than lower-rep sets.

Greater Protein Degradation per Rep: When training with lower-reps, trainees can use much heavier loads than when working in higher-rep ranges. Heavier loads place greater tension on the working muscles, which will in turn cause greater protein degradation per rep. The amount of protein degraded during an exercise session is directly related to the growth potential of that session.

Greater Functional Growth: Substantial growth of the contractile proteins myosin and actin can be attributed to low-rep training, while higher-rep training tends to yield more sarcoplasmic hypertrophy. This is known as "functional" vs. "nonfunctional" growth, as the former yields substantial increases in strength, while the latter does not.

Greater Strength Increases: This is partly due to the contractile hypertrophy mentioned above, but neurological factors also come into play. Heavy training is much more neurologically demanding than higher-rep work and an increase in motor neuron efficiency will also contribute to strength gains.

Greater Improvements in Myogenic and Neurogenic Muscle Tone: Because the contractile proteins are by far the densest component of skeletal muscle, one's myogenic tone, or muscle density, will be improved while on a lower-rep protocol. Also, one's neurogenic muscle tone (tone when movements or contractions occur) will be enhanced through the high-intensity induced sensitizing of alpha and gamma motor neurons.

We've discussed high-rep training and low-rep training, but what about sets of 6-8 reps, which are simply a compromise of the two aforementioned approaches? Apart from boredom, continually utilizing this rep range seems like a great idea, except that regardless of the method you choose, eventually (most likely in a matter of weeks), your progress will stagnate.

That's because the body is the king of adaptation. It can and will adapt to any stressor you continually throw at it; this includes your favorite rep range and/or training program. After that initial month or so of progress, gains slow to a screeching halt, and unless you make some changes soon, you won't be making any gains at all.

So what's a smart boy to do? Change the exercises, right? WRONG! As Christian Thibaudeau has pointed out, "Your body will adapt itself to the stress placed upon it, not to the means which provide that stress. Your body doesn't know if you're doing barbell curls or preacher curls, nor does it care to know about it!"

In short, simply changing your exercise selection isn't going to do anything to promote further progress. It does nothing to change the stimulus to a given muscle; it only derails your long-term strength gains by taking away from the principle of specificity. You want a stronger bench press? Try actually performing it for more than four weeks at a time! This is a major problem in that rarely does the average trainee conduct an exercise long enough to actually get good at it! This is why, with my "Training for Maximal Size" program, you'll perform the same exercises for the entire duration of the 12-week program. You'll not only maximize your size gains, but you'll get a hell of a lot stronger, too.

Another variable that we don't want to screw with when training for size is volume. A high volume output is absolutely necessary to facilitate maximal growth, and it must remain elevated throughout the duration of the program. So, forget about changing the exercises and/or altering the volume; rather, focus on manipulating the set/rep scheme. By manipulating the set/rep scheme, we automatically manipulate other important "stress related" variables, such as:

For example, if changing from a higher-rep, lower set scheme to a lower-rep, higher set scheme, the load increases (heavier weight is used with lower-rep programs), the TUT per set decreases (due to lower-reps), the rest periods between sets increase (longer recovery is needed between sets), and the density per workout decreases (workouts are longer due to greater rest periods and more sets).

The last variable worth manipulating is the tempo of a given repetition, which is also a stress related variable. This information will come in handy when we outline our 12-week program for maximal size later in this article.

The exercises used in this program, with a few exceptions, are compound, core movements. They will be utilized throughout the duration of the 12-week program and are as follows:

NOTE: I recommend that during this training phase you follow up the compound movements with a few sets of isolation movements. An example would be to conduct 3 sets of leg extensions and dumbbell flyes after your squat and bench session.

NOTE: Due to the demanding nature of this training phase (high intensity and volume), only 2 exercises are performed per workout. I recommend that you alternate back and forth between the two exercises for a more time efficient training session. No additional isolation work is to be done, only the 8 prescribed movements.

NOTE: No additional isolation work is to be done, only the eight prescribed movements. Please note the change in tempo.

• Train as often as possible, up to six days weekly. As long as your nervous system has recovered (if you feel motivated to work out), train again, even if you're sore. Contrary to popular belief, training a muscle when it's still sore doesn't necessarily affect metabolic recovery adversely.(1,2,3) If, however, you start to feel unmotivated and begin to loathe the thought of having to train, this is a sign that your central nervous system hasn't recovered yet and you should cut back on the weekly training volume (number of days per week).

• Don't train to absolute failure; rather terminate each set one rep shy of failure. Never attempt to perform a rep you will not complete in near perfect form.

By periodically manipulating the stress related variables, we've built a program that will give you all the benefits of both low and higher-rep training.

The exercises, while simplistic in nature, are the absolute best mass building exercises out there as they cross multiple joints and incorporate the largest degree of muscle mass. Exercises don't have to have a fancy name, or look completely unorthodox when performed to be effective. Much of the time, those exercises are simply attention grabbing gimmicks that are rarely effective, anyway.

The principles of this program are simple: a) train with big, compound, mass-building movements; b) train with high volume; c) train with the principle of specificity in mind; and d) periodically manipulate the stress related variables, particularly the set/rep scheme, to prevent stagnation and to get ALL the benefits that various rep ranges have to offer.

Maybe we can bring simplicity back to bodybuilding after all. One thing's for sure, doing a complex routine won't beat this program when it comes to putting on size!

Everyone says deep squatting is the only way to go. But is that right for your goals? Find out here.
Squat, Training
Dean Somerset July 18 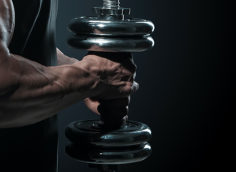 Have limited equipment? Here's how to build some meaty legs without a pile of 45s.
Training
Ryan Sapstead January 27

No motivation? Progress stalled in the gym? Here's how changing everything about your training can get you back on track.
Tips, Training
Eirik Sandvik January 6