I've got this friend, an Irishman, and his world is divided in two. There's soccer... and then there's maybe some other stuff. So it's no surprise he wanted his son to play soccer, too, just as he had and his father had and his father's father had – a legacy of pasty Irish legs running across the rocky fields.

The trouble was, his kid didn't want to play the game. Nope. Exercise of any kind wasn't on his infinitesimally short list of interests. He preferred devolving into some mythical creature who's half couch, half boy, destined to spend eternity gazing at a screen and periodically phoning Grandma to go into the kitchen and get him another grape soda.

But Dad tried anyhow. Pretty much forced the kid to join a team, but just before their first game, the boy asserts himself. Won't get off the sideline. Dad actually shoves him onto the pitch, but just before the first whistle, the kid does the passive resistance thing – he walks smack dab to the middle of the field and lies flat on the ground, arms outstretched and refusing to move. Mouths drop open.

He must have looked like a tiny Christ figure to any helicopters or surveillance drones flying by. The rest of the players looked confused but they played anyways, giving the wanna-be soccer martyr a wide berth.

After a few angry and befuddled minutes, the father and coach, their wills broken, went out onto the pitch and dragged the kid's limp body to the sideline. Remembrances of anti-war protestors no doubt filled the minds of the parents in attendance.

The father never tried to get his son to play soccer, or for that matter, any sport, again.

Maybe some of you parents can relate to that story, at least a little bit. You want your little bastards to play soccer, play tennis, practice taekwondo, do anything that would give them a little exercise, but you're up against an awful lot of electronic distractions and a culture that gives tacit approval to the physical inactivity of its youth.

In an effort to help, I started to think about finding a really simple exercise strategy for kids – one that involved some sort of basic resistance training – and I searched the research databases for some ideas.

There are plenty of studies involving children and adolescents, but who are they fooling? It's a foregone conclusion that any exercise intervention program is going to improve their posture, strength, muscle composition, body fat levels, and athleticism. You hardly even have to read the results.

Most of the studies actually got the kids on a traditional, adult-ish program involving a myriad of exercises, but I was looking for something much, much simpler, and I found it in a Japanese study from 2013. 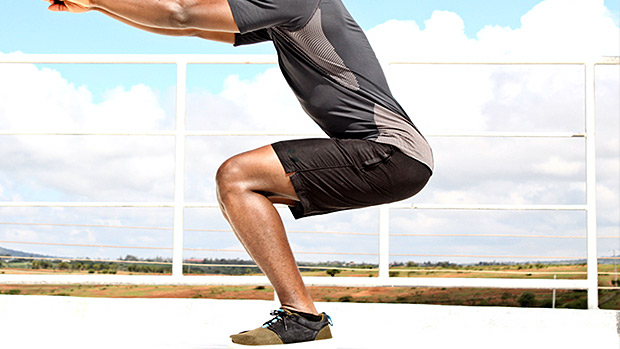 The Gist of It

Scientists from the National Institute of Fitness and Sports in Japan rounded up 90 young men (13.7 years old, +/-0.6) to participate in an eight-week study. Thirty-six of them were assigned to a training group and 58 were put in the control group.

The training group was required to do a 100 bodyweight squats a day for a total of 45 sessions. They were asked to squat until their thighs were parallel to the floor and to do one rep every two seconds. The average time to completion was about three minutes.

The students were required to do the bodyweight squats after school, and they even got holidays off. That's it.

After eight weeks, the kids in the training group lost a significant amount of fat, showed increases in lean body mass, and improved their vertical jump height.

You should also know that almost none of the boys in the study were like out-of-shape American kids. Nope, almost to a man (boy), they were all involved in some sort of extra-curricular sporting activity, like soccer, volleyball, track and field, swimming, kendo, or table tennis.

And if it worked that well for kids who were athletic and don't have to shop the husky section at Kohl's, imagine how it might work for kids who are largely inactive and a little bit squishy.

What do you think? Would your kids be up for it, or would they do the passive-resistance thing and refuse to move? Could you talk them into doing 100 bodyweight squats five days a week to improve their body comp, strength, level of fitness, and maybe even their self-esteem?

Their distracted minds could easily grasp a simple program like that, they wouldn't need much coaching, and you could even do it with them should they need further motivation.

And if 100 straight squats is too daunting because of their largely zero-gravity couch existence, there's no reason they couldn't break it up into more manageable chunks, doing maybe 10 to 20 reps, resting briefly, and then doing another 10 to 20 reps. And so on.

With any luck, this small start, this wee bit of exercise, could be the start of a life-long devotion to fitness, or at least something like fitness.

I've never fit in anywhere. Actually, I never really think about it. As a result, I usually leave a wake of mayhem and controversy wherever I go.
Training
Tim Patterson May 15

We don't have a picture of him in the article. We don't even know his name. But this alleged monster's training program was too compelling to pass up because of a technicality.
Legs, Training
Christian Thibaudeau January 24

Cut your time in the gym without compromising your results? It's a smarter and more effective approach to training.
Powerlifting & Strength, Training
Alwyn Cosgrove December 31

These exercises really don't work, and some even lead to injury. Here's why, plus some more effective alternatives.
Bodybuilding, Shoulders, Training, Traps
Dr John Rusin January 5