For the past 15 years, I’ve tried more training systems than I could ever recall. Like all of you, I wanted to find the most efficient way to build the most muscle without compromising my health, sacrificing my strength, or turning into a lard bucket. The goal is to be big, strong, and lean, while still running a business and having a life outside the gym.

Since many of my clients have similar goals, I’m constantly mixing and matching training protocols to figure out what works best for the greatest percentage of them. I’d never claim that any system works for everyone, much less that anything keeps working indefinitely. But I recently developed a new training template that works for most of my clients looking to increase their strength and size. I call it the Omnibus Method.

The program is loosely based on the conjugate method, a very effective training system popularized by Louie Simmons of Westside Barbell.

For years, the word “periodization” meant one thing — linear periodization, in which you develop one aspect of conditioning, then move on to the next, then the next. So you work on hypertrophy, then move on to strength, then power. The problem is that all motor abilities are codependent. If maximal strength decreases, which can occur during linear periodization, your ability to generate power will decrease. That’s going to affect an athlete’s speed of movement.

As Alwyn Cosgrove says, if the first quality was important to develop, why do you abandon it when you move on to the next one on your list?

For example, let’s say you have a shot putter. Even though his sport is all about power and technique, a loss of maximal strength is going to affect his performance. That’s why he trains with extremely heavy loads, even though the ball he throws weighs just 16 pounds.

The conjugate method addresses the weaknesses of traditional periodization by concurrently training different motor abilities in the same week. I’ve used similar protocols with the sprinters I train during their competitive seasons. They’re able to maintain a very high level of maximal strength and resist injury.

Obviously, I had to make some adjustments for those more interested in hypertrophy than pure strength, speed, or athletic performance. So let’s get into the details.

If you’re familiar with Westside training, you know it includes dynamic effort day, in which Louie’s powerlifters lift lighter loads as fast as possible. Instead of devoting entire workouts to rep speed, I instruct my clients to explode through every repetition of every work set.

But I kept one of the key features of Louie’s system: the systematic rotation of exercises. When you look at the workout charts below, you’ll see three or four different exercises in the first column. You’ll do a different one each week for three weeks, then repeat the sequence.

I’ll take an example from the first workout chart. Let’s say you choose these three exercises from the four I listed:

Starting with Week 4, you’d repeat the sequence, using the exercises in the same order. I’ve found you can use this system for three months and still see results, which is longer than I’d recommend using just about any other program.

You don’t have to use the exercises I’ve listed. If something else works the same movement pattern but serves your needs better, by all means substitute it in. Just don’t replace challenging compound movements with wimpy machine exercises. You won’t get the results you want if you make it easier on yourself.

For the first exercise of each workout, you’ll use a five-rep max (designated “5RM” on the charts), which means the most weight you can use for five good reps. This is a crucial point: I want you to use the same weight for all the work sets designated on the chart, even if it means you don’t get five reps on every set.

Suppose you’re using 250 pounds for back squats, and the workout calls for three sets. Your three sets might look like this:

Two of the workouts specify time under tension (“TUT”) instead of a rep max. Choose a weight you can use for the full 60 seconds. Again, increase the weight or the number of reps you do with the same weight the next time you do that exercise.

As you’ll see on the charts, you’ll do four exercises on lower-body days and five on upper-body days.

In the “Tempo” column, you’ll see a four-digit number. The first numeral is the number of seconds you should take to lower the weight. The second is the length of the pause (which is sometimes zero, meaning you don’t pause at all). Next is the speed of the lift. If it has an X, that means you want to lift explosively. The final number is the length of the pause before you lower the weight to begin the next rep.

So if it indicates 30X1, you lower the weight for three seconds, don’t pause, lift explosively, and then pause for a second before lowering the weight and repeating.

Finally, use a spotter when necessary — preferably someone stronger than you. 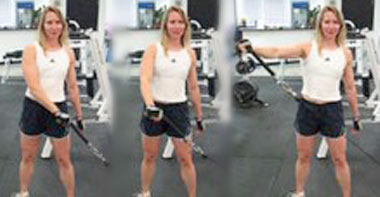 In my experience, this is an ideal program for anyone who wants to increase muscle mass and strength without sacrificing either quality to focus exclusively on one. It should be effective for 12 weeks, which means you’ll do each exercise in the rotation four times.

I find it works particularly well for busy adults who occasionally miss training sessions because of work, family, or sports conflicts. As long as you pick up where you left off, you should be fine. (Just don’t skip the workout you miss, especially if it’s your least favorite of the four.)

As with any other workout, it only works if you work — the more you put into it, the more you get out of it. Have fun, and let me know how it works for you.