In Part 1 I presented the training program and nutritional strategies I used during the first phase of my mutation. During that initial phase, I achieved significant fat loss while gaining a little muscle. However, I wasn't where I wanted to be in terms of body fat.

This second phase was aimed at lowering my body fat as much as possible in a three week period. I knew I wouldn't gain much in terms of muscle mass, but I intended to at least maintain what I already had.

I'll say it once and for all:

The purpose of strength-training while dieting is primarily to prevent muscle loss!

A lot of gurus these days like to use strength training exercises to burn fat by using long sets (15-20 repetitions) and short rest intervals (30-60 seconds). Their logic is that this form of training increases growth hormone output. Since GH is a lipolytic hormone (it increases fat usage), they argue that a training method causing a boost in GH will naturally lead to fat loss. This theory is interesting, but in the real world it's just not that effective!

Why? Consider that when a bodybuilder injects growth hormone, a minimum dose of two IU per day for at least three months is required to produce noticeable changes. Many bodybuilders even argue that below four IU per day is useless for body composition purposes! The medical dose recommended for GH is around 0.20 to 0.5 IU/kg per day, so for a 90kg individual (200 pounds) this comes up to a daily dose of 2.6 to 6.5 IU. And this is for medical use, which is often too low to cause any "bodybuilding" results!

As a comparison, the natural production of GH by the body varies from 1 IU to 2 IU per day (so maybe 0.25 to 0.5 IU during exercise). So it's unlikely that the slight, transient increase in natural GH levels from strength training would cause any significant short-term improvements in body composition.

We've been brainwashed by the various muscle magazines to believe that you should do high rep training for definition. This is absolutely ridiculous! Sure, you use a little more energy, but think about it: the higher the training volume, the more energy you need to recover. The more glycogen you burn while strength training, the more carbs you'll need to recover and progress.

While on a hypocaloric diet, your body has a lowered anabolic drive, meaning that it can't synthesize as much protein into muscle compared to when you're eating a ton. A super-high volume of work leads to a lot of microtrauma to the muscle structures; a lot of microtrauma requires a great protein synthesis increase. So if you use high-volume/low-intensity training while dieting, you'll break down more muscle and build up less. Not exactly good news!

Perhaps one of the greatest benefits of high-reps training is an increase in blood and nutrient flow to the muscles, but if you have a reduced amount of nutrients available in your body, this benefit is pretty much wasted.

So to force my body into maintaining this muscle mass, I decreased my training volume and increased the intensity factor. I also included more rest periods to allow for maximum recovery between sets so that I could lift more weight.

I know this type of training isn't commonly seen as a program to use for fat loss, but more and more bodybuilders now understand the benefits of lifting heavy while trying to lose body fat. One of the bodybuilders who believes in heavy training even while dieting is Skip La Cour, arguably the best natural bodybuilder in the world.

So, without any more chatting, here's my training program for Phase 2!

Objective: To maintain as much muscle mass a possible while losing a lot of body fat.

Monday: Chest and Upper Back

Alternate 100m sprint with 100m brisk walk. Complete as many intervals as possible. (I got anywhere from six to ten during this phase.)

B2. Crunches on Swiss ball

During this second phase I wanted to follow a low carb diet, but I felt that it might make it harder to maintain my muscle mass. I decided on a "carb rotation" diet instead:

This allowed me to get the benefit of low-carb days and caloric deficit without risking losing muscle mass. The moderate carb days also prevented loss of energy during my workouts and kept my glycogen reserves relatively full.

It would be too complex and repetitive to write down all my meals, so suffice to say that I ate seven times per day and consumed most of my carbs in the two meals following training. My protein and fat intake stayed the same during the week at around 500g and 50g respectively.

My first "meal" was in the form of Surge plus some Low Carb Grow!. The second meal included starchy carbohydrates such as rice, oatmeal or whole bread. Pasta can also be consumed, but with the amount of carbs allowed, this left me with a very small portion, which isn't very filling.

I also included 12g of good fats in the form of 6g of CLA and 6g of fish oils in each of the "real food" meals. Fat wasn't consumed in the shake meals. Low Carb Grow! was my choice once again. At each meal I ate a small portion of green vegetables. Broccoli, lettuce and spinach were the usual suspects.

All and all my energy stayed up during the whole phase which pleased me, as I sometimes go flat and lethargic on a "normal" low carb diet. This phase also proved to be successful as I dropped six pounds of fat (down to 211) while gaining strength, thus at least maintaining muscle mass.

I used several supplements during this phase; mostly supplements that would help me gain muscle mass and build strength while reducing body fat. I again used a lot of Low Carb Grow!, fish oils, and CLA. On top of that I also used daily:

As you noticed, I added HOT-ROX to the mix. Once again, it didn't let me down. I feel that HOT-ROX greatly enhanced my rate of fat loss while helping me maintain muscle mass.

The TRIBEX, M and RED KAT trio provided me with a natural anabolic boost. TRIBEX increased Testosterone production. M improved the Testosterone to estrogen/progesterone ratio, and RED KAT increased T levels via a different mechanism and drastically lowered SHBG, which meant that more of the added Testosterone produced would be in free form, the active form of the hormone. For people wanting to really increase their anabolic drive without touching legal or illegal androgens, I feel this is by far the most effective stack to use.

This second phase proved to be even better than the first one. I was also pleased with the results I got from the carb rotation plan.

Training went very well, except for some minor joint pain in the third week. My strength went up during this phase, which was a big bonus as I hadn't really expected it to. Overall I began to feel more solid and hard. It's probably just a psychological thing, but it made me feel good nonetheless. 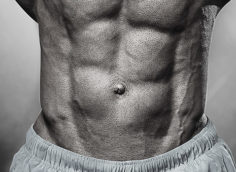 This bodyweight exercise might be too advanced for you. Check it out.
Training
Gareth Sapstead July 7

If women understand their hormone cycles, they can plan their workouts to get stronger and lose more fat. Here's how.
For Women, Training
Shannon Clark November 19