Many of the "challenges" that exist in the world of fitness and strength training were probably created by smaller men for smaller men... or by men who work with elite athletes on a regular basis.

As a guy that represents bigger stock, which makes up a larger population than many in this industry will acknowledge, I'm here to create something more realistic. But let's start with a rule that applies to anyone, big or small.

Do Your Ground Work

In your quest for strength and size, it isn't in your best interests to forego the things that helped get you big and strong in the first place. And we're not even talking about the primal movement patterns (squatting, pushing, pulling, lunging, etc.) that you're now overly skilled at since you practice them multiple times each week.

We're talking about the stuff you couldn't do as a skinny teenager when you started thinking about getting athletic, big, and strong – the push-ups and other bodyweight movements you dumped the moment you slapped on some size and discovered the bench press.

The ugly truth is that neglecting to practice those movements has probably taken its toll on your conditioning, your body composition, your mobility, and your athleticism, without you even being aware of it.

Movements That Will Crush Big Men

Don't forget, this info is geared towards big men. When you're tipping the scales at 240-plus, certain things can prove to be more challenging than they may be for our 165-pound friends, especially when you add unfavorable leverages to the mix.

It doesn't take much to jack up your cardio, get everything working, and leave you in a puddle of sweat, and for that reason I'll start with the obvious.

When I was 200 pounds, cracking out a set of 12-15 pull-ups was child's play. Doing it at 260 pounds was a different ballgame. And not being able to perform the way a gymnast does isn't an indicator of weakness.

I stole this movement from US Tactical strength and conditioning coach, Troy Burger. It's hard to imagine something so simple spiking the heart rate, addressing shoulder and hip joint mobility, and simultaneously turning into a good workout for the trunk and shoulders. Doing this athletic movement for reps or as part of a superset makes for a great conditioning tool.

If traditional push-ups are too boring, and you're too good for them, you'll change your mind when you add a deficit to one hand. The extra range of motion you have to push through with the top arm makes the movement unilateral, meaning you'll have to perform the same number of reps with each hand elevated. If you're using good form, this will train your entire body.

I've seen very little about this movement publicized in articles or videos, and I've never seen it given a name, either. So I combined the bird dog pattern with a bear stance position to create "bear dogs."

Keep the knees as close to the ground as you can and fight to achieve extension at the end points for the lifted arm and leg. This will truly test your trunk stability, along with challenging the mobility and available range of motion your shoulder and hip go through when performing each rep. These aren't easy and require full mental attention.

It's easy to do a bridge with your knees bent, but when the lever arms are larger, it asks a bit more of your hip extensors and abs. Use a light load overhead (10-20 pounds works just fine for big guys) and gun for reps on either side.

Use all the cues you've put into practice from your Turkish get-ups, deadlifts, pull-throughs, and other movements and apply them here, bracing the trunk, engaging the glutes and hamstrings, and achieving full hip extension on each raise.

Many lifters prefer to bring the toes up to the bar on hanging leg raises. In this big-guy version, use bent elbows, tuck the knees, and lever from the shoulder joint. This creates engagement in a similar fashion to the RKC plank – from both the top down and from the bottom up. Controlling the negative rep is also instrumental in maintaining engagement throughout the set.

Arranging these exercises into a mostly bodyweight-oriented workout plan could look something like this:

Alternating between day 1 and day 2 workouts for a week or two straight as a deload (or peppering them in intermittently through your program) is a smart thing to do for variety and for an athletic boost that ultimately augments pulling and pushing 300 pounds day-in and day-out.

If that's not enough to get your conditioning on point, consider adding one of these finishers to the end of your workout:

Everybody Talks a Big Game

I see big guys spit huge lies about their levels of fitness and athletic capability. Some of the simplest things can leave them on their back, simply because they're not accustomed to training this way.

Just because you're strong doesn't mean you're in shape. Strength is one of many components of fitness, and becoming a meathead is only half the battle to having physical fitness that lasts the test of time. Plus, your 600-pound deadlift won't prevent you from having a high body fat percentage or high cholesterol levels that lead to cardiac arrest.

Staying on top of it means focusing on workouts like these consistently, even if that doesn't mean every single day. I've never met a muscled-up guy well over 200 pounds who didn't have a rude awakening when faced with challenges that transcended pumping iron like a goon.

I'm not expecting big and muscular guys to ever ace this stuff. But if putting on mass and absolute strength has been your focus for years, then you should be bad at all this. As Dan John says, being bad at it is the exact reason you should be taking advantage of this stuff for results. At the end of the day, your body will thank you. 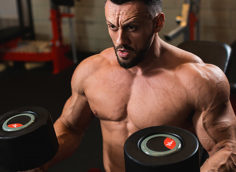 Oh man, this is gonna hurt. But it might be just what you need to get your delts growing again.
Training
Andrew Coates September 4 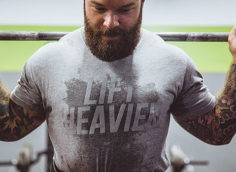 Use this handy guide before you go all-out with your next PR attempt.
Powerlifting & Strength, Tips, Training
Linden Ellefson August 27 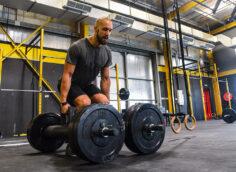