Leg training is painful, if you're doing it right. But intensely training your legs also does something amazing: in causes a natural surge in testosterone and growth hormone.

You may have already known that, but you may not have thought of this next part. What if you train your legs, get that hormone boost, and THEN train a smaller muscle group, like your biceps or triceps? Wouldn't it make sense that you'd get better arm growth due to the elevated levels of GH and testosterone?

Luckily, we don't have to theorize. A group of researchers at Lillehammer University College have figured out how to put those leg-training induced hormones to work for you.

The researchers recruited 9 males between the ages of 20 and 34 and had them follow a bodybuilding style program for 11 weeks. Two days a week, they trained only their left biceps with curls, hammer curls, and reverse curls.

On two additional days per week, they trained their legs with leg presses, leg extensions, and leg curls, followed by a training session for the right biceps, using the same exercises previously performed for the left biceps.

After 11 weeks, the right biceps, which had been trained during the same session as legs, was significantly bigger and stronger than the left biceps. The researchers found higher levels of GH and testosterone during leg plus arm-training sessions and concluded that they were responsible for the additional growth and strength in the right arm.

You can benefit from this research by adopting an innovative training split that takes advantage of this relationship between legs and arms.

So, leg training, because it's so damn taxing, causes a cascade of biochemical processes that lead to an increase in GH and testosterone. You can take advantage of this concept by training legs and biceps, or presumably any smaller body part (e.g., triceps), on the same day. However, you can take this information even further by building your whole routine around it.

Split Your Leg Training Up

Most people work legs once, maybe twice a week, and then pull the covers over their head until it's time to, groan, work legs again because it's scary and painful, but even beyond that, there's a problem associated with training legs.

Given the size of these muscles, it's just ordinarily impossible for most non-cape wearing mortals to work both groups equally well in the same workout. One muscle group ends up suffering and sulking, starving for attention and adequate stimulation.

It's therefore smarter to break leg training into two separate workouts, and in doing so employ the testosterone-boosting method discovered by the researchers with two body parts instead of one:

You get the muscle-building advantage of breaking the legs into two groups and devoting more sweat and effort to each, and you confer the testosterone/GH benefits to the triceps and biceps.

The other workouts in the training week or split can then be devoted to the larger muscle groups of the upper body (chest, shoulders, back).

GH, however, is spurred largely by protocols that elicit lactic acid. This generally means protocols that are relatively high in intensity (about 75% of 1RM), high volume, and with short or shorter rest periods.

While the testosterone-inducing exercises or protocols should be done early in the workout, the GH spurring movements can be done later, or last, in the training session. Doing both types of training prepares the right hormonal stew in which the biceps and triceps can simmer and grow. 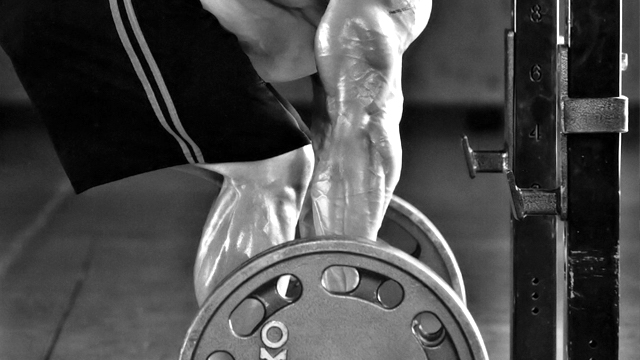 To take advantage of the findings of the researchers and other studies on testosterone and GH, we want a program that does the following:

Below is how this might look. Bear in mind that I've only laid out how you might train quads/triceps and hams/biceps. I've left out specific training suggestions for chest, back, shoulders, etc. because the testosterone/GH findings probably wouldn't work if you paired a big body part like chest or back with leg training.

Training legs properly, i.e., busting a nut, probably wouldn't leave you with enough mojo to properly train another big body part. It's like training quads and hams together in that one of the two gets the short end of the stick. Even with all that extra leg-training induced testosterone and GH, it still might not be enough to push the muscle meter to the plus side.

Feel free, though, to use the general testosterone and GH promoting protocols (heavy weights for low reps and high-lactic acid producing exercises) with chest, back, and shoulders.

Examples of GH-elevating quad-dominant movements (generally done with about 75% of 1RM that employ exhaustion-inducing protocols) to be done after testosterone-elevating movements like those mentioned above:

Examples of triceps movements (the first triceps exercise should use heavier weights done for fewer reps, 6 to 10, while subsequent exercises should use higher rep ranges, 10 -15, to target multiple fiber types:

Examples of GH-elevating hip-dominant movements (done with about 75% of 1RM that employ exhausting-inducing protocols), to be done after the testosterone-elevating movements above:

Examples of biceps movements (the first biceps exercise should use heavier weights done for fewer reps, 6 to 10, while subsequent exercises should use higher rep ranges, 10-15, to target multiple fiber types):

This template is only a suggestion and you may decide to flush it down the vortex of the training toilet. Fine, but you should at least try pairing leg training with biceps and/or triceps in general to see how the additional hormonal surge works for you.