The number four is the lonely, bastard child of the strength rep scheme. Everyone knows what a single, double, or triple is, but when it gets to "four" people suddenly develop weight training amnesia.

No one talks about their best "quad" rep set. They skip right over ugly number four and talk about "fives" like four never even existed. Why that is, I don't know. John Kuc, the first man to squat 900 pounds and who deadlifted a ridiculous 870 at a bodyweight of 242 pounds, did lots of sets of four in his training. Shieko, the Russian powerlifting system that's produced solid lifters, also uses sets of four throughout the programming.

Simplify to Get Strong

One of the biggest reasons many get stuck in a training rut is because, over time, they start implementing more ideas, more movements, and more set and rep schemes. Their training starts to resemble that of a buffet more than a basic meal of steak and potatoes. In essence, simplicity is lost, and along with that, so is progress. I've made this mistake many times over the course of my training life. Instead of being fixated on perfecting my steak and potatoes, I became distracted by all sorts of side items and the desserts that might follow.

In other words, you stop focusing on things like simple progression, perfecting technique of your big compound movements, and become far too interested in shit like bands, mobility, weak points, foam rolling, and assistance work. Do all of those things have a potentially productive place in someone's training paradigm? Sure. But not if the meat and potatoes aren't being first addressed as the most critical parts.

Any time you find yourself frustrated by a plateau, the best thing you can do is eliminate all of the bullshit you've been doing, and reel it back into simplicity. And that's where the Primer 4 Program comes in.

For the Primer 4 routine, we're going to pick 4 movements for the upper body and 4 movements for the lower body for the entirety of the program. They have to be straight-bar barbell movements as often as possible, and always free weights. No machines and no fancy bars. You can use dumbbells but keep their inclusion minimal.

Okay, so chin-up isn't a barbell movement, but we grant it a pass because it's hard to do and basic as hell.

The basic split here will be four days a week, with upper body and lower body performed twice a week. Pretty simple stuff.

Note: Despite what I've laid out above, the last set of 4 won't really be a set of 4. I'll explain that below.

Where the Magic Comes In

When I was developing my Base Building program and doing tons of different types of volume sequences (i.e., 5x5, 8x5, 5x8, etc.), I noticed that the third or fourth set in the volume sequence would often be my fastest and strongest-feeling set. Even though I'd already performed a lot of warm-up sets, once I got to my working weight I'd find that I often didn't hit my "groove" until a few sets in.

As such, we're going to take advantage of that insight and grease that motor cortex groove and perform more than 4 reps with that last set. To begin with, we have to establish what weight you'll be using for these sets.

When you pick the movements you'll be using, pick a weight that's your 10RM, but make sure you're honest with yourself and that you can hit about 10 clean reps with that weight. If you let a little ego creep in, the program will be less effective, so err on the conservative side. If you're a percentages guy like myself, it's going to be something like of 75% of your 1RM.

With that said, here's how you'll really perform the 4x4 volume sequence:

What About My Semi-Pronated Triceps Kickbacks?

I know, your mind is rebelling against doing so "little" work. I understand this battle. You feel like if you don't get in those one-arm cable side laterals that your already tiny shoulders are going to fall right off. I can assure you that won't happen. It can be hard to transition from doing 97 different movements and 15 different rep and set schemes, but often times too many variables in your training will kill progress rather than spur it on.

Another thing to keep in mind is that lots of guys do in fact train brutally hard without much to show in the way of results. At times, their enthusiasm can be the very thing that squelches progress. When they short circuit the training-to-recovery cycle, all the hard work can essentially be for nothing. The return on their effort investment can be minimal at best.

This routine eliminates complexity and puts the focus back on hitting a few rep PR's over the course of the training cycle. It removes the equation of trying to be really mediocre at a lot of things and forces you to get better at just a few things. Getting back to just keeping it simple is often the best thing you can do to start kicking ass again. 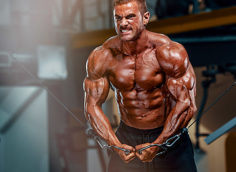 Build your pecs with this mechanical drop-set. Check it out.
Training
Gareth Sapstead January 2

You need to do more push-ups. And you need to start doing them right for once. Here's what you need to know.
Bodybuilding, Powerlifting & Strength, Training
Mike Robertson January 19