In one of last week's articles, The Beast Evolves, Coach Thibaudeau shocked the world with his physical transformation. 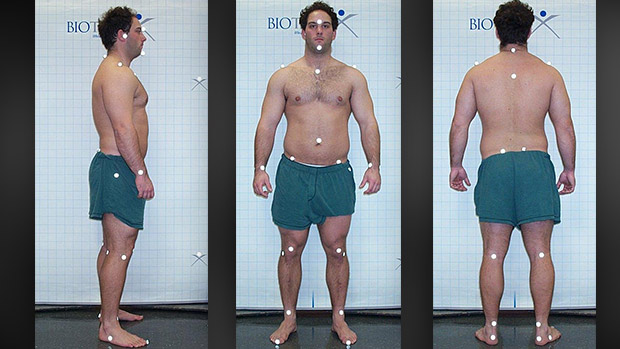 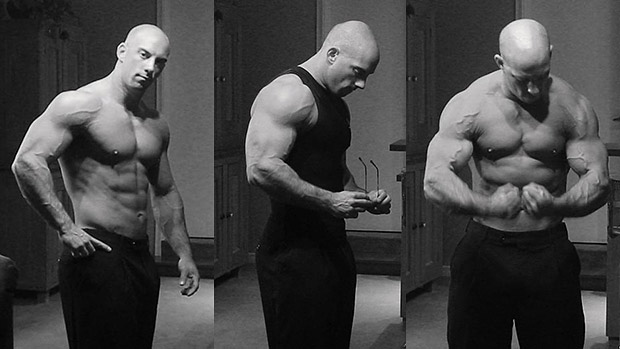 The pics were taken 14 weeks apart. Oh yeah, and I got a little haircut along the way!

Part of his evolution was due to a training program he developed called OVT or Optimized Volume Training. Previously, this program was only available to those that read the T-mag forum, but now he's making this updated version available to everyone. Fire up the printer; this could be the next big thing in bodybuilding!

Around 1995, the bodybuilding world was introduced to a new form of hypertrophy training: German Volume Training. That article was written by an up-and-coming star in the strength and conditioning community (Charles Poliquin) and it really changed the way people trained to gain mass. The premise was relatively simple: pick a few exercises and do ten sets of ten reps. It was simple and effective.

However, the program had some weaknesses, some of which were pointed out in TC's "German Volume Training 2000" article here at T-mag. A few of those weaknesses were:

Not enough emphasis on some muscles and some muscle functions. With GVT you couldn't use many exercises because the sheer volume would be too much! As a result, muscle imbalances could develop.

This final problem is new: GVT neglects strength. In fact, I've known several athletes who actually got weaker on GVT, even if they gained a lot of mass. The reason is that super high volume coupled with low intensity causes mostly non-functional hypertrophy and doesn't require an intense neuromotor involvement.

It was this last weakness that got me thinking, experimenting and tinkering. That's how I came up with a variation of volume training that will increase strength and functional hypertrophy alike. Enter Optimized Volume Training!

For OVT, I kept the basic premise of doing 100 total reps per muscle group. This is a time-proven approach. However, the distribution of those reps is vastly different from the original GVT program.

First difference: Every set is in fact a superset of two exercises working the same muscle group. The first exercise in the superset is a big compound movement (e.g. bench press, squat, deadlift, row, even clean or snatch) and it's done for five reps using as much weight as possible. The second exercise in the superset is an isolation movement for the main muscle being worked in the first exercise. This second exercise is also done for five reps, but with a small load and a very slow tempo.

Second difference: While in GVT all ten sets were of the same exercise, we'll employ two different supersets per muscle, each superset being performed five times (50 total reps per superset). This will allow us to use four different exercises for a muscle group, which should take care of boredom and imbalances.

Third difference: In the original program, the prescribed rest interval is sixty seconds. Since we want to be able to lift a bit more weight we're going to take 2 minutes in OVT, but there's no rest between exercises in the same superset.

Fourth difference: Rather than perform all sets with the same weight, as is the case with GVT, you do use as much weight as possible and adjust the load after each set (plus or minus 5 to 10 pounds, depending on the ease/difficulty of the preceding set).

Don't worry if you don't grasp all of that right now. I'll provide a complete sample program below!

Because of the high demands of the program, each body part is only worked once per week. The following split is to be used:

While exercise selection can vary according to your preferences, the following has been proven very effective:

Abs are done according to individual preferences. If you need some ideas, checkout my ab training article here.

Note: If you're unfamiliar with any of these exercises, just type the name of the movement into the search engine and you'll find a description and probably a photo or two.

Exercise variation is important. For OVT, I recommend using blocks of four weeks of training. Perform the same exercises for four weeks, then choose other exercises and complete another four week block. A complete cycle of OVT lasts eight week, after which you should engage in an easier form of training for one to two weeks to allow for the maximal delayed effect.

For the second exercise of each superset, load progression isn't as important. Its role is mostly to increase training volume and total time under tension (TUT). If you can increase the load in this exercise, great! But as long as you're progressing on the heavy exercise you'll be fine. The important thing is to go as heavy as possible for the first exercise of a superset while using a light, controllable load for the second one.

I firmly believe that a new door has been opened as far as gaining size is concerned. Not only will OVT give you a lot of new muscle, but that new muscle will be functional and you'll have the strength to go with your size!

Some of the biggest quads in sport are built on bicycles. Here's are two leg blasting bike challenges you can do in the gym.
Tips, Training
Dr John Rusin January 26

It's a good exercise, but most people screw it up. Here's why.
Abs, Tips, Training
John Romano June 4
Bring on the Pain-Upper Body
Training
Ian King June 1