When a Hollywood actor bursts onto the big screen with some new muscle, there's always a lot of hoopla surrounding what he did to obtain that look. The usual drivel from spaghetti-armed twat-waffles revolves around what his cycle looks like.

Never mind that in some cases, like with Hugh Jackman, it took these actors years to transform their physiques into something respectable for the silver screen.

And here's a fun fact – a lean physique looks visibly larger onscreen than a gluttonous hot dog eating dad-bod. A lean 180 pounds on the big screen is far more appealing and actually looks more jacked than 240 pounds of neck rolls and love handles.

I've talked with various Hollywood trainers, and there's a "recipe" they all use to get their clients looking jacked for their roles. And it actually doesn't involve growth hormone, testosterone, or clenbuterol.

Sure, if the actor is overweight, the coach must work on getting him lean. If he's needing more muscle, the goal must be to gain a few pounds of lean mass while keeping fat gain to a minimum. But there's more to it than that. And this is what the average lifter can focus on if he's wanting to achieve the superhero or action star look.

There are three areas of musculature coaches prioritize to get that "quickly jacked" look for their clients. It's the top shelf of the torso: the traps, delts, and upper chest.

Bringing up these areas as quickly as possible will give that "woah, he musta done a cycle!" look to their clients. When you combine that with a fairly lean physique, it pops on the big screen, and usually gives people the impression that the actor gained more muscle than he actually did.

And yes, it can do the same for you. But first, you have to get your body fat low enough to show those muscles off. So before we get into the building portion, let's talk about diet and cardio.

Believe it or not, the coaches that deal with these celeb clients aren't surfing through PubMed to find the latest research to get their clients looking sharp. Here are the sentiments I've heard:

It's almost like they took this approach right out of the Bro Bible... you know, the one that people slam all the time for being based on trial and error rather than studies. The truth is, bro-diets work. They don't actually go against any science and they keep the process very simple.

One other thing – the gaining phase was only implemented if the actor was lean to begin with. If not, it was accomplished before the force feeding began.

Their guidelines are very much like stuff you'd read out of old muscle mags:

Strangely enough, there was no talk of counting calories. As long as food was kept to minimally processed sources, it was simply increased or reduced in serving size for each goal. In other words, in the fat loss phase they simply reduced overall quantity of foods, rather than focusing on exact calories and macros.

Before all the calorie and macro counting, this was also how Arnold and company approached their mass gaining and fat loss phases.

I'm big on counting calories and macros, but I also know that if you're simply selecting nutrient dense, minimally processed foods, you'll often end up in an energy deficit, especially if you're minding your portions, lifting, and doing some cardio.

There were a few approaches. Since there's no fat loss benefit or advantage of HIIT over steady state moderate intensity cardio (1), they simply went with the one the client preferred.

Trainers prescribed more cardio during fat loss phases and less during mass phases. It was never completely taken out during either time, just increased or reduced to reach the goal. For fat loss, a daily cardio session that was separate from the lifting was the norm. Ten to fifteen minutes of it post-weight training was commonly used during mass gaining phases.

As noted, bringing up the traps, delts, and upper chest was the focus in all scenarios. Let's break it down:

For the Upper Chest

As you might expect, trainers prescribed a lot of incline chest work. This meant incline pressing variations, incline flyes, and cable work. The two best variations here are the low-incline Smith machine press and the low-to-high cable crossover.

I recommend working the chest in the mid-range position with the low-incline Smith machine press. It keeps the front delts out of the movement more than a high-incline press.

I prefer the low-to-high cable crossover over an incline dumbbell flye because it matches the strength curve more appropriately. With an incline flye, the loading is greatest in the lengthened position with a big drop-off in the mid range, with basically no resistance as your hands come together at the top as the pecs shorten.

With the low-to-high cable crossover, the lengthened position is loaded the greatest, and the resistance curve descends but doesn't completely evaporate as the pecs shorten in the finished position. This is more ideal.

No movement gets those more shortened than the standing cable Y-raise. And if you superset those with the cable lateral raise, you'll really be cooking with gas.

There was a consensus about heavy pulling variations. Some liked deadlifts, some liked trap-bar deadlifts, and some liked rack pulls. Some form of loaded carry also seemed popular.

I'm not a fan of conventional deadlifts from the floor for upper-back work. Despite the internet's love affair with them, they actually serve best as a glute, hamstring, and erector developer. The muscles of the back work in an isometric stabilizing role for the spine.

Block or rack pulls from below the knee are a good option because the positioning is more prone to scapula protraction in the bottom, where the upper back is a bit more lengthened and there's less contribution from the legs.

Shrugs were also used as a means to develop the upper traps. I found that paused shrugs in conjunction with overhead plate raises, which actually do the best job of getting the traps fully shortened, are a pretty good combo to bring up the traps very quickly.

It would be tough to go wrong with rack pulls, shrugs, and overhead plate raises to bring up the traps really fast. There was also an emphasis on upper back training overall as well, such as pulldowns and row variations.

All of these guys still had their clients do some form of leg work like squats, lunges, leg curls and the like. But the priority was the top shelf of the torso.

To add these moves and muscle groups, I'd just plug them right into a push, pull, legs split. Then follow the plan below using enough weight to take all prescribed sets to muscular failure.

You're also going to see a four-digit number that might look something like this: 4020. That's the tempo you want to aim for on each rep. Here's a breakdown of what that'd mean:

Note: Warm-ups are not listed (yes, you should still do them).

Back & Biceps (Emphasis on Upper Back and Traps)

Most of the stuff that trainers use to get movie stars looking jacked isn't revolutionary stuff. And despite the constant claims of anabolics and GH use, there was no mention of that anywhere.

I'm not telling you some actors haven't used anabolics to get ready for a role; I'm saying that looking jacked for the big screen has more to do with creating the "swole" illusion and less to do with gaining the sheer mass of bodybuilder-esque proportions. Sorry, bench and curl guy. It's not the arms that make a dude look suddenly huge. It's basically the yoke.

It'd be really hard to go wrong with following the protocols above. As long as you're consistent with them, they'll work. That's ultimately why a lot of these guys make some pretty awesome transformations. Actors, like physique competitors, are driven. So when they pursue a training and dietary protocol, they tend to have a high degree of motivation. They also tend to have millions of dollars and the free time to do nothing but train, eat, and sleep.

If you wanted to get mega-jacked in the next five months, decide be 100-percent compliant with your dietary approach. Choose to train harder than you've ever trained. You'll be surprised at how many people think you might have done a cup or two of the sauce.

Train your back like it's your job. Undo the damage from chronic sitting and limit the consequences of too much benching. Here's what to do.
Back, Training
Ben Bruno February 23 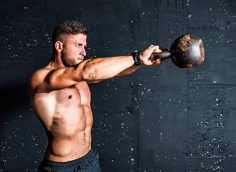 This brutal home workout set the internet on fire... and built a lot of calluses. Here are three new, slightly easier ways to do.
Training, Workouts
Dan John August 28

Here's a better way to plan your sets and reps that prevents burnout and leads to more size and strength gains.
Tips, Training
Charles Staley September 23

Sure all the pros are roided out to their mutant gills. That doesn't mean we can't still learn some incredibly valuable back-training tips by observing how the big bastards train.
Training
Jimmy Smith March 17