A typical bodybuilder would be pleased to add 14 pounds of muscle to his physique in a six-month period. Fourteen pounds in two weeks seems almost impossible. Yet it happened right before my eyes.

Get this: Jordan trained only once a week and did just one set of 8 exercises. Each workout was completed in less than 30 minutes. Overall, he trained six times in six weeks and built 21.25 pounds of muscle. But almost two-thirds of his gains occurred during the first two weeks.

I'd call that a growth explosion. 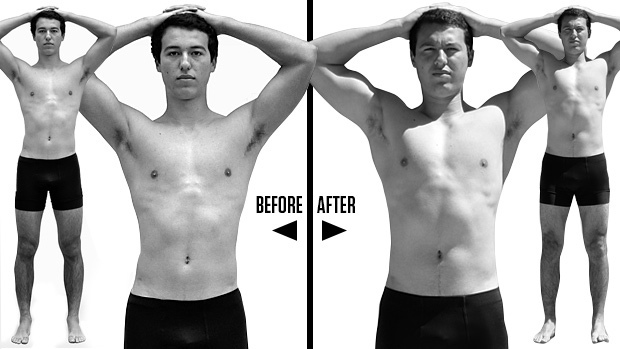 Jordan Rapport, at age 17, was 6 feet 2 inches tall, and weighed 184.5 pounds. In six weeks, training only one time a week, he added 21.25 pounds of muscle. His before-and-after measurements revealed he increased the size of his upper arms by 2.5 inches, his chest by 3 inches, and his thighs by 4.25 inches. Most of Jordan's results were stimulated during the first two weeks, as he gained 14 pounds during that brief time.

Looking Back at Negatives

Over the last 47 years, I've hammered myself and my trainees with various ways to emphasize the negative or lowering part of an exercise. Why? Because Arthur Jones, Casey Viator, Mike and Ray Mentzer, Boyer Coe, Lee Haney, Dorian Yates, and dozens of old-school bodybuilders experienced that negative training was a productive way to build muscular size.

Bottom line: Negatives just didn't seem to work for more than a few exercises and you soon lost interest. I hear you. Ordinary negatives can become a real drag and sometimes they're even dangerous.

I firmly believe that the right type of negative training makes a deeper inroad into a person's starting level of strength. Such a deeper inroad then stimulates growth hormone from the pituitary gland, which is an important aspect of muscular size increases.

What I'm going to share with you today is not ordinary. It's something I've been working on for more than five years. In an effort to try and test various ways to accentuate the negative, I came up with a discovery:

Negative training works best if you can control what's happening yourself, without having to depend on a training partner, spotter, or specific machine.

Note: My teenage trainees were not into competitive bodybuilding. They were athletes – involved in football, lacrosse, and rowing – who wanted more muscular size and strength for their sports. 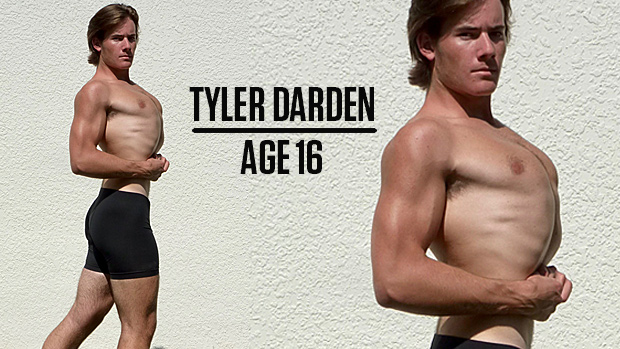 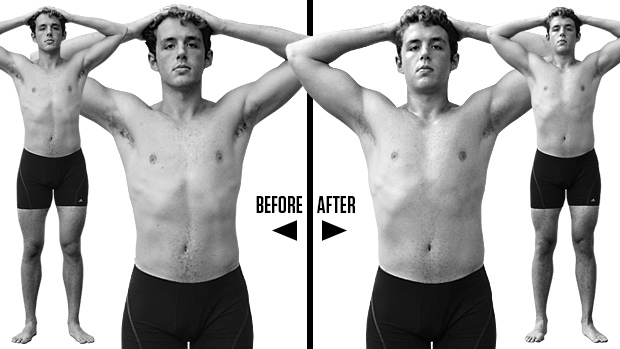 My new technique is named 30-10-30. That stands for a 30-second slow negative repetition, followed immediately by 10 faster positive/negative reps (one second up, two seconds down) with controlled turnarounds, followed by a finishing 30-second negative rep. The entire set takes approximately 90 seconds; 70 seconds of it involves what I call "negative uncontractions."

This is important: The name 30-10-30 involves more than those meaningful numbers. In practice, the 30-second negatives can vary from 15 to 30 seconds. Frequently, a trainee can manage the first negative repetition in 30 seconds but can barely get 15 seconds on the finishing negative. Thus, on his workout sheet, his notation would read "30-10-15."

Or sometimes, both the first and second negative might be a little too fast, so the notation might read "25-10-25."

The idea is always to work to momentary muscular fatigue on the in-between positive-negative repetitions and the finishing negative.

When you can complete any exercise in 30-12-30, that is the signal to increase the resistance by 3 to 5 percent for your subsequent workout.

Below is the 30-10-30 routine and the order of the exercises. You'll do all eight exercises in every workout, one set for every movement. Each once-a-week workout should take about a half hour.

At the end, I'll provide you with a detailed breakdown of how to perform each of these exercises using the 30-10-30 technique.

First, for the best results, don't assume that more is better. Performing the described routine two or three times per week is not better than one time per week.

All of my teenage trainees were students, students who were in school and on the move with extracurricular activities almost every day. Please note: A lack of vigorous activities on your non-training days, especially during the first two weeks, is an important aspect of explosive growth.

Second, once-a-week training forces you to focus sharply, do each phase of each repetition with calculated precision, and push your body carefully to all-out intensity. Your undivided attention is necessary during each 90-second episode.

Third, food is secondary to training, but it is still important. Each young man was instructed to apply a formula of taking his current body weight in pounds and multiplying that number by 20 calories. All three of the guys pictured weighed approximately 180 pounds at the start, so they consumed from 3,600 to 4,000 calories each day for the first six weeks.

The meals were at least 50-percent carbohydrates. Protein shakes were encouraged, as was creatine monohydrate. Each trainee was given containers of Biotest's Metabolic Drive® Protein and micronized creatine. Plus, each guy drank one gallon of cold water each day.

Fourth, teenagers frequently have too much stress in their lives. Destressing was encouraged in the form of stretching and self-massage with balls and foam rollers.

Fifth, extra rest and sleep is a must. Teenagers and their growing muscles need from 9-1/2 to 10 hours of sleep each night. Also, a 20-minute nap in the afternoon is beneficial.

Give 30-10-30 a try, perhaps initially on just two exercises. Do them several times until you fully understand the technique. Then, commit to the 8-exercise routine for two weeks, and two more weeks, and a final two weeks.

Yes, significant amounts of muscle can be stimulated and reinforced to grow by teenage boys who are serious about using 30-10-30.

Proper application of 30-10-30 triggers seldom-incited hormones to surround, permeate, and enlarge the stimulated muscle fibers... almost immediately. And it's not just for teenagers. Adults of all ages can achieve noticeable results in a few weeks with 30-10-30.

Focus, push, and rest. You're going to like the results. 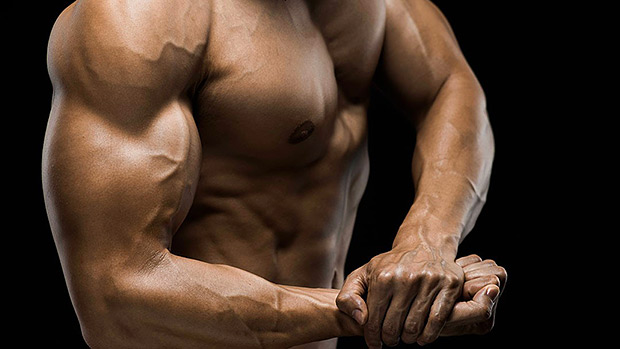 Here's a description of how to do each phase:

Leg curl the movement arm efficiently to the contracted position. Pause and look at the watch or clock and get ready to begin the first negative.

Lower the resistance slowly, inch by inch. Be halfway down at 15 to 20 seconds and three-quarters down in 25 seconds. Reach the bottom in 30 seconds but don't rest.

Curl the resistance arm in 1 second to the contracted position and lower in 2 seconds to the bottom. Try to do 10 reps, in good form. Hold the 10th rep in the contracted position and stabilize your body for the finishing negative. Lower the resistance slowly. Be halfway down in 15 to 20 seconds and try to reach the bottom in 30 seconds. Write your ending numbers on your workout sheet.

Place a barbell inside a power rack. Make sure you have two horizontal restraint bars placed properly in the lowest depth position of your range of movement.

Position the loaded barbell behind across your trapezius muscles. Lift the bar from the hooks and move back one step. Place your feet shoulder-width apart, toes angled slightly outward. Keep your upper-body muscles rigid and your torso upright.

Bend your hips and knees slowly. Descend gradually to the half squat position in 15 to 20 seconds. Reach the bottom position, in which your hamstrings firmly contact your calves, in 30 seconds. Make the turnaround gradually from negative to positive and perform 10 barbell squats at the speed of 1 second for the positive and 2 seconds for the negative. Push yourself to complete 10 reps, but remember, the regular reps may vary between 8 and 12.

After your last rep, get ready for the finishing negative. Bend your hips and knees smoothly and slowly. Hit the halfway mark at 15 to 20 seconds and the three-quarters mark at 25 seconds. Keep your focus and continue breathing freely. Transfer the bar to the bottom restraint bars at 30 seconds and rest.

There are various types of calf raise machines. The one described here is the standing version in the Smith machine. Locate a sturdy block or a secure portable ledge to stand on.

Adjust the level of the bar to a couple of inches below your shoulder height. Step onto the ledge with the balls of your feet and place the bar on the back of your shoulders. Stand and lift the resistance. Keep your knees stiff. Get as high as you can on your tiptoes and pause briefly before you begin your first negative.

Lower your heels very slowly, half inch by half inch. Try to be halfway down at 15 to 20 seconds. Reach the bottom at 30 seconds, stretch briefly, and get ready for the regular reps. Raise your heels in 1 second to the top and pause briefly. Do the negative phase in 2 seconds and pause briefly and stretch. Continue for 10 reps. Hold the 10th rep at the top and begin the finishing negative.

Lower your heels very slowly. Be halfway down at 15 to 20 seconds. Keep your knees locked. Do a deep stretch at 30 seconds.

Grasp the pulldown bar using an underhand grip with your hands shoulder-width apart. Stabilize your lower body properly. Pull the bar down to your chest and pause briefly, with the bar touching your upper chest. Your elbows should be down and back and holding steady. Get ready to begin the first negative rep.

Unbend your arms and begin raising the bar slowly. Be halfway up in 15 to 20 seconds and three-quarters up in 25 seconds. Reach the top and stretch your arms at 30 seconds.

Turn the resistance around smoothly. Pull the bar down to your chest in 1 second. Raise the bar to the top in 2 seconds. Continue to lower and raise for 10 reps. Hold briefly at the bottom of the 10th rep and begin the finishing negative. Raise the bar slowly. Be halfway up in 15 to 20 seconds. Stay in control. Reach the top and stretch your arms and upper back at 30 seconds.

Lift the bar to a supported position above your sternum. Lower the barbell slowly to your chest in 30 seconds. Make a smooth turnaround and press the barbell in a normal manner for 10 reps. Do a finishing negative in 30 seconds. Have a spotter handy to help you get the barbell back to the support racks at the top.

Take an underhand grip. Stand and curl the weight to your shoulders. Anchor your elbows firmly against your sides. Lower the weight slowly to the bottom in 30 seconds. Curl the weight in a normal manner for 10 reps. Keep the movements steady and don't rest between reps. Do a finishing negative in 30 seconds.

Load a bar with approximately half the resistance you use in the barbell curl. Take an overhand grip. Anchor your elbows against your sides and reverse curl the bar to your shoulders. Keep your wrists stable and slowly lower the bar to the bottom in 30 seconds. Don't rest. Reverse curl the barbell under control for 10 reps. Try to do a finishing negative for 30 seconds.

The best scientific review of negative and positive exercise is found in Dr. Mark Roig's, "The Effects of Eccentric Versus Concentric Resistance Training on Muscle Strength and Mass in Healthy Adults: A Systematic Review with Meta-Analyses," British Journal of Sports Medicine 43: 556-568, 2009.

For a more detailed discussion of 30-10-30, see my new book Men's Health Killing Fat, which is available on Amazon.com. For advanced negative-accentuated routines for bodybuilding, see my illustrated manual: The New Bodybuilding for Old-School Results.

Our most fundamental belief concerning weight lifting may be wrong. It could very well be that we have it backwards. Let the controversy begin!
Bodybuilding, Training
Chad Waterbury June 19

The Voyer Shrug is for anybody that has a slouched posture, shoulder problems, is preparing for an intense strength phase, or just wants to tap into some new growth.
Shoulders, Training
Christian Thibaudeau August 25

From basic to advanced progressions, here's how to finally nail this move without falling down.
CrossFit, Legs, Squat, Tips, Training
TJ Kuster September 29