Iron-world historians believe the deadlift may be the world's oldest strength training exercise. In less civilized times, deadlifts were performed with rocks, logs, and other formidably heavy objects as feats of strength in primitive strongman competitions.

By the 19th century, aspiring lifters started to use the deadlift as an exercise to build strength, muscle, and power. Today the deadlift, along with the bench press and squat, is one of the contested lifts in competitive powerlifting and is a strength training staple.

Yet despite such noble pedigree, few recognize the important role deadlifts can play in a Mixed Martial Artists' strength and conditioning program.

A casual search on the Internet will reveal videos of fighters performing increasingly exotic activities, leaving the impression that MMA conditioning programs have taken a turn toward a Coney Island sideshow.

While some of these routines may have their place in a MMA fighter's strength and conditioning routine, the deadlift remains the most effective exercise for building the posterior chain (glutes, hamstrings, adductor mangus and lumbar erectors), which is crucial for almost all physical movements in MMA.

The deadlift's basic action is picking a weight off the ground, forcing the posterior chain to lift a load that's in front of the body. A strong posterior chain is essential for executing explosive fighting movements, from shooting a double leg takedown to delivering a knee strike from a clinch, and enables a more explosive hip throw or 'heavier' hips when sprawling to prevent a takedown. This is the definition of real-world "functional training."

Deadlifts are also highly effective for building power and are one of the simplest ways to enhance rate of force production (RFD), or how quickly a person can develop tension in a muscle. This is important for any type of striking or grappling movement and in many situations specific to the cage, ring, or mat.

The nature of the average mixed martial arts bout is one in which the fighter will alternate between extended periods of moderate energy output and short bursts of explosive activity.

The majority of an MMA fight is spent jockeying for an advantageous position by trying to create openings to implement one's technique. This working for position is seen at all ranges (striking, clinch, and grappling). From the striking range, a fighter may be feigning to set up an overhand right, from the clinch a fighter may be looking to establish a deeper underhook, and from the grappling range a competitor could be slowly adjusting his hips to set up a sweep from guard.

These activities of continuous moderate energy output are disrupted when a fighter must quickly develop tension in a muscle by throwing that overhand right, using that underhook to attempt a takedown, or exploding from the bottom position to go for a sweep. Therefore, enhancing rate of force is crucial for the successful execution of all explosive movements found in MMA.

One way to increase RFD through the deadlift is compensatory acceleration training (CAT), popularized by Dr. Fred Hatfield in the 1980s. CAT is done with the assistance of resistance bands and chains that increase tension as the weight is lifted off the ground, so the resistance is heaviest at the top where most are the strongest.

This type of training is called accommodated resistance and complements the strength curve of the lift, allowing for maximum strength to be built.

Check out the following video for an example:

If the athlete doesn't lift the weight fast enough, he won't successfully complete the lift, as the tension is increasing. Think about a Thai kick, a double leg takedown, or an arm bar from the bottom; in each case the hips accelerate as you progress through the movement. This is the deadlift providing functional training for MMA.

You shouldn't be using straps when you deadlift as it's the ultimate exercise to increase grip strength. Increased grip strength is a very helpful adjunct for all martial arts that involve throwing, grappling, or holding an opponent, but the importance of a strong grip is especially important in an MMA fight.

With the MMA glove inhibiting hand movement, grip strength must compensate for the decreased dexterity in the fine motor skills of the fingers, most evident when fighters are battling to finish or defend a rear naked choke. Ultimately, the hands transfer power from your body to an opponent, and grip strength can make you or break you in fighting.

The conventional deadlift has a much greater dynamic correspondence to fighting than the sumo deadlift and is a more effective posterior chain builder. However, the sumo deadlift can't be dismissed for fighters looking to build more quad strength as well as adductor strength (the 'squeezing muscles' in the legs).

Many MMA fighters have long ignored the adductors, but an increase in adductor strength will enable a more powerful guard and tighter submissions. Any submission that requires the squeezing of the legs together (straight arm bars, knee bars, and triangle chokes) will improve with stronger adductor muscles.

Strengthening the posterior chain with the deadlift may even reduce the chance of injury. Strength coach and TNation contributor Eric Cressey states that weak hamstrings can greatly exacerbate the chance of an ACL injury (one of the most common injuries among wrestlers and MMA fighters), patellofemoral pain, and many other problems in the hip, lower back, knee, and ankle.

Machines like leg curls won't sufficiently strengthen the posterior chain, and can lead to overuse injuries as stabilizer muscles go unused and movements are in a fixed plane of motion.

Some reminders for proper deadlift technique:

It's very important for fighters to pick functional training exercises in the true sense of exercise science, not just passing Bosu and vibration-inspired fads. Deadlifts work virtually every muscle in the body and act as a powerful catalyst for muscle growth, provided sufficient calories and protein are consumed.

Lastly, don't overlook the favorable spike in the natural production of growth hormone and Testosterone a solid deadlifting session can elicit.

With the deadlift you've found a way to gain overall body strength, work the posterior chain, aid in muscle gain or fat loss, work forceful hip and knee extension, build grip strength, and increase mental toughness and overall speed. Include them in your holistic approach or get left behind!

You can't develop a weak or unresponsive body part with the exact same training techniques that made it that way. So try this.
Bodybuilding, Training
Scott Abel April 6
No More Back Pain
Training
Ian King October 31 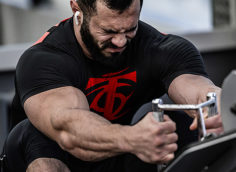 Burnout is real and it's holding you back. Here's how to identify it, prevent it, and cure it. A must-read for hardcore lifters and athletes.
Training
Christian Thibaudeau August 10
One of the most common areas of confusion for bodybuilders and other athletes engaged in resistance training is the question of the appropriate or optimal number of reps and sets for any given workout session or cycle.
Training
Charles Staley October 27