Admit it. The title of this article reeled you in like a fish on a hook, didn't it? That's okay, nothing wrong with wanting big, chick-attracting pecs. But wait, you may be thinking, what's that Waterbury cat doing writing a hypertrophy-specific article? He usually writes articles about strength, not (gasp) cosmetic bodybuilding! Has he gone soft on us? Has he sold out? When we see him next, will he have shaven his legs?

Um, no. The truth is that this program is going to lead to huge strength gains, just about as huge as your chest will be when you've completed this pectoral massacre!

I must admit that I'm a little biased about hypertrophy issues. When someone comes up to me and says, "Dubya, how do I build guns like Ronnie Coleman?" I stare at his 155 pound frame and I'm quickly reminded of the things in this industry I really don't like. But when a well-meaning fella pleads for advice on how to build a huge chest, well, I quickly show my softer side and hook him up with a fast and effective program – the very program in this article!

When most people think of chest training, they think of bench pressing. There are scads of variations: wide-grip flat barbell, semi-supinated grip incline dumbbell, nude decline bench barbell, yada, yada... I know many well-intentioned individuals who've tried to build a massive chest by performing various angles of the bench pressing movements in their programs. The theory is that incline presses work the upper pecs, flat bench presses work the mid-range (even though it doesn't exist), and decline presses work the lower pecs. Yikes! Any anatomist would quickly change careers if an individual came to him with such statements. Changing angles is great for many purposes, but if you want a huge chest you'd better look further!

One of the more interesting attempts at building massive pecs was the incorporation of accommodating resistance. An example of this would be to place resistance bands around the barbell on a flat bench press. The idea is to match the resistance of the load with the force capabilities at various joint angles.

For instance, since your ability to generate force at the bottom of the bench press is less than the top, the band is relatively slack at the bottom while taut at the top. Makes perfect sense, doesn't it? Well, there's one big problem with that technique. The bands are accommodating resistance to the triceps, not the pecs. Therefore, such a technique is awesome for building triceps strength and size, but lackluster for enhancing the pectoral musculature.

Biomechanics of the Pectoral Muscles

In order to create an extremely effective chest-building routine, an adequate understanding of pectoral biomechanics is necessary. The actions of the pectoral muscles are to medially rotate, horizontally adduct, and extend the shoulder joint. The latter two actions are taking place when performing any bench pressing variation. But if your goal is maximum hypertrophy of the pectorals, you must focus on the action of horizontal adduction. The other two actions will do very little for hypertrophy since they're secondary functions.

But the real problem lies in the line of resistance of the load. Let me explain. It's time to play weight-room physicist. Imagine you're standing directly behind a trainee's head who's performing flat bench presses. Now image the barbell is pressing up and down while you analyze the shoulder joint. When the barbell is on the chest, the elbow joint is approximately 75 degrees (more or less depending on the trainee's skeletal structure). At this point draw a straight line (perpendicular to the floor) that represents the line of resistance. Since gravity is trying to pull the barbell straight down, the line of resistance is straight down. This vertical resistance is great for extensors (i.e. triceps) but sub-par for a muscle group that horizontally adducts the shoulder joint.

Therefore, the pecs are firing to a large degree when the load is on the chest, but this decreases as the load (the barbell) is pressed vertically and the triceps take over due to their ability to generate more force as the elbow joint extends. Some have tried to overcome this deficit by attempting to "pull" their hands together while simultaneously pressing the load. Nice try, but still missing the boat.

Which should you choose? How about both! Here's how to do it.

This is one of the best chest building exercises I've ever come across, and very few people even know about it! The slide push-up applies resistance to the horizontal adduction action of the pectorals.

To perform this exercise you must first go to the local discount exercise equipment store and purchase one of those "slides" you used to see on every 2-AM fitness infomercial. You know, the one where the hot fitness bunny wears "booties" and slides side to side while you stare at her in a slow-digesting protein trance? The slide should be relatively cheap since they're no longer the latest fad device (look for one piled in the back corner of the store next to the Thigh Master and ab crunching garbage). Your gym's aerobics studio may also have some lying around.

Note: Slide push-ups can also be performed on a linoleum or wood floor with a small towel under each hand.

Put the "booties" on your hands (or towels under your hands) and assume a traditional push-up position where your body is perpendicular to the slide. Your hands should be slightly wider than shoulder width apart. Lower yourself until your chest touches the slide, then push up while simultaneously pulling the hands together. At the top position, the thumbs should almost be touching.

Next, "walk" your hands out to the original starting position (hands slightly wider than shoulder width) and continue for the prescribed repetitions. If you're advanced, "push" your hands out to the starting position instead of "walking" them out. For this exercise, it is best to increase the reps first. Once you can perform 10 sets of 5 reps, increase the load (add weight).

Increase the load of this exercise by wearing an X-Vest or similar. If you don't have one, buy one. If you just can't afford one, have a partner place a plate on your upper back between your shoulder blades. Go easy on the load at first!

This exercise adequately matches the 45-degree line of resistance to challenge the horizontal adduction actions of the pectorals, but you'll need access to cable crossover stacks that have a low pulley under each stack. There's really no alternative to this exercise, so I hope you have (or find) a dual cable stack.

This is an awesome chest-builder that seems to have disappeared over the decades (obviously, most bodybuilders don't understand physics). Place a bench perpendicularly and directly between two cable stacks. Place the handles on the low pulleys. Grab each handle and assume a position flat on your back on the bench. Perform the movement by starting with the arms extended and the hands directly over the chest. Lower using the same form you'd use in a traditional dumbbell bench press until the elbow joint is approximately 75 degrees. Press up while simultaneously pulling the hands together until the handles touch at the top.

Do not, I repeat, do not perform these exercises during the same workout! If you do, you won't be able to function the next day. Here's a sample workout plan. All assistance exercises can be substituted for other exercises that hit the same muscle group if you want. Program Duration: 4-6 weeks.

Want to make this program even more effective? Then I highly recommend my 100 Reps to Bigger Muscles chest program on your days off to speed recovery. If you aren't familiar with the program, execute 4 sets of 25 repetitions (or 10 sets of 10 repetitions) evenly spaced throughout the day for the target muscle group. This will dramatically improve recovery and reduce soreness.

If developing a massive chest is your goal, this program will get you there fast! I'm off to shave my legs now. 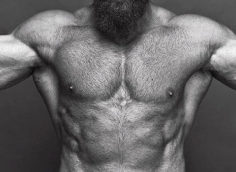 Are you strong? Like, really strong in a real-world kinda way? Take this test and find out.
Deadlift, Powerlifting & Strength, Tips, Training
Charley Gould May 23 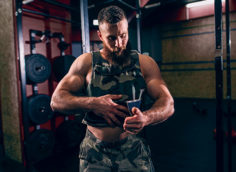 Science says this will help you lose a pound of fat per week without changing your diet. Details here.
Training
Chris Shugart June 28

The most radical gains of your life won't come by accident. For that, you need a gut full of ambition and a borderline crazy plan.
BCAA, Creatine, Plazma, Protein, Training
Todd Bumgardner & Mike Roussell, PhD February 12