Just so we’re clear, either people want to do 5/3/1 or they don’t. I really want to help people, but if they won’t take my advice there’s nothing I can do. That’s fine by me. I don’t fight the battles. I just don’t fucking care.

Look, arguing about strength training theory is stupid. And the reason I came up with 5/3/1 was that I wanted a program that eliminated stupid thoughts from my head and just let me go into the weight room and get shit done.

I’ve been training for 20 years, and this is what I’ve learned. 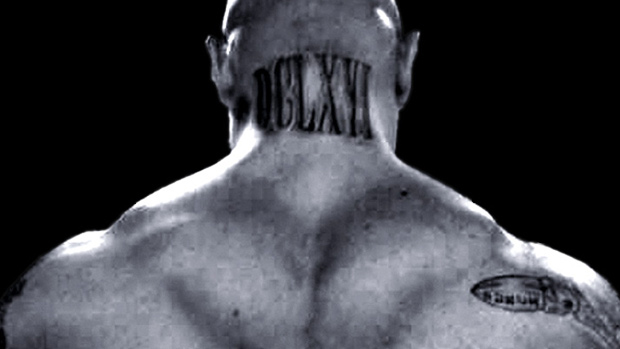 My best powerlifting accomplishment in the 275-pound weight class was a 1,000-pound squat, 675-pound bench press, 700-pound deadlift, and a 2,375 total. No, I wasn’t strong at all! Sure, I could waddle up to the monolith and squat, but I couldn’t do anything else. Really, all I could do was squat, bench, and deadlift.

Today I have different aspirations. I want to be able to do a bunch of different activities and still kick ass in the weight room. I want to be as mobile, flexible, strong, and in as good a condition as I possibly can. That’s how I came up with 5/3/1.

The core philosophy behind 5/3/1 revolves around the basic tenets of strength training that have stood the test of time.

The bench press, parallel squat, deadlift, and standing press have been the staples of any strong man’s repertoire. Those who ignore these lifts are generally the people who suck at them. If you get good at those, you’ll get good at other stuff, as they have such a huge carryover.

While it may seem counterintuitive to take weight off the bar when the goal is to add weight to it, starting lighter allows you more room to progress forward. This is a very hard pill to swallow for most lifters. They want to start heavy and they want to start now.

This is nothing more than ego, and nothing will destroy a lifter faster, or for longer, than ego.

This ties in with starting light, and it keeps lifters who want to get big and strong yesterday from sabotaging their own progress.

People want a program that will add 40 pounds to their bench in eight weeks. When I ask how much their bench went up in the last year, they hang their heads in shame.

5/3/1 is set up to allow you to break a variety of repetition records throughout the year. Notice that it’s “rep records” and not “one-rep max.” Most people live and die by their one-rep max. To me, this is foolish and short-sighted. 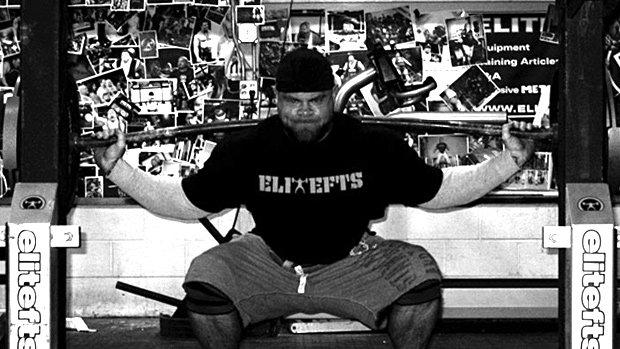 In 5/3/1, you’re expected to train three or four days a week. Each workout is centered around one core lift – the parallel squat, bench press, deadlift, and standing shoulder press.

Each training cycle lasts four weeks, with these set-rep goals for each major lift:

Then you start the next cycle, using heavier weights on the core lifts. And that’s where a seemingly simple system starts getting a little more complicated.

You aren’t just picking a weight to lift five times or three times or one time per set. You’re using a specific percentage of your one-rep max. And not your full 1RM. The calculations are based on 90% of it.

So if your 1RM in the bench press is 315 pounds, you use 285 (90%) as the base number for your training-weight calculations. Here’s how it works:

When you see 5+, 3+, or 1+, that means you do the max reps you can manage with that weight, with the goal of setting a rep record in each workout.

Let’s walk through the Week 1 workout for bench press. Using the example above, if your 1RM is 315, you calculate all your percentages from 90% of that max or 285 pounds.

These specific instructions for 1RM percentages and monthly progression are what set 5/3/1 apart from less useful systems. When I see a program that says three sets of eight reps? That’s the stupidest fucking thing ever.

If it doesn’t have a specific percentage based on a specific max, it’s useless. That’s the hallmark of someone who doesn’t understand basic programming.

One Goal Per Workout

With 5/3/1, you accomplish a goal every workout. Some programs have no progression from one day to the other.

Another unique feature is that final balls-out set in each workout. You don’t have to go beyond the prescribed reps if you don’t feel like it, but there are real benefits to doing so.

I’ve always thought of doing the prescribed reps as simply testing your strength. Anything over and above that builds strength, muscle, and character.

Yes, that last set is the one that puts hair on your chest, but the system doesn’t work without the sets that precede it. I tried cutting those out but I got smaller and weaker. There might be only one really hard set, but the other sets are still quality work. 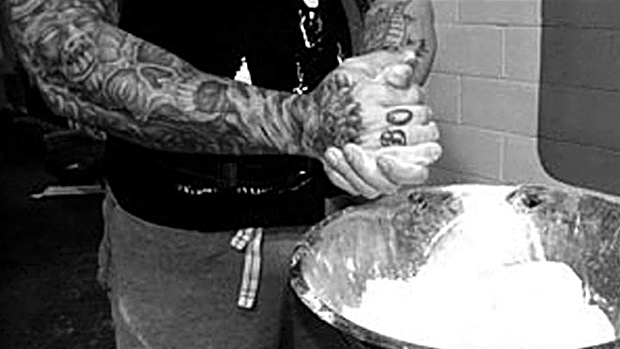 Along with the bench press, squat, shoulder press, and deadlift, 5/3/1 includes assistance exercises to build muscle, prevent injury, and create a balanced physique. My favorites are strength-training staples like chin-ups, dips, lunges, and back extensions.

But don’t go ape-shit with supplemental exercises. They should complement the training, not detract from it. You must have a very strong reason for doing an exercise. If you don’t, scrap it and move on.

There are a number of ways to do assistance work: Boring But Big (my version of a hypertrophy program), The Triumvirate (shown below), and my favorite, I’m Not Doing Jack Shit, named for those times when you only have time to hit the PR in your key lift and leave.

People laugh and call me lazy, while they twit around in their three-hour workout making zero progress. Sometimes, instead of what you do in the weight room, it’s what you don’t do that will lead to success. 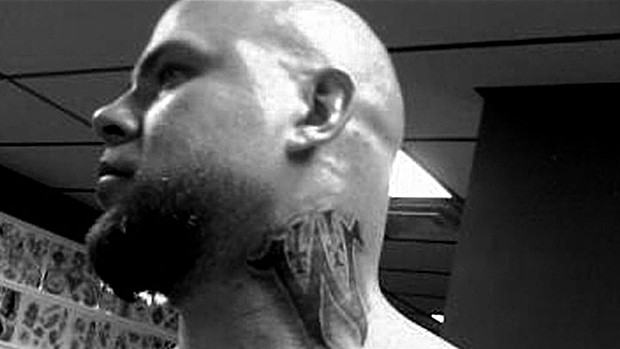 I’ve received a lot of positive feedback from lifters who used 5/3/1 to overcome plateaus in strength and size development. And it’s not just from advanced guys. I received a thank-you from a guy who went from 135 for 1 rep on the bench to 135 for 17.

The program has also received criticism from lifters on two fronts: that lifters are told to start too light and build too slow.

“Start too light” refers to my insistence that the prescribed loads are calculated off of 90% of the lifter’s 1RM. If your 1RM in the bench is 315, why calculate loads off a 1RM of 285?

My response? People who freak out about the 90% thing are usually weak in the first place. You don’t need to operate at your max to increase your max. Why people get so bent out of shape about taking two steps back if it means they’ll be taking 10 steps forward is beyond me.

Then there’s the “disconnected from reality” problem. Few lifters are willing to acknowledge their true 1RM.

At one time, I did a seminar every week. Every time, without fail, when I asked someone what their one-rep max was, I’d get this: “Well, about three years ago I hit 365 for a triple, but that was when I was training heavier…” Most guys just don’t have a fucking clue.

By using the 90%, I account for this bullshit. By using weights they can actually handle, guys are building muscle, avoiding burnout, and most importantly, making progress every workout.

None of this is exactly revolutionary. I learned this in my freshman year. I’ve always made my best gains when I left just a bit in the tank.

The pursuit of strength is not a six-month or one-year pursuit. It’s a 30-year pursuit for me. You’ve got to be smart about it. But everyone wants everything right now. 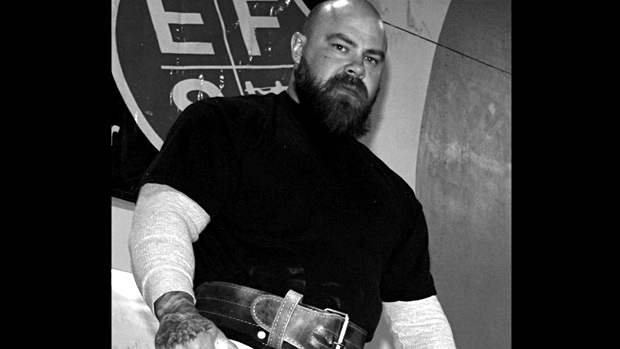 This applies to any program published on this site, but it especially matters for 5/3/1. You must do the program the way it’s written.

People ask the craziest shit. “Can I combine 5/3/1 with Westside for Skinny Bastards?” Why not just do one or the other and make progress?

These same guys then bitch three months later on some message board that the program didn’t work. That’s like complaining that your girl got pregnant despite you using a Trojan condom, except you forget to mention you were wearing the condom on your fingers.

2. Take it easy with the assistance work.

Some people look for the magic combination of assistance exercises, and completely under-rate the key lift. I call that majoring in the minors. Assistance work is just that – assistance. Do one or two exercises for five sets of 10, or maybe do a few more exercises for fewer sets. It’s assistance. It doesn’t fucking matter.

I sometimes just give people a rep number and let them make it up on their own. Say, “push movement: 60 reps,” or “pull: 100 reps.” It’s all just working the muscle.

3. Start with the right weights.

This bears repeating. I don’t know how many times people have blown away their PRs because they learn to train with some restraint and actually use weights that they can handle with good form.

I tell guys that the longer your stride, the quicker you’ll tear a hamstring. But the problem is, people live for today’s workout. No one seems to have the vision anymore to look beyond just what they’re doing today.

I plan my training for a year. I know exactly what I want to do, and what I want to accomplish 12 months in advance. And I know what 5 or 10 pounds a month adds up to over the course of a year.

The game of lifting isn’t an eight-week pursuit. It doesn’t last as long as your latest program does. It’s a lifetime pursuit.

To look at 5/3/1 on your computer screen, it appears simple enough. That’s exactly what I’m after. Getting big and strong just doesn’t have to be complicated. Here are the keys to making it work:

You might like your own version of it better than the original, but you can’t attribute your success or failure to the guy who wrote the program unless you’re actually doing the program as he wrote it.

The Triumvirate uses three exercises per workout, one of which is a core lift. Before each workout, do a warm-up that includes mobility, flexibility, something to raise your core temperature and heart rate (like rope jumping), and foam rolling.

I recommend adding two or three conditioning sessions per week, using hill sprints, Prowler pushes, or whatever else works for you.

Remember that you’re calculating percentages based on 90% of your current 1RM in each lift, not from the actual 1RM.