Admit it – you're not satisfied with the size of your arms.

Despite the rainbow of medium-sized UnderArmour shirts that you wear to the mall in a valiant effort to impress the high school girls, you're not fooling anyone, least of all yourself.

You're not alone. Poll a hundred meatheads and it's unlikely you'll find a single lifter who's satisfied with his arm development. The fact is, hundreds of thousands of lifters grew up admiring Arnold's guns and aspired to one day achieve his level of jaw-dropping arm-growth – to no avail. Sadly, most lifters just don't ever obtain impressive arm development.

Where do these lifters go wrong? It's very simple. They focused on single joint arm exercises, and as much as we hate to be the bearer of bad news – those 17 sets of isolation biceps curls that you performed every Monday, Wednesday, and Whateverthefuckday for the past five years didn't do you any favors. What's more, as you'll soon learn, from an arm development standpoint, they're quite possibly the last things you need right now.

There's one rule of Big-Arms Training: You must focus on getting stronger at compound exercises. And when we say compound movements, we mean exactly that; exercises that involve multiple joints, allow you to use the most external load, and give you the most bang for-your-gettin-gunny-buck.

On the right you'll see a highly complex model that depicts the Pyramid of Big-Arms Development. Okay, maybe it's not very complex but we'll break it down for you nonetheless.

Why in the world are squats and deadlifts important for arm development? There are two primary reasons.

You rarely see an individual with 18-inch arms and skinny twig legs. Sure, like male Justin Bieber fans, it can happen – but for natural lifters, arm growth is usually accompanied by total body muscle growth. The adage that one needs to gain 20 lbs. to gain an inch on the arms seems to have merit.

For lifters who use anabolic assistance, obtaining huge arms without concomitant strong legs is somewhat easier to achieve, but the majority of natural lifters would be well served by concentrating on squats and deads until sufficient levels of strength are reached.

Strong squatters and deadlifters possess excellent erector spinae strength. The erectors keep the back upright during barbell curls, easy bar curls, reverse curls, and dumbbell curls, to name a few. A weak back, however, will limit the poundage one can use when curling.

Side Note: It's also the reason many ego-driven trainees look like their humping an elephant while doing arm curls – their back is so weak that they have no option other than to sway back and forth, using momentum to get the weight moving.

Strong squatters and deadlifters also possess superior leg and hip strength. Powerlifters will tell you that leg drive is critical for increased bench press and close grip bench press strength. Yes, if you bench correctly, the legs produce much assistance – weak legs will limit the poundage one can use when benching. Notice the trend?

A good long term-goal is a 405 lbs. parallel squat and a 495 lbs. conventional deadlift. If you're already there, congratulations! We don't need to tell you to keep working the legs because when you're strong at these lifts, you "get it." But for those who aren't there, you'd be well served to start ratcheting up your squatting and pulling poundages before embarking on yet another "arm specialization" routine.

Finding a lifter with huge arms who can't bench press 225 or perform at least ten bodyweight chin ups (without cheating) is like finding a Victoria Secret model who wants to have wild passionate sex with you. It won't happen!

If you want big arms, here are the exercises that will serve you best:

A good long-term goal here would be a 315 lbs. bench press and a 100 lbs. weighted chin up. Pat yourself on the back if you can already perform these feats – now work on repping out with them!

Is It Okay to Isolate?

Be honest, you thought we were going to say no, right?

Some isolation work is just fine; just understand that isolation work is the icing on the cake. When programmed in concert with heavy, compound lower body and upper body work, it will add extra size to the arm musculature.

Now we'll provide a convincing rationale for the inclusion of isolation work for those seeking maximum arm development.

For example, in the start position of a chin-up (hanging from the bar with arms straight), the biceps are shortened at the shoulder joint while lengthened at the elbow. Then, during dynamic movement, these aspects reverse so that the biceps shorten at the elbow while lengthening at the shoulder. Thus, length/tension is compromised, diminishing the force output of the muscle.

Moreover, as will be discussed, the muscle architecture of the biceps and triceps necessitate a multi-angled approach to fully activate all the motor units. Only by using single-joint exercises can this be accomplished.

Studies show that the long head of the biceps are maximally active in exercises such as incline curls and drag curls, where the humerus is extended behind the body (Sakurai, et al, 1998; Basmajian and Latif, 1957).

This is attributed to the long head being placed in a greater stretch position compared to the short head. It then follows that the long head will become actively insufficient as the shoulder is brought into flexion (i.e. out in front of the body), thus exercises such as the preacher curl will force the short head to assume a greater burden of work.

The long head also becomes actively insufficient when abducted to 90 degrees (Habermeyer, et al, 1987), thus exercises such as cross cable curls on a high pulley will target the short head to a greater extent.

Considering that the biceps are powerful radio-ulnar supinators, performing exercises such as hammer curls will render the biceps actively insufficient, thereby increasing the work of the brachialis and brachioradialis muscles (Enoka, 2002).

What's more, evidence shows that aspects of the biceps are "partitioned" with both the long and short heads comprised of individual architectural compartments that are innervated by private branches of the primary nerves (Segal, et al, 1991).

Furthermore, the short head appears to be more active in the latter part of an arm curl (i.e. greater elbow flexion), while the long head is more active in the early phase (Brown, et al, 1993). These factors lend credence to the need for including a variety of biceps exercises throughout a full range of motion to maximize the hypertrophic response.

Only by performing exercises such as overhead triceps extensions will you be able to directly target the long head, maximizing its hypertrophic response.

Given that the lateral and medial heads don't cross the shoulder joint, they become increasingly active in exercises such as pressdowns and dips where the shoulder joint is extended, which make the long head actively insufficient.

Three Different Routines With a Focus on Maximum Arm Development

Despite what some of the forum bullies say, proclaiming that you want to have big, freaky arms isn't a silly or immature thing to admit to.

Heck, we'd go so far as to say that those who criticize gun-worshippers the loudest are likely the ones most frustrated at their own lack of arm-training success. But just because big guns is the goal doesn't mean your programming should consist of 26 different variations of elbow flexion and extension.

Remember, arm growth doesn't occur in a vacuum, which is a polite way of saying: 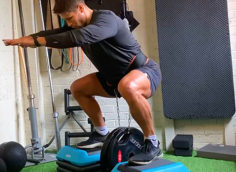 Can't squat with a barbell on your back? Build your legs like this.
Training
Gareth Sapstead November 26

Add this tweak to your favorite stretch and really loosen up those tight lats.
Mobility, Tips, Training
Drew Murphy February 16

Stop it. You're just asking for trouble. Here's why.
Tips, Training
Clay Hyght, DC May 17