CrossFit has its fans and its detractors, but the one thing everyone seemingly agrees on is that the women who do it look pretty darn good.

As powerful a lure as looking pretty darn good might be to a lot of non-CrossFit women, the idea of joining a "box" probably freaks many of them out. It could be that you were never one to join sororities in college and the notion of all that rah-rah stuff and allegedly friendly competition makes you get frown lines around your mouth.

Maybe CrossFit comes off just a little bit too much like a cult and you're in no mood to give away all your worldly possessions and swear allegiance to its founder. Others might cringe at the idea of doing all those bunion-pounding sprints. Or, it could simply be that you don't know how to do some of those Olympic lifts.

If it's the last option, you're not alone. There are thousands of female (and male) bodybuilders and fitness enthusiasts who can't do a proper snatch, clean and jerk, or muscle-up on gymnastic rings. Either they didn't learn how do to them in gym class, no one in a commercial gym taught them, they didn't bother to seek out a qualified coach, or they were just plain klutzy and were worried about impaling innocent bystanders.

Regardless of your reasons for not learning these lifts or not joining CrossFit, there's a way to achieve a CrossFit figure without learning Olympic lifts, joining a box, or doing any of the sometimes bizarrely concocted CrossFit workouts of the day (WODs), and you can do it in as little as 12-20 minutes a few times a week.

A complex is simply a series of movements performed with a barbell, dumbbell(s), or kettlebell(s) where you finish each rep of one movement before quickly moving onto the next movement. Typically, you don't take your hands off the weight until the complex is finished.

On the other end of the difficulty spectrum are complexes where you do several movements for a prescribed number of reps, rest briefly, and then repeat the movements, this time doing one less rep on each exercise and continuing on in this one-less-rep-with-each-set protocol until you're lying on the floor making pitiful little wheezing sounds.

For instance, a favorite complex of trainer Alwyn Cosgrove involves doing 6 reps each of 8 different movements that includes deadlifts, bent-over rows, front squats, overhead presses, and back squats, among others.

You'd do 6 of each, rest briefly, and then repeat the complex, this time doing 5 reps of each. Then you'd rest again and do 4 reps of each. You'd continue doing circuits in this manner until you were down to 1 rep per movement.

Yes, You're Going to Lift 7,500 Pounds in Just a Few Minutes

If you were to complete it using only the standard 45-pound Olympic bar, you'd have lifted just over 7,500 pounds in just a few short minutes, which is a little heavier than the combined weight of two-and-a-half Toyota Priuses! Understandably, this kind of workload melts body fat, increases conditioning, builds muscle, and possibly increases your fuel efficiency, and it does it all fast.

The ugly part of the complex is that it's hard. It takes concentration and drive. After you're done, you'll probably be standing in a puddle of sweat and strangers will think you have a glandular problem. If you're not at least a little bit nervous before doing them, you're not using enough weight or you're not doing enough circuits.

The only rule in devising complexes is that the exercises need to follow some sort of logical exercise order in regards to the bar. You wouldn't start with bent-over rows and then do back squats next. 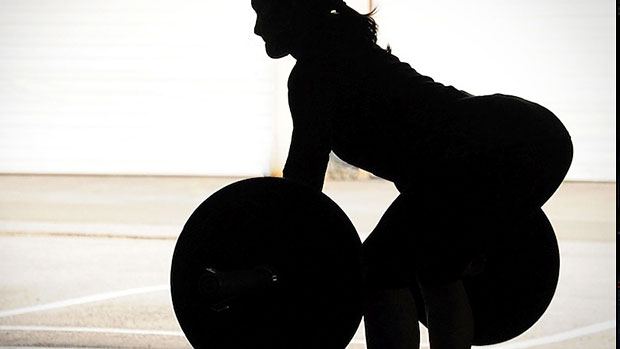 The major drawback of any complex is that you're limited by the heaviest weight you can use on the weakest movement in the complex. Men, obviously, face this problem, too, but it's more of an issue with women.

Men and women are pretty much equal pound-for-pound when it comes to lower body strength, but it's not true of upper body strength where men are much stronger. This poses a problem with movements like overhead presses, which are a staple of many complexes.

For instance, let's say you're using an 85-pound barbell to do complexes. That weight might be fine for both men and women when doing multiple reps of deadlifts, but it's likely going to be way too heavy for women to press overhead even once, let alone multiple times. Most men, however, would be able to pull it off.

Save the Children With Push Presses

Rather than doing conventional overhead presses during complexes, women might want to incorporate push presses where you dip slightly with your knees and forcefully redirect the energy from your body to the barbell. This will allow most women to use much more weight in the overhead press than they could otherwise.

Simply grasp the bar with a slightly-wider-than-shoulder grip, point your elbows out in front of you, tighten the core, and quickly and deliberately bend the knees and push them out like you were doing a squat before explosively straightening the legs and redirecting the force upwards to propel the bar overhead.

It may sound technical, but it really isn't. If all the conventional queues fail and you're still having problems, simply assume the proper position, forget everything you've heard, and pretend you're trapped in a fiery pit and you have to toss a small child to the safety of a firefighter's outreached hands.

While Cosgrove's original complex included power cleans, I replaced them with another movement. However, the complex needs to have some way for you to transition between the lower body movements to upper body movements.

Most people who do complexes simply clean the bar up to shoulder level while including the movement itself in the complex, but if you don't have any experience with power cleans or hang cleans and don't feel ready to learn them just yet, we can easily work around them.

The trick is to simply break one of the rules of the complex and take the hands off the bar before finishing. When setting up to do the complex, set the pins or supports of the squat rack or power cage a bit lower than waist level before placing the bar on them.

Then quickly reposition yourself so that you can front-squat the bar up, thereby taking a detour around the power clean. Proceed with the front squats, push presses, back squats, and good mornings. When you finish the complex, squat the bar back down into the supports or pins so it'll be ready for the next circuit. Easy.

You can do a set number of reps of each exercise (anywhere from 6 to 10 of each) in this complex and simply repeat the entire circuit as many times as you feel capable of doing.

Or, you could follow the same sort of descending rep scheme explained in the Cosgrove Complex above – 6 reps or each, rest, 5 reps of each, rest, and so on until you finish with 1 rep of each.

Do this complex once as a finisher, or do it multiple times for a fat-busting, muscle-shaping workout. 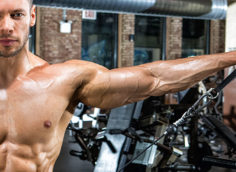