Some have merit; many do not. As it has and always will be a results-driven endeavor, the techniques that work will stand the test of time while the others will simply fade away into training obscurity.

Partials performed in the strongest range for an extended period is an example of an "antiquated" method. Intended as a means to increase the amount of work performed in a given unit of time, it would be superior if we only considered half of the work equation.

The problem, of course, is that work is equal to force times distance. One lifter might bench 405 pounds for 3 or 4 inches, but another presses 315 pounds for 18 to 20 inches – who performs more work? You just have to do the math and with that, it's on to the next one.

The superset is a classic method that's been used successfully for decades. In this article, I'll present four superset versions (agonist, antagonist, pre-exhaustion, and post-exhaustion) in one routine. This system works well for both hypertrophy and body composition changes – in other words, to get big and lean at the same time!

Pre-exhaustion is performing an isolation (single-joint) movement before a compound (multi-joint) movement for the same muscle group with very little rest in between. An example is performing flyes just before the bench press to pre-exhaust the pectorals. The triceps and deltoids pitch in during the bench press portion of the pairing, allowing you to completely fatigue the pecs.

Post-exhaustion is the reverse order (performing a compound movement just before an isolation movement for the same muscle group). The advantage of this system over pre-exhaustion is that greater workloads can be achieved, but both methods are effective for hypertrophy.

A staggered pairing is sequencing two muscle groups from different parts of the body in a superset fashion, such as alternating between squats and chin-ups. This approach improves recovery (as you fatigue the lower body, the upper body recovers, and vice versa) and is effective for body composition changes.

The following routine doesn't use staggered pairings per se, however, by sequencing superset pairs in a staggered fashion (i.e., three sets of a lower body pair followed by three sets of an upper body pair, and so on), similar results can be achieved.

This allows us to alternate between agonist (same) and antagonistic (opposite) body parts/movements (for strength and hypertrophy) as well as between upper and lower body exercises (for body composition) to experience the best of all worlds! 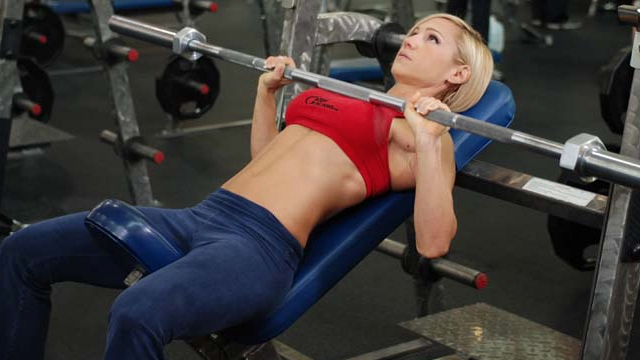 Sometimes small things can make a big difference. The 10 seconds between exercises of a superset gives you just enough time to get to the next station and go. This short rest interval will also allow you to recover a bit for better performance on the second exercise.

Unfortunately, this form of training is not always practical in a busy gym. To minimize frustration and avoid run-ins with the Moron Squad, try to plan your workouts around non-peak hours.

The frequency is 4 days a week. For those who prefer their weekends free, follow this schedule:

If you have more time to train on the weekend, then follow this schedule:

Novices can alter the routine and use the same movements on days 3 and 4 as you do on days 1 and 2, respectively – simply reverse the order of exercises within each superset pairing.

For advanced trainees, however, greater diversity and more recovery time is necessary. Therefore, many of the exercises will differ somewhat on Days 3 and 4, particularly the multi-joint movements. Performing a pull-up as the first exercise of a superset pair is fine, but it's not quite as "exciting" as the second exercise, especially if you're over 200 pounds!

This type of training will often require load reductions on subsequent sets to maintain the rep targets. Slow-twitch individuals may get away with the same loads throughout, but most fast-twitch trainees won't. A rep range is given as a buffer to accommodate fatigue and gauge how to proceed on the following set.

For instance, if 10-12 reps are prescribed and you perform 12 reps on the first set, use the same weight for the next set. If you drop to 10 reps, lower the weight by 5-10% for the third set. If on the second set you perform 11 reps or happen to get 12 again (which usually means that you didn't use a maximum load on the first set), then stick with the same weight on the final set.

However, if you only muster 10 reps on your first set, you must lower the weight (again by 5-10%) on the next set – it's highly unlikely that you'll achieve the prescribed number of reps otherwise. With experience (or a decent trainer by your side), you'll know how to manipulate the loads appropriately.

A Super Method for Super Results!

Unlike extended partial training, supersets do allow more work in a given period of time. especially if the exercises are performed through a full range of motion.

Don't mess with success – if something works, stick with it. You'll get big and lean with a superset routine, and trust me, that never gets old!