It's like watching a train wreck over and over and not being able to prevent it. A lifter blows his shoulder and is forced to take three months off to recover. When he finally gets back in the weight room, his upper body is noticeably smaller. No surprise there.

However, what is a surprise is that his formally big wheels now look like walking sticks. Back up a second, gimpy. Did your legs suddenly stop working when your therapist locked your shoulder in a brace? Oh that's right – they didn't.

If you've sustained a real injury, you should be seeing a qualified medical professional, and a good one at that (do your homework!). And if this professional asks for a complete halt in activity, then listen to him. But that happens less often than you might think.

Instead, this could be an awesome opportunity to bring up a non-related muscle group or correct an imbalance, something I do with banged-up athletes all the time.

Trust me, there's no need to resort to lame machine work or play with rubber tubes when there are compound movements that you can do to keep your core strong and help you sustain strength.

So if you're ready to put the Kleenex down for a second, here are some alternative strategies to put in the mix when you're hurt.

Leg Injury? Bring Up the Shoulders and Trunk

There are endless opportunities to build greater upper body size and strength when recovering from a lower body injury. However, coming up with challenging movements when weight bearing lifts are out of the question can be a tall order. And the last thing you want to do is resort to using all machines and strict isolation exercises.

The first is the seated dumbbell clean and press:

The second is the seated dumbbell snatch:

Although the two lifts are similar, they place a different emphasis on the shoulder girdle and variation between the two is needed when your exercise choice is already limited.

The focus on the snatch should be shrugging and flinging your trunk up to create enough momentum for the dumbbells to travel above your head.

Say you pull one of your adductors (groin muscles) or a quad muscle. You're going to have a pretty hard time hitting parallel in a squat without experiencing a great deal of pain and potentially exacerbating the injury.

Instead of resorting to half-squats – which I don't have the constitution to tear into right now – substitute the deadlift instead. The starting position of the deadlift is essentially a half-squat position anyway, and it places the hips in a less acute angle than in a squat.

As a result, there's much less emphasis on the quads and adductors and more on the hip extensors, allowing it to be a temporary substitution. Just be sure to have your rehab specialist clear you for this first.

Notice the difference in hip angle in these two positions: 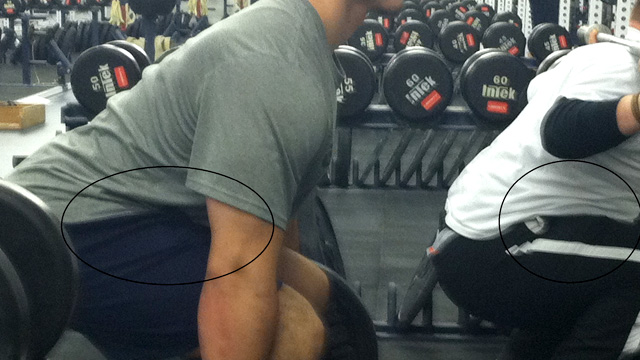 If extra deadlifts are used while recovering from the injury in question, great amounts of power production, along with core strength, can be preserved.

The bar can also be placed on blocks to lessen the quad involvement even more and raise the hips higher, emphasizing the hip extensors and minimizing the involvement of the injured musculature.

Too many well-meaning lifters resort to isolation-machine leg exercises while recovering from an upper-body injury.

Sure, there are times when a shoulder or pec injury is so severe that holding a barbell on the back or a dumbbell in the hand is out of the question. As a result, a lifter can lose considerable muscle and strength in his lower body because he assumes that leg extensions and hamstring curls are the only friends he has left.

That's where he's wrong. The belt squat is a great tool for this situation. No hands needed.

The belt squat is challenging in ways that conventional squats are not. I've seen athletes who can back squat well over 500 pounds struggle to hit adequate depth with just two plates hanging from the belt.

The reason for the discrepancy is that a great amount of stabilization, balance, and strength is needed to squat down like this, and some of us may have more experience with a big weight swinging in between the legs than others.

Balance may be the limiting factor in increasing weight but progress will come with time. Greater levels of stabilization and core strength inevitably develop from belt squats that will pay dividends when you recover from your injury and start training with your main lifts again.

Just walking with a sled can help bring up weak points in your lower body. Mix in some loaded carries (holding the weight with your good arm or in a bear hug) and you have no excuse for not building greater levels of lower body strength and endurance while recovering from an upper body injury.

Walking lunges are great for keeping leg strength up to par. When an upper body injury prevents holding any significant weight in the hands or on the shoulders, you can still load a sled and do repeat walking lunges with it.

No sled? No problem. Grab a band/rope, a towel or foam mat (as shown), and some plates.

There's only so much weight you can hold in one hand if the other is useless. Pulling a sled (or makeshift sled) allows you to load up and keep those wheels you've spent so long building up.

One of the biggest challenges a lifter faces when returning from injury is a weakened core. Here's the scenario: Upon hitting the squat, deadlift, and clean again, the lifter finds he has enough strength in his legs to get the weight moving, but lacks the midsection strength to stabilize it. The result is a failed lift and a frustrated lifter.

Usually this guy will resort to isolation machine work to keep his legs strong but this does nothing to address the stability issue, resulting in more failed lifts when he tries to squat again.

Putting a weight over your head while sitting tall on a bench is a great way to keep the core strong after a lower body injury. Dumbbell clean and presses and snatches are very effective examples.

Other types of stabilization exercises should also be taken into account, which is where seated Pallof presses and seated chops can help keep up with anti-rotational stability.

Fallouts are another great way to train your anterior core without putting undue stress on your lower body injury. Rollouts and even planks can put pressure on a bad knee or hip that a properly performed fallout does not.

There's no need for blast straps or anything fancy like that. Go to a hardware store and get some rope if your gym doesn't have anything you can use.

I've found that these are safe for most lower body injuries as long as you limit how far you go down, as I do in the video. Even with this limited range you're still going to get great results. You can even lift the bad leg to protect it and increase the difficulty.

Injuries are almost inevitable if you spend enough time pushing yourself to get better in the lifting game. While every effort should be taken to eliminate the chance of injury, it still happens.

When these obstacles come, do what a winner does and view them as an opportunity to focus and improve on non-injured areas instead of viewing it as a handicap.

Never stop improving – that's what real progress is all about!

Editor's note: Obviously, the movements described in this article could aggravate some injuries, depending on their seriousness. Use your smarts and proceed carefully and deliberately until you determine if these exercises are suited to your condition.

The KB swing is one of the best exercises you can do... but not if you make this form mistake. Here's a great trick for fixing it.
Exercise Coaching, Tips
Tony Gentilcore March 6

Get better results with the RDL and good morning by lifting the front of your feet on a plate. Here's why and how to do it.
Tips, Training
Christian Thibaudeau January 20

The leg press can be a muscle-building staple if you know how to do it right. Check out these tips and variations.
Tips, Training
Christian Thibaudeau March 4