We’ve all heard the argument that women should train the same way as men. Well, it isn’t true.

Sure, if women want to make radical changes to their physiques, they should work to get strong and build muscle and stay away from the step classes and lengthy aerobic exercise… just like men. However, when it comes down to programming and actual exercise there’s a list of things females need to take into consideration to get stronger, improve their physiques, and stay injury free. 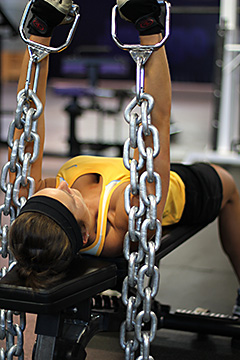 When it comes to training physique, for the stage or otherwise, a woman has slightly different needs than a man. Men of course want to look wide, have a big chest, and big cobra traps. If you suggested that look to most women, they’d probably run away and never touch a weight again. They generally want good shoulders, arms, calves, abs, glutes, and legs.

Men generally don’t need to perform a lot of isolation work to get a great physique. If you concentrate on getting strong by using the big lifts, men will generally get good results, but many women find it hard to press and pull heavy, and they often become arm dominant in those lifts.

That’s why I recommend more isolation work for women, especially for the upper body. For example, I’ll include two arm days per week. Because women have smaller muscles, they can isolate them more often and not worry about longer recovery periods.

Here are some general points regarding the areas of interest to most women:

Calves  Women should train calves 4 days a week in both vertical planes. Having a great set of calves on stage or in a dress looks great and will help make larger quads and hamstrings look more proportionate.

Shoulders  The most noticeable thing on a woman’s chest shouldn’t be a big pair of pectoral muscles. I don’t think I’m being sexist when I suggest that 90% of women wouldn’t be too happy if you told them they have a great set of pecs.

Instead, women should perform heavy pressing movements with mostly dumbbells (more shoulder stability and activation) in addition to isolating the shoulders more regularly. Men usually isolate their chests with cable crossover variations, the pec deck machine, and pressing drop sets, whereas women should skip all that and instead do more shoulder isolation exercises or higher-rep bodyweight exercises.

Abs  Guys can build great abs from just heavy squats and deadlifts. Women can get a good base from these exercises but they still need isolation work in this area. Add in a heavy abs day and volume day at the end of your upper body sessions. These can be done in tri-sets or supersets with other muscle groups.

Glutes  If you’re squatting or training legs 3-4 times a week, you’ll automatically build a great set of glutes, but it’s a good idea to add some bodyweight glute bridges in with your warm-up sets and really emphasize pushing the floor apart with the outside of the feet when squatting to activate the glutes better. 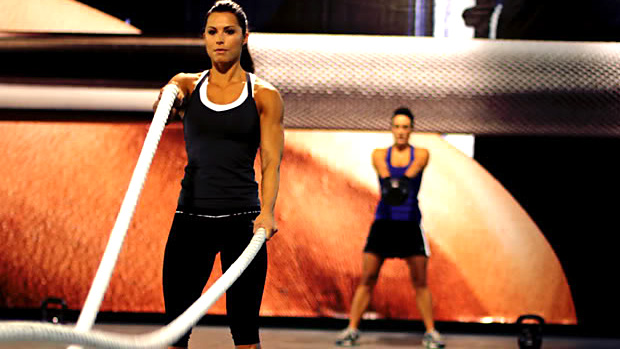 Most men run either three full-body days or a two upper/two lower split, whereas bodybuilders will tend to train one muscle group a week. Women can handle more frequency and recover better so I like to start off every training session with a lower body exercise.

Different goals will determine different types of programs, of course, but for women who just want to look good, build strength, and stay healthy, something like the following would work great:

A 4 or 5 day weekly split could look something like this:

The key points in every training session are to train lower body and finish off with some type of isolation circuit or exercise. The quads, hamstrings, and glutes get trained frequently but still get trained at different intensities and movement patterns throughout the week.

Compared to men, females don’t usually break the 95%+ mark of their predicted 1RM when testing their max, unless they’re very new to training. For example, a female might get an easy 4-5 reps at 80 kilograms and then miss 1 rep at 85 kilos when their predicted 1 rep max would be 90 kilos. Females tend to either get the rep comfortably or just fail at it. They just can’t seem to grind out a rep like men do. However, this “shortcoming” allows females to train more frequently at high intensities and not worry about overtraining or frying out the CNS.

Females also benefit from more frequent exposure to the squat, bench, and deadlift than men. A female could squat 3-4 weeks in a row at 90%+, whereas a typical man would probably peak after 2-3 weeks and be fried afterwards.

Women need a heavy weight on their backs for psychological reasons, too. Men are more inclined to remain unfazed by a heavy bar on their back, whereas women have often mentally defeated themselves during a lift due to the fact they’re sometimes naÃ¯ve to the feel of a heavy bar that’s at or close to a 1RM.

As such, I like to use a conjugate-style system for my raw female lifters combined with volume on dynamic days, along with accessory work. As they become more experienced, not having lifted heavy for a competition or for a personal best becomes less of an issue.

Women don’t often possess the same chest musculature as guys and have to rely more on their triceps, shoulders, and back. That’s why the key to a good bench press for the female lifter is strong triceps and good mobility.

Developing a big arch via mobility work (back, ankles, hip flexors, and shoulders) will decrease the work the chest has to do and put more load on the triceps and shoulders. The downside to this is females tend to be more open to shoulder injuries. Prehab work, good accessory work, and a decent shoulder warm-up are key here.

I also use a slightly closer grip with my female lifters to isolate the triceps more. Elbow position along with wrist position and general set-up is very important.

Out of the three big lifts, the deadlift is the closest between the sexes in terms of how I program the lift. That being said, I lean towards the sumo style deadlift over the conventional style for women, especially the smaller ones.

Women are generally shorter than men and performing the sumo deadlift allows them to use this to their advantage as they can create an even shorter distance for the bar to travel compared to using a conventional style. The sumo style is also a more balanced pull in terms of what muscles groups are being used at any one time.

Women generally don’t seem to be strong in any one particular area and tend to be strong all over rather than have one muscle group that stands out. The conventional deadlift has more hamstring and lower back emphasis and as such requires a lifter to be stronger in those areas.

Due to biomechanical factors, women are more prone to injuries in certain areas. Women are far more likely to suffer an ACL injury than men. Part of the problem is that women often have excessive anterior pelvic tilt (see pic) and valgus knees angle which basically means their knees angle away from the body. 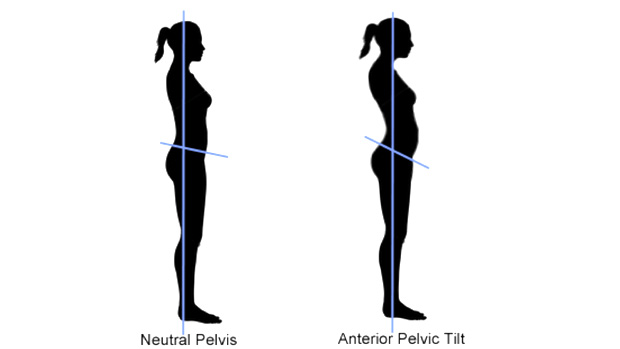 This increases their chances of osteoarthritis in the knee (wear and tear of the joint) and increases the risk of other knee issues such as ACL injuries and knee pain.

Women also suffer from patella tracking problems due to tightness in the hips and slow or inactive glutes and hamstrings. A lot of women walk around in heels for long periods. This puts more emphasis on their quads and doesn’t allow the glutes and hamstrings to work as much as they should while doing simple activities such as walking up and down the stairs, standing up, and running.

Consequently, women should squat in flat shoes more often and perform more hip mobility work in their warm-ups, in addition to also adding in some extra glute, hamstring, and lateral movements. This will help avoid the most common complaints from women with patellar pain and lower back pain, which is normally a result of excessive anterior pelvic tilt, weak hamstrings, and tight hips.