Recently, there's been a very significant uptick in women's participation in strength and physique sports. More and more women are lifting weights. It's a long overdue and remarkably positive phenomenon.

Back in the 1980's, a woman cleaning 135 or squatting 200 was a very rare occurrence, and any women who could post numbers like that would be queen of the gym. Today, not so much. My Facebook and Instagram feeds are overflowing with woman clean and jerking 200-plus pounds, front squatting over 300 pounds, and pulling north of 405.

To be a female outlier these days, you've gotta be capable of doing things most men can't pull off. Case in point, Stefi Cohen's remarkable deadlift of 525 at a bodyweight of 123. Yes, it was sumo, and yes, she used straps. But honestly, how many 200-pound men can do that?

And let's give credit where credit is due. CrossFit has been an enormous catalyst in the recent rise of female strength around world. I have some issues with CrossFit, but this isn't one of them.

Despite this positive movement, there are still some ill-advised trends in women's fitness. Let's take a quick look at them, then talk about how women should actually train based on their unique physiology.

Apparently, if you're female and you've got a good physique, the key to social media stardom is to post videos of yourself "dance lifting," for lack of a better term.

You've probably seen this, but if not, imagine doing a cross between rhythmic gymnastics, lifting, and ballet while using 10-pound dumbbells. These admittedly-difficult routines typically involve performing two or three resistance-training moves simultaneously. Think lunge/bicep curl or squat/overhead press, while perhaps adding in a balance component, such as doing the workout on top of a park bench. In one recent video, a fit-looking woman does reverse lunges combined with dumbbell overhead presses while on a moving treadmill. No, really.

Now, posting stuff like this as a way of showing your athleticism, or simply for entertainment purposes, is fine. But more times than not, the implication is that the woman's physique was created by doing such nonsense. Nothing could be further from the truth.

A prominent phenomenon in women's fitness as of late involves structuring workouts around various jumping and quasi-plyometric drills. One common example of this involves placing your hands on a flat bench while hopping back and forth over it with your feet.

Drills like this have little to no strength or muscle-building benefit, but pose very significant orthopedic risks. Sure, you'll burn a few calories, but the risk/reward profile isn't favorable at all. If you spent that time squatting, you'd burn far more calories and also build muscle and strength, and with much less risk.

Over the years, many credible coaches have said that women should train just like men, for the most part. I agree with one significant exception – women need to train HARDER than men. What's "harder?"

Also by "harder" I mean more substance and less fluff. Women who are serious about their physique and strength goals can't afford to fritter their resources away working on BOSU ball curls.

The reason for this recommendation comes down largely to hormones. On average, women tend to have about one-tenth the testosterone levels as men. That's a huge disadvantage. It means that your training must be hardcore.

Your workouts must be built around proven staples such as squats, presses, rows, deadlifts, pull-ups, and so on. These multi-joint compound lifts deliver maximum payoff on your training dollar. As outlined in the Primary Pattern Workout Plan, if you base each workout around a squat, a push, a hinge, and a pull, you'll be off to a great start. After that, if you want to throw in a few extras just to keep your workouts fun, that's fine.

A second reason that women can't afford to cut corners in their training is that, when you're relatively small and weak (at least compared to a big dude), your workouts don't really do that much damage to your body. Consequently, recovery is much faster than it would be for a larger, stronger lifter.

For workout programming, this means that you can and should train closer to failure on each set, do more sets per exercise, rest less between those sets and perform more workouts per week than a guy would. Let's take a closer look at each:

It can't be emphasized enough that, on average, CrossFit produces a lot of VERY jacked women compared to other training philosophies. Let's ponder for a moment how female CrossFit competitors train.

They do the most hardcore movements imaginable (squats, clean & jerks, dips, pull-ups, handstand push-ups, muscle-ups, etc.), they train very frequently (sometimes every damn day in some capacity), and they use heavy weights for high reps, to absolute failure, and with minimal rests between sets.

You don't need to join CrossFit to train like this, but you can certainly take a few cues from them, and if you do, you'll be handsomely rewarded.

In many ways, it's tougher for females to build muscle and strength, but as you've seen, they have some advantages over men too. It's uniquely impressive and gratifying when you're conspicuously strong and muscular as a woman.

So assuming you're already on the path toward that goal, it only makes sense to optimize your efforts.

Those Instagram chicks prancing around with 5-pound dumbbells? They didn't build their bodies doing that and neither will you. Ditch the fluff and start training more hardcore than any man in your gym. 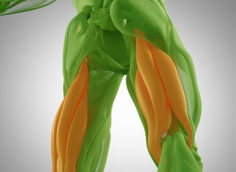 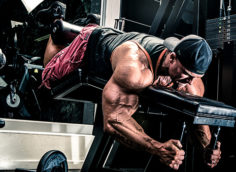 When it comes to building hamstrings, your rep range matters. Here's what to do.
Bodybuilding, Legs, Tips, Training
Eric Bach December 18