How's that for a title? I'm guessing that many of you are on the edge of your seat, ready to speed through the article so you can tear me a new one in the LiveSpill. The rest are likely getting comfortable, anticipating reading something that confirms what they already believe.

Either way, at least I have your attention.

First let me clarify: for the goals of improved strength, increased muscle size, improved athletic function, and improved general fitness, the bench press is the best exercise for the upper body.

The bench press is easy to tear down. You're lying on a flat board, pushing a perfectly symmetrical load away from your body; when does that happen in real life? Name a sport where anything similar to the bench press occurs?

Furthermore, lifters who are good at the bench are typically slow, barrel-chested fireplugs with T-rex arms.

You've heard it all before – and I'm calling BS.

The problem with knocking the bench press is that you have to put something else in its place. If you value an upper body pushing motion, you'll need something to replicate that. And if you care about training the pecs, delts, triceps, and lats along with other muscles, then you need something to accomplish that, too.

To that end, this article will take other coaches' "best upper body pressing exercise" and compare it to the lowly bench press.

The "functional" training guys usually advocate this lift. Why build pressing strength on your back when you need to display it on your feet? Makes sense, but why is it big, strong guys never do this exercise?

The problem with the standing cable chest press is that you can only press about 40% of your bodyweight. That sucks, as anybody can do that. Some have extrapolated from this that any strength above the ability to press over 40% of bodyweight is unnecessary, which of course is nonsense.

Many tend to forget if you're pressing against something stable, an opposing lineman for example, you and the other person actually create a more stable base. This increased stability allows you to use more force. This is why a lineman that could only bench 40% of his bodyweight would get destroyed.

Another functional favorite. If you're going to be on your back, why not press from a ball? Well, there are a few reasons. T Nation's Eric Cressey researched the use of balls for strength training and while he didn't study the ball dumbbell press directly, it's likely his research would carry over.

These tools, which can be good for rehab, can decrease strength as instability decreases activation in the prime movers. The ball dumbbell press does significantly challenge the core – I once pulled my oblique learning how to perform it with relatively light weight – but any time an exercise tries to do two things at once (work the core and work the pressing muscles), it usually fails to deliver in either area.

If you want to work your core, use the ab wheel or inverted sit-ups or Russian planks. If you want to blast your pressing muscles, then use something stable.

Although there's a bit of a learning curve, a good bench presser will be decent at using the ball. It will be much worse for a ball dumbbell presser moving to a barbell bench press.

Push-ups are a good lift, but the simple problem is that they're way too easy. When performing the push-up we lift about 60% of our bodyweight, which is still super light. Push-ups are also challenging to load significantly.

Most people don't perform the same ROM in a push-up as they would with a bench – bar touches chest, but chest likely doesn't hit the floor. It's also easy to cheat on a push-up, and push-ups alone do little for maximal size and strength.

The kicker is that, again, the bench press really helps push-ups. When you're benching bodyweight or more than 150% of bodyweight, push-ups become easy as hell.

But push-ups don't help the bench much. I've seen guys that could do 50-70 push-ups but couldn't rep their bodyweight for 10 reps on the bench press.

Dips are a good exercise, but they can't compete with the bench for the #1 spot. Dips can be rough on the shoulders, depending on how one is built. The bench press can be rough on the delts as well, but if you use a medium or somewhat narrow grip, the stress is often significantly reduced.

You can decrease the ROM on a dip, but now you're just doing partials. Dips are also hard to truly overload – sure, you can throw 50 pounds on the dip belt with ease, but add 150 or 200 pounds and your shoulders will feel like they're about to rip off.

Finally, you might be surprised at how little your chest is actually working in a dip. I found this out by doing a pre-exhaustion giant set for my chest. I'd fatigue my pecs by performing incline flyes followed by incline benches, and then go to dips – and amazingly, I barely felt my chest!

Even leaning forward and all that jazz has little effect for most. Dips simply hit the shoulders and triceps more than the pecs.

The one-arm push-up is quite manly – who doesn't think of Rocky when knocking these out? They're also an all-out assault on the core. But the load is still too light for strong people – about half your bodyweight. And I haven't seen great carry over from increasing one-arm push-up scores to other lifts.

I got quite proficient at one-arm push-ups (which isn't that common when you're over 200 pounds bodyweight), but didn't notice any other lifts go up, including regular push-ups or the bench press.

In short, the one-arm push-up is a nifty display of strength and athleticism, but it doesn't carry over well to other pressing exercises.

I thought ring dips would be the holy grail because I sucked when I first tried them, even though I was good at dips. I immediately bought a pair of rings (two pair in fact, one for my house under my deck and another for at the gym) and went to work.

I started getting better at ring dips and became somewhat proficient, doing reps with an 80-pound vest with relative ease. However, while I enjoyed getting better, I didn't see great gains in size and more importantly (at least to me), neither my bench nor my regular dips went up significantly.

The same can be said of ring push-ups. Good exercises and likely worth doing, but neither trump the bench press.

The Smith machine has little carry over to other exercises, or even real life. It can be a good tool for building size as it allows the lifter to use very heavy loads, but the fixed 2-D movement pattern does little to improve general neuromuscular coordination.

Spend a year on the Smith machine and you might get better at other machines, but hop onto a standard bench press and prepare to be disappointed. However, spend a year with a barbell and you'll likely be lifting the same weight or more on a Smith machine with little practice.

This is the exercise I take the least issue with, although the folks that like this lift often like the bench press as well, and usually perform both.

From a size perspective, I prefer the bench press because more weight is being used and the muscles are under tension longer, especially considering a big part of the push press is harnessing momentum.

From a strength perspective, I'd say it depends on how strength is measured (horizontally versus vertically). From an athleticism angle, I wouldn't have a problem with a coach claiming that a good push press is more important to an athlete than a bench press; I just don't think there's a ton of empirical evidence either way.

From a "functional" point of view, it's a wash, with perhaps a nod towards the push press. If you're good at either lift, whatever you do in everyday life will seem simple – most of us aren't required to lift 200 pounds over our heads or in front of us on a regular basis.

The push press does require good body awareness and good posture that's rare in trainees, but most can bench press well after they learn basic technique. Both exercises also carry over to one another to a certain degree.

Bottom line, if you love the push press, great, but I'd guess you're also training the bench press from time to time.

Got something I didn't list that you think is better than the bench? Post it in the LiveSpill and we'll duke it out.

Yes, this is a safe exercise... if you do it right. Here's exactly how.
Exercise Coaching, Tips
Christian Thibaudeau February 1 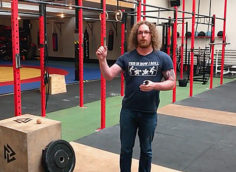 The harder you can hang on and squeeze, the stronger you can get. Try these drills.
Arms, Exercise Coaching, Powerlifting & Strength, Tips
Tom Morrison October 11

An athlete needs to develop power in every direction. This exercise develops side-to-side explosive power.
Athletic Performance, Exercise Coaching, Tips
Wil Fleming May 24
This is Lucky 13, a rapid fire Q & A session with a training or nutrition expert who matters. It's fast, furious, and to the point.
Training
Chris Shugart September 29