Overtraining Is Rare, But Overtaxing Isn’t

You train hard, harder than everybody else in the gym. So hard that you’re constantly sore, feel mentally drained for a good part of the day, and sometimes lack focus and get mood swings. Despite all this, the big gains aren’t coming. Even more frustrating, a lot of people are progressing at a faster pace, and they’re not killing it like you are.

Could you be overtrained? The demon that swallows gains and destroys motivation? First, calm down. Overtraining is a very rare and misunderstood phenomenon. But you could be overtaxing your body and its key systems.

We often get confused about overtraining because even the name steers us in the wrong direction. First of all, overtraining doesn’t mean training too much. Just because you did 30 sets for biceps in one session doesn’t mean that you overtrained them. It doesn’t necessarily mean that what you did was smart, but you didn’t overtrain them.

We all have our own recovery capacities, but the point is that overtraining isn’t simply about “training too much.” And getting injured doesn’t necessarily mean you were overtraining either.

The recognized sport-science definition of overtraining is:

“A physiological state caused by an excess accumulation of physiological, psychological, emotional, environmental, and chemical stress that leads to a sustained decrease in physical and mental performance, and that requires a relatively long recovery period.”

There are four important elements in that definition:

Your chances of developing real overtraining syndrome are very slim. In my whole life I’ve seen two or three cases and they were all Olympic athletes training 20-25 hours a week or more. If you’re unlucky enough to develop true overtraining syndrome, it won’t take you days or even weeks to get back in top form; it will take months.

Are You a Stimulus Addict?

If you’re reading everything you can about training and spend a good part of your day thinking about your workouts and how you can improve them, you’re likely a stimulus addict. Welcome to the club!

A stimulus addict is someone who fell in love with the actual act of training and using his muscles not so much for the gains but for the feeling and sensation derived from the workout itself. For these guys and gals, the training itself is its own reward. Being a stimulus addict has its pros. You’ll rarely lose motivation to train, you’ll stick to it over the long run, and you’ll never frown upon hard work.

However, you are the perfect candidate to train excessively, pushing yourself too hard, for too long, too often. A stimulus addict often prides himself on working harder than everybody else instead of getting better results than everybody else. As such, a stimulus addict is likely to become his own worst enemy – engaging in training practices that lead to stagnation (or even regression) and feeling like crap all the time.

If you do a workout that stresses the nervous system too much, you’ll suffer from what Paul Carter calls “workout hangover.” This is a very accurate term because that’s pretty much how you feel: lack of focus and energy, apathy, no motivation, and sometimes a headache. Not surprisingly, you can’t get in a good workout when you’re in that state, but you’ll feel like crap for the whole day.

You can also overload the hormonal system. In the case of training, it means producing too much cortisol. Cortisol is not the enemy per se. It has an important role in the training process. It helps mobilize energy during the session by increasing the breakdown of glycogen and fat stores to produce energy to fuel your muscles. Granted, it also increases the breakdown of muscles, but that isn’t really the big problem.

The big problem is that cortisol, testosterone, and estrogen are produced from the same “mother hormone,” which is pregnenolone. The more cortisol you produce, the less pregnenolone you have available to produce testosterone!

If you constantly overproduce cortisol, you’ll not only have a lower testosterone level, but what little testosterone you have left will have a harder time doing its job. This leads to less muscle, more fat, and no libido. In fact, one of the best signs of a low testosterone/high cortisol state is the lack of what is affectionately called “morning wood” and a drastic decrease in sexual interest. Another sign of excessive cortisol production is water retention and flat muscles. 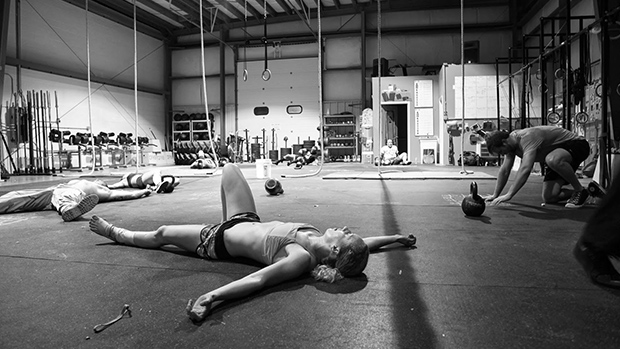 Training “On the Nerve”

Too much training volume seems to be the main culprit, but I’ll go one step further: Any training that causes mental stress will lead to a greater cortisol production. Just psyching yourself up to do a lift, or getting nervous about attempting a rep, will drastically increase the cortisol response to training.

Vassily Alexeyev (Olympic lifter with 81 world records) used to say that his secret was “never training on the nerve.” This means he didn’t psych himself up for any gym lift and never attempted weights that he wasn’t sure of making. He understood that training is about developing the body and its capacities and not about testing your limit.

Those of you who have competed in an individual sport that tests your limit in one capacity (powerlifting, Olympic lifting, track and field, etc.) know that a competition where you produce an all-out effort will affect your training for up to 10-14 days. Many will actually have symptoms of depression during that period. Every time you train “on the nerve” you’re essentially recreating the same thing (to a slightly smaller scale, but it can still be damaging and affect your training).

Training on the nerve might increase performance by only 3-5%, but it more than likely doubles the recovery time from a workout. That means you can’t train as often, and frequency is much more important than volume.

You can train a lift or muscle frequently without “overtraining,” and you can train it hard, but only if you avoid training on the nerve. If you’re doing work that can be potentially taxing on the CNS (heavy lifting, explosive work, going to failure), one way of reducing excessive CNS demands is to focus on keeping everything from the neck up as relaxed as possible. This will prevent an excessive CNS jolt that can indeed boost your performance, but can also make you hit the wall really fast.

Tensing the face, clenching your jaw, and having your neck look ropey can increase force production and is a tool that can be used when competing or maxing out. It comes at a cost, though. Your nervous system will take a lot longer to recover and you might even end up suffering from “workout hangover” the next day.

Inflammation and Lack of Progress

While some inflammation from training is a prerequisite for maximum growth – it’s an element that initiates the repair/growth process – too much of it will slow down your progress significantly. Inflammation reduces your gym performance (squatting with sore quads is much more demanding), but training while inflamed will also increase the stress response of your body.

Furthermore, during recovery, the body will spend a lot of resources trying to fix the inflammation problem, resources that won’t be used for muscle growth. While some soreness the day after a hard workout is fine, lingering soreness, especially if it affects more than one muscle at the same time, is a sign that something is wrong.

Signs of Being Overtaxed

Here are a few symptoms to look for that might indicate one of the three key systems – nervous, immune, or hormonal – is being stressed too much:

If you notice these frequently, you should evaluate your training program. It might be putting you in a bad physiological state.

Things That Push The Nervous System

The following push the nervous system hard. While occasionally doing one of them might not cause a serious issue, doing them as part of your regular training will lead to periods of stagnation and possibly even periods of regression. If you want maximal, long-term progression, avoid these as much as possible:

Things That Push The Hormonal System

The hormonal system is less prone than the nervous system to immediate/acute changes. This means that it takes a longer time to develop a problem. Unfortunately, it also means that it’ll be harder to know that you’re doing things wrong. And when you finally notice the symptoms, it’s too late and it’ll take longer to repair the damage. So it’s important to avoid the following as much as possible:

Some will point to the many pro bodybuilders or elite athletes that break these rules. Be aware that someone who injects hundreds of milligrams of testosterone into himself per week creates an enhanced hormonal system that’s mostly immune to mistakes. Someone who’s “clean” won’t have that advantage.

How to Avoid Burnout

While proper training and lifestyle management are the most important elements to avoid burning out, there are nutritional and supplementation strategies you can use to help prevent or solve the issues.