Have you ever seen one of those guys who can rip big ol' New York City phone books apart with their bare hands, or bend steel bars as if they were deep-fried sticks of Mozzarella?

A lot of times, they're just ordinary-looking folk – guys who you'd never guess to be that gosh-darn powerful. What's their secret? Have they made a pact with the Devil? Or conversely, has God granted them inordinate strength so they can whump Holy hell out of sinners?

I doubt if it's either. Personally, I suspect that these guys, in addition to having a lot of fast-twitch muscle fibers, have highly-tuned nervous systems. For some reason, probably biochemical, they can recruit a whole lot more muscle fibers for a task than the average Joe can.

Of course, it's quite possible to train the nervous system. This is the modus operandi of Louie Simmons, Dave Tate, and super powerful bastards the world over. They train explosively, often without much resistance (at least when compared to their potential). After time, this enables them to hoist enormous amounts of weight and take home the powerlifting trophies. Amazingly, some of these guys, particularly in the lower weight classes, don't always look all that strong.

On the other side of the fence, you have bodybuilders who, although they look like they could tear the lid off a tank, are often comparably weak. Many couldn't dream of lifting the amount of weight that accomplished powerlifters do. The reason? They don't usually train their nervous systems. They often train without explosive movements. Instead, they train slowly, deliberately, emphasizing the eccentric portion of movements, which is what largely contributes to muscle hypertrophy.

Charles Poliquin and Ian King pointed out many of them to me, but I don't think either of them invented or discovered the methods themselves. Still, I thank them for opening my eyes.

You know how your tongue sticks to the roof of your mouth when you eat Peter Pan peanut butter? That's the position your tongue should assume when you're doing ab movements.

There are a couple of reasons for doing this. For one thing, according to Paul Chek, the guy who discovered this concept, it helps you avoid neck fatigue. When you hold your tongue in this position, it recruits the proper muscles of the neck to handle the load and you get the most bang for your buck out of the movement. It also takes some of the stress away from the upper vertebrae that might ordinarily result.

To test this, put your tongue in its normal position, i.e., on the bottom of the mouth and resist while someone pushes on your forehead. Then, repeat the exercise with the tongue on the roof of your mouth. You'll be able to exert much more force with the tongue in the latter position.

This makes it a good thing to do, too, while you're doing any kind of direct neck work (wrestler's bridges and the like).

The second reason to do this while performing ab movements is a little bit more vague and a little more mysterious. For some reason, when you do ab movements with your tongue glued to the roof of your mouth, you feel much more of a mind-muscle connection. In other words, you increase fiber recruitment in your abs. Try it while you're sitting there reading this. First, contract your abs. Relax. Now, put your tongue against the roof or your mouth and try it again. You should be able to contract the muscles harder.

The Push This, Pull That Principle

Most people do successive sets of a particular exercise. They pump out 8 reps on the bench press, pick their nose for 60 seconds, and then do another 8 reps. This goes on until the muscle is properly pumped or the nose is properly picked.

Similarly, if you stretch the opposing muscle group in-between sets of an exercise for the antagonistic muscle group, you'll also get increased performance. Again, using bench press as an example, if you stretched your lats by pulling on an immobile post or bar, you'd "prime" your pecs for their next set of bench. With any luck, you could experience an increase in strength anywhere from 2 to 3%.

We're not 100% sure why this happens, but you can bet it's because of the nervous system.

In any event, if you take a rolled up terry-cloth towel – a smaller one, about the size of a hand towel – and place it behind your neck, it'll increase your strength on the next set. It's important that the towel be thick enough so that it exerts a slight pressure on the back of your neck. You'll also have to keep your head on the bench so that the towel stays put.

I'm not sure why this works, but I believe the towel, acting as kind of a "brace," forces you to align your spine, thus permitting proper neurological performance.

Of course, I could be wrong. I only know for sure that it works.

Years ago, someone discovered that if you wrap a couple of towels around a bar, thus increasing its girth, you end up recruiting more muscle fibers. Initially, lifting the weight becomes harder, but after using this thick-grip for a couple of weeks and then going back to a bar of regular diameter, you'll notice a significant increase in strength (in addition to adding size to your forearms).

Why would using a different-sized grip lead to increased strength? The answer again has to do with the nervous system.

If you want to try this but find using towels awkward, you can purchase EZ-grips, plastic doo-hickeys that fit around almost any bar and give you an instant fat grip.

If you've ever watched a baseball game, you've probably seen the guy on deck swinging a bat with a metal "doughnut" attached. In Babe Ruth days, they'd just swing several bats together at the same time, but the principal was the same: when you remove the doughnut, or simply swing one bat instead of a bunch, the bat seems much lighter and you can actually swing it more quickly and with more force.

This same principle was more or less applied to strength training by Coach Dragomir Cioroslan and popularized in bodybuilding by Poliquin and King (even though both of the latter use slightly different variations of the principle).

Anyhow, this principle is more accurately known as the mixed neural drive/hypertrophy program, at least when it pertains to weightlifting.

It involves doing 1 rep of a movement at near maximal weight, resting a few minutes, and then doing a set of 6 reps using a weight more or less appropriate for that rep range.

By doing that 1 near maximal rep and resting for 3 to 10 minutes, you can lift more weight for a set of 6 than you could if you hadn't done the single rep. This program is typically done in waves.

Here's an example of a squat workout using the 1,6 system:

Set one (after a proper warm-up):

Had this hypothetical trainee not done the single reps at 300 and 315 pounds, his 6-rep sets might have been done with poundages of 230 and 245.

By doing the heavy singles, you potentiate the nervous system, thereby allowing the muscles to lift more weight.

When I was a kid, the guy who made the French fries at the local McDonald's was named Screwy Louie. Louie was a little dim because, as legend had it, his head was run over when his dad backed the Buick out of the garage without looking. He made some mean fries, but he wasn't altogether there, if you catch my drift. Anyhow, this movement seems like something Screwy Louie would have done, had he been a gym rat.

The exercise is known as "Scapjacks," and they were presumably invented by a chiropractor name Mark Scappaticci. The Doc theorized that it was possible to instantly increase neuromotor drive by about 10% (thereby increasing muscle fiber recruitment).

What "Scap" figured out was that if you train the agonist and the contralateral antagonist at the same time, you work more efficiently. As an example, if you train the left tricep while simultaneously training the right bicep, something cool happens.

In neurologist-ese, about 10% of the neural fibers that cross over at the medulla oblongata reciprocally enervate agonist and contralateral antagonists. Let me translate: that means that some of the nerves that activate muscle fibers in the left tricep also activate some fibers in the right bicep, and vice versa, of course.

So, if you do a standing dumbbell curl with your right bicep and simultaneously do a single-arm triceps pushdown with your left arm, you get neurological overlap and consequently, increased performance. Just make sure you use the same tempo for both limbs.

Let's say you're doing one-arm cable curls with a low pulley. If you're like most people, you'd do them with the feet together, or in the same plane.

However, if you do the same movement, but place the foot that's opposite to the arm you're working in front of the other, you'll get increased performance. Let me paint a better picture. You're doing one-arm cable curls with your right arm. If you place the left foot in front of the other, as if you were taking a step and were frozen in place, you'll be able to lift more weight with the right arm than you could if you kept the feet together or in the same plane.

I don't even know how to begin explaining this one, but I'll give it a try. When you take a step forward with the right leg, the left arm swings ahead in tandem with the right leg. Conversely, when you take a step forward with the left leg, the right arm swings forward in tandem with that leg. When you do this, you're taking advantage (and I'm just guessing here) of the same phenomenon as exhibited while doing the aforementioned Scap Jacks. In essence, some of the nerves that activate the right leg also enervate the left arm, and vice versa.

I don't know if this principle would apply to other exercises, but if someone wants to experiment, I'd be thrilled to hear what they found.

Regardless of whether I convinced you to try any of these tricks, I hope I've at least helped reinforce the notion of how important the nervous system is in training. Master it, and you master strength, power, and athletic performance in general.

Here's why you should sometimes bench press without a bench.
Tips, Training
Christian Thibaudeau December 30 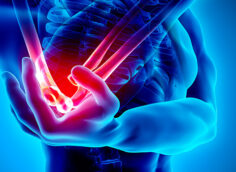 Here's what to do if achy joints are forcing you to take time off. Stop the most common lifting injury dead in its tracks and keep making gains.
Merrick Lincoln, DPT July 8