Keep it simple in the weight room – push, pull, legs, core. But sometimes you get stale and have to shake things up. The good news is that within the above template, there's plenty of room for variation: a change in tempo, sets and reps, or some sort of nontraditional conditioning. Below are six such variations. Some of them may seem crazy, but so do all new things, so don't knock them until you try them.

1 – Push-ups As Fast As Possible

Traditional wisdom tells us that one of the best ways to develop upper body power is the clap push-up, and that regular push-ups should be done with a slow and controlled tempo for strength endurance. While we definitely do deliver a large impulse (the summation of force over time) into the ground with each plyometric push-up, the research shows that push-ups performed as fast as possible without leaving the ground actually have a higher rate of force development, which is the key to power.

So make the switch to fast (though still full range of motion) push-ups, and consider sore wrists a thing of the past. Aim for a rate of one push-up per second or faster, and stop the set as soon as your push-ups slow down. Keep the rest periods the same as you would for traditional power exercises – at least two minutes. Try the same scheme for bodyweight squats, being careful not to bounce in and out of the hole.

2 – Negatives for the Anterior Core

Negatives have long been used as a way to get stronger in big lifts. Take the pull-up. If you're struggling to get your first one, the best way to get better is by starting with your chin over the bar and lowering down as slowly as possible. Now, with the advent of the Valslide, this same technique is possible for one of the most difficult, and beneficial, anti-extension core exercises there is – ab rollouts.

It used to be that if you couldn't perform the concentric phase of the rollout, you were out of luck and had to stick to boring old planks. But with the Valslide, you can roll out nice and slow, plop to the floor, circle the sliders back around, do a modified push-up, and roll out again. Negative rollouts are great for big guys, as well as folks working up to rollouts from their feet.

Don't have access to a fan bike, push sled, or battling ropes and still want to do some conditioning? You could just do burpees, but they're pretty boring by themselves. If you have a pull-up bar, though, try the brutal burpee pull-up combination exercise, which takes you all the way from the floor to chin up over the bar with every rep.

Alternating back and forth between burpees and pull-ups gives opposing muscles groups a chance to rest, allowing you to go longer and harder than if you were doing just one movement by itself. See how long you can maintain a pace of one burpee pull-up every five seconds, or 12 per minute.

4 – Isometrics With Moby and Sally

Tired of wall sits? For an endurance challenge unlike any other, try squatting to Moby's "Bring Sally Up." Queue up the song, and throw a barbell on your back, or just use your bodyweight alone. On "Bring Sally Up," stand up. On "Bring Sally Down," lower down into a deep squat and hold. The song is more than three minutes long, so don't be discouraged if you don't make it through to the end. Once you conquer the squat, try another exercise like push-ups or even pull-ups.

A true Tabata is comprised of 8 rounds of 20 seconds of work and 10 seconds of rest performed at 170% of your maximal oxygen uptake. That kind of all-out exertion is best elicited by sprinting. However, this doesn't mean we can't apply the same work-to-rest scheme to other exercises – even single joint movements.

At the end of a pulling workout, try a biceps curl "Tabata." If this doesn't give you a gnarly pump, nothing will. Do as many controlled reps as possible each round, no holding back in the early rounds. Be sure to choose a manageable weight that will allow you to do an average of about 10 curls per round for a total volume of around 80 reps.

Some might refer to this as "sissy" weight, but there's no shame in grabbing a set of 15-pound dumbbells. As an added challenge, keep holding onto the dumbbells during the rest periods.

Nearly every bilateral lower body exercise has a unilateral counterpart. You have split squats, single-leg stiff leg deadlifts, pistols, and even exercises for which no one can think of a name. As an amputee, I may be a little biased, but it certainly makes good sense: reduced spinal load, increased proprioception, and better transfer to sport.

The next step in unilateral training is single-leg Olympic lifting. We have all the same great benefits as before, plus now we're also developing explosive single-leg power. Try sets of 3 single-leg hang cleans per leg with 50% of your bilateral 3RM, alternating legs with each rep. Work up to 60%.

Remember, always stick to the basics, but never allow staleness to creep into your workouts. Use the six exercise variations above to add some excitement to your training. Just be prepared for some funny looks from the peanut gallery.

Want to build your triceps? Get on the floor. Here's why.
Exercise Coaching, Tips
Dr John Rusin March 27

The maximus gets all the attention, but if your other glute muscles are weak then your squat will suffer. Here's how to prevent that.
Tips, Training
Paul Carter November 28 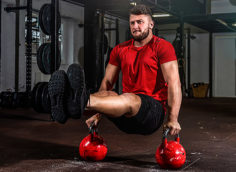 Give your relative strength a boost with these challenging bodyweight holds.
Training
Tanner Shuck April 17