Upper Body Exercises That Improve Everything

Want to build more muscle, get stronger, increase athletic performance, and strengthen your tendons? Then you need to focus on eccentric training and use these upper body exercises.

The eccentric part of the rep is where you're lowering the weight – the negative. (The lifting part is the concentric.)

You'll be 25-40% stronger when lowering a weight than lifting it. This is because of the structures that come into play during the eccentric contraction, things like the extracellular matrix, the internal structure of the muscle fiber, and the giant molecule titin. You know, all things the average gym-goer cares about!

Eccentric training involves higher muscle forces, producing a large amount of mechanical tension and muscle damage. These offer key signals to your body that tell your muscles to start strengthening and growing. Eccentric training also activates high-threshold motor units, which have a greater capacity for growth.

One way to tap into the uniqueness of the eccentric contraction is to increase eccentric time under tension or TUT. For example, slowly lowering a weight for 5-8 seconds.

There's little scientific evidence for or against focusing on eccentric duration. But it makes sense from a mechanistic and real-world perspective that this helps drive some hypertrophy.

But we're more concerned with how to increase eccentric load and absolute mechanical tension. For all the exercises discussed here, just try to fight the resistance on the way down. Take at least 3-4 seconds during the eccentric/lowering phase.

Mechanical eccentrics are simply where you manipulate your body position to overload the lowering part of a rep. The lifting portion of the rep is done using an "easier" version of the same exercise, or while the eccentric contraction is performed in a position where there's a relative mechanical disadvantage.

Often, this is done by manipulating lever arm length where the resistance is made to be further from the fulcrum during the eccentric. This makes it harder to lift the same weight.

This exercise will overload your medial deltoids eccentrically. Raise the dumbbells with the elbows bent, then lower them with your arms straight.

Using the scapular plane (raising 30 degrees forwards) will allow better joint centration while being easier on your rotator cuff tendons. It's very joint-friendly.

This exercise requires you to hinge off the edge of a bench or Swiss ball. It eccentrically overloads the long head of your triceps in the stretched position when your hips drop.

When you reach the bottom of the extension, raise your hips and change the torso angle and angle at your shoulders. Return the bar back to the top using this new, slightly easier position. Do these using an EZ-bar, barbell, dumbbells, or kettlebells.

You can press more than you can flye, so let's capitalize on that. Select a slightly heavier weight than what you might typically use for flyes.

Press the dumbbells up, then lower into a flye. As you lower down, leave a slight bend in your elbows and then attempt to keep your elbows aligned with your ears to maximally stretch your pecs. Bring them back in and press back to the start. Do these on a flat, incline, or decline bench.

Zottman curls are the perfect eccentric exercise since all you have to do is curl up using an underhand grip (easier), then switch to a palms-down grip to lower the weight (harder).

Inverted rows are a great way to hit your traps and rhomboids and help pull everything back where it should be.

The band has more slack (lower load) as your hip is bent. It's also easier to pull yourself up using this more vertical torso angle. When you straighten your hips on the lowering phase, the band has more tension, resulting in more load to fight as you lower down.

You want a slight decline bench and a heavy-ish kettlebell for this lats and triceps builder.

The lowering portion is performed as a standard pullover with very little bend in your elbows. To make the return to the top easier, bend your elbows, pulling the kettlebell in and close to your chest on the way up.

Because of the flexion/extension of your elbows, you change the lever arm length and make the pullover easier or harder. Straighter elbows on the way down work to overload the eccentric. Choose a slightly heavier weight than you'd typically use for pullovers.

To build muscle, do 3 sets of 8-10 reps using 3-4 seconds to lower the weight down. You could also try longer duration eccentrics, taking 5-8 seconds to lower and just 5-7 reps per set. Use this method sparingly on just one or two exercises per workout. 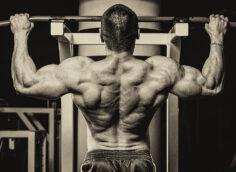 Pull-ups actually aren't a great measure of strength. But if you want to get better at them anyway, try these proven strategies.
Bodybuilding, Powerlifting & Strength, Pull-Up
Nick Tumminello September 14 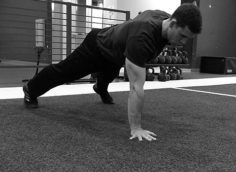 Most people can't do them. And the people who THINK they can do them probably aren't doing them right.
Training
TJ Kuster December 23

Most bodybuilders don't know how their abs function, or even how to train them effectively. Learn how now.
Abs, Training
John Paul Catanzaro November 27