Successful strength coaches tend to rely on exercises that offer the most bang for the buck. This explains the predominance of no-nonsense staples like bench presses, squats, and deadlifts in their strength training routines, with nary a triceps kickback variation to be found.

Another big bang exercise that receives a fraction of the attention it deserves is the jump squat.

You've probably never seen anyone perform jump squats or even heard of the exercise, which is a low down dirty shame. The jump squat is the ultimate combination exercise and it's a real ass kicker to boot, taking the mechanics of a squat and adding the power component of a jump.

Some coaches have publically praised the jump squat for its ability to effectively develop lower body power, yet to the mainstream lifter it remains in relative exercise obscurity.

The main issues are the jump squat's awkward setup (placing a loaded barbell on your back and jump), and seemingly steep learning curve.

For the former, tools like dumbbells, weight plates, weight vests, and sandbags are much easier to handle while allowing for more natural jumping mechanics.

Regarding the latter, the jump squat is actually a very simple movement to learn, especially when compared to the clean or snatch as there's no need to catch the weight. Just grab a weight and jump – it can't get much simpler than that.

To that end, the absence of power movements in your training could be the limiting factor in your squats. If you're not training in some way to create force as fast as possible, then you're limiting the firing rate of muscle action and as a result, leaving weight on the rack.

The quicker you can recruit your entire lower body into the squat, the greater force you can produce, and ultimately the more weight you can move.

If you can jump and it doesn't hurt, you're safe to jump squat. However, once you begin loading the lift, the risk for injury is greatly amplified. Learning proper landing mechanics becomes top priority.

Here's the quick and dirty:

If there's any knee deviation inside of the midline of the ankle, don't continue. Get your glutes firing first.

Why dump the weight? You still increase power but you're not stressing the fibers as much (5). Basically, it's neural system training at its finest!

Don't worry, after a few weeks you can start increasing the difficulty with other loading methods.

After getting proficient with the weight vest you can move back to the dumbbells or sandbags. This is essentially the same movement as before only now you hold the weights when you land. A combination of the two (weights plus vest) may be used to reach the prescribed load.

The eccentrically loaded portion of the lift adds a greater force component to the exercise and creates greater stability in landing (5). This transfers to the field by improving the ability to absorb hits, recover from sprinting, and show stability in cutting, not to mention a heavier squat in the weight room (3).

The final progression is the actual barbell jump squat. Using a barbell allows exceptionally heavier loads to be used versus dumbbells and weight vests. Trying to achieve very heavy loading with heavy dumbbells eventually hurts your knees. In short, stick with the barbell.

The bar should remain on the upper back. Pulling down on the bar as you jump keeps it from flying up and crashing down on your neck. Use a bar pad if needed to disburse the load.

Barbell jump squats remove all arm action from the movement. However, you gain true lower body power development in return, so there's a lot to gain if the correct load and technique is used.

Progressive overload is the basis for all strength training, even jump squats. However, attempting to progress too fast or starting with heavier weights than needed is a great way to end up with disc compressions and torn ACL's.

Although elite athletes have reported using as much as 60% of 1RM for the movement, this definitely isn't a safe place to start (6). Selecting the appropriate load should be based off a percentage of your 1RM back squat. This provides a manageable load that's safe to jump with, and more importantly, land.

A study showed that 55-59% of 1RM had the greatest output of power in trained individuals (6) and that loads of around 45% of 1RM produced similar results. This makes being able to handle sets of 3-5 jumps with 45% of squat max an appropriate starting goal.

With barbell jump squats, warm-up with 30% of your max for a set of 3-5 jumps. Then progress from 30% up to 45% while also working on mobility work specific to your imbalances.

You now have a thorough progression to the jump squat. So let's get to the program.

Perform the following after your lower body workout:

Although you'd be hard-pressed to find anyone doing them at 24 Hour Fatness, jump squats are an outstanding way to develop lower body power while effectively training triple extension of the hips, knees, and ankles. This can translate to both new PR's in the gym and big results on the field.

From a bang for your buck perspective, the power development derived from jump squatting can save hours in unnecessary training as you get the resistance training effect of squatting while developing dynamic power with the jump, all in a short learning curve.

This not only sets jump squats apart from other power movements, but makes them a must-learn exercise for your repertoire. Just remember to ensure proper landing mechanics and to select an appropriate load.

For all the misguided fears about the exercise's safety, the real beauty of the movement is its simplicity: if you can squat and jump, you can jump squat.

A new way to perform muscle and strength-building negatives on the squat, bench press and even the deadlift!
Bodybuilding, Powerlifting & Strength, Training
Joel Seedman, PhD December 23 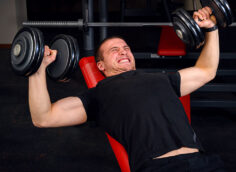 Training to failure may feel effective, but is it? Here are three reasons why it can work against long-term gains, according to science.
Bodybuilding, Powerlifting & Strength
Domenic Angelino April 20