People are always looking for ways to improve their big 3: the squat, bench press, and deadlift. This often leads to a mish-mash of experiments that involve bands, chains, boards, and shit hanging off the bar. But when you compete in powerlifting, the only thing on the platform you're working against is the loaded bar – no accessories are present.

With that in mind, the great majority of your gym time should be spent training in that fashion: moving a loaded bar. It's not that bands and chains don't have merit; it's that the loaded bar itself offers a myriad of ways to get better with it... without complicating things.

The plain ol' bar is really your best friend when it comes to strength development. All of those additions are more like the acquaintances in your life. Good for an occasional chat at the pub, but they probably won't be around come moving day.

The key to milking a loaded bar for all it's worth and increasing strength lies in two factors:

1 – You need the ability to produce more force from the bottom position of the lift.

Despite all the talk about strengthening weak points, you generally miss a lift because you're unable to create enough force for the bar to continue traveling through the sticking point.

A bench press that's slow coming off the chest probably isn't going to get through that transition portion of the rep where the triceps take over for completion. Getting stronger (duh) is the main fix for this. But train yourself to generate maximum force out of the bottom of a lift too.

2 – You need enhanced speed, tension, or both.

Many lifters perform the big 3 in a manner that makes them easier. It's an ego thing. Bouncing the bar off the chest in the bench press and cutting the squat really high are common examples.

But if you're trying to build strength in the lift, then perform your reps in a way that either develops greater explosiveness or more tension. In basic terms, explosiveness means faster; tension means slower.

It's the application of those two things, along with loading, that creates the magic you're really looking for. Here's how to make the magic happen.

Compensatory acceleration training, or CAT, was my bread and butter for the squat when I was powerlifting. The main idea is to move the bar as fast as possible throughout the concentric or lifting phase of the lift.

CAT squats often involve sub-maximal intensities, usually something in the 60-80% range of a 1-rep max, done for multiple sets with a static weight – you use the same weight for all the sets.

Lifters use this type of training during pre-contest phases for a strength competition. It's ideal because it forces you to focus more on technique development and explosiveness without getting beaten to shit by heavy weights.

To perform CAT squats, try to accelerate throughout the entire range of motion. It's not just exploding out of the hole with a sub-max weight, but continuing to drive as hard as possible even after you've crossed the normal sticking point. Think about squatting so explosively that the bar flies through the ceiling.

Now, the load should be heavy enough that this doesn't actually happen. But if it does happen, make sure to get that on video for social media because how cool would that be?

The weight shouldn't be so light that there's no carryover into higher intensities. Nor should it be so heavy that it moves slowly or takes a toll on systemic or localized recovery.

Think of 60% of your 1RM as the floor and 80% as the ceiling, though both of these are just guidelines. Some lifters will be able to move 80% with an enormous amount of speed, while others might move 80% with the same speed they move 60%. Some guys are naturally fast; others are grinders.

You should start a CAT phase with 60% using a good ol' 5x5 scheme for volume. Try to perform all 5 sets of 5 reps using 60% in 15 minutes or less. You want to flat-out destroy every rep of every set with the same amount of speed and ease.

To prime the nervous system before you get into the working portion of the squat session, do a single squat at a slightly higher intensity than what you'll be working with. Here's what that'll look like:

You can repeat this CAT squat session, but eventually you want to try and move to 70%. Same deal: 5 x 5, in 15 minutes or less, same speed for every rep of each set. Here's how that would look:

If your conditioning sucks, this will hurt you. That's good. Get your fat ass into shape.

Once you can do 70% 5 x 5 easily, you can move into a peaking cycle to test/demonstrate maximum strength.

Most guys do some form of paused bench press... if they aren't ego lifters. Bring the bar down, pause at the chest, do some repping. Sweet.

It's great in theory, but the application is sometimes lacking. Where? The pause itself. The whole point of the pause is to reduce the rebound from the stretch reflex so that the lift is much harder. Making it harder is what you're after.

And that's where the T-shirt bench comes in. It not only forces you to slow down considerably during the eccentric (lowering) portion of the rep, it'll make you hold the bar down near the chest under a tremendous amount of tension before lifting the bar back up.

The technique is quite simple: once you begin the eccentric or lowering portion of the rep, try to touch your T-shirt as lightly as possible at the bottom.

That part's important. And if you're doing a full range of motion, the bar does in fact touch your shirt anyway. But make it touch lightly, like you would a newborn kitten. Sounds simple, but it kinda sucks after 8 reps.

It's not quite a paused bench, but it might be better in terms of developing the bench press because of the control you're forced to apply when lowering it and at the chest.

Just like with CAT squats, be as explosive as you can on the concentric, but within reason.

The weight you use is important because if you're using a really light load, then your elbows are going to start cursing at you in a third-world language.

You can use whatever loading pattern you've been using with these if it's been working for you. Simply use this technique, then find out just how much ego you've been using in your training. The technique will let you know immediately.

Lifters use paused deadlifts, just like paused benches, for similar reasons. At least, that's the thought pattern. People say, "You pause in the area where your sticking point is and thus you get stronger and can lift more weight... yada yada yada."

There's a problem with this on deadlifts, however. Bench presses are paused in competition. Deadlifts are not.

In addition, think about the very thing we went over above. We want to train the body to move as explosively through the entire concentric portion of a rep. When brosefs do a paused deadlift, it's often during the concentric portion of the rep. They lift the bar off the floor, then have to decelerate, pause, and continue.

This does meet one criteria: creating more tension within the rep. But it eliminates the factor of needing to train power/explosiveness.

Let's fix that. Simply reverse when the pause in the deadlift occurs – do it on the eccentric (lowering) portion of the rep.

Doing paused deadlifts this way will naturally slow down the eccentric portion of the rep. Incidentally, one of the characteristics of the deadlift that make it somewhat lackluster is that it doesn't offer much in the way of eccentric tension. (There's very little "negative.") And in case you forgot, that's actually where much of your hypertrophy gains are made.

When you purposefully slow down the eccentric portion of the rep, it not only creates more tension, but for most people it'll help them find proper anatomical alignment for a lift. If you've ever done a set of deadlifts and each rep felt a bit different, the culprit is actually how you returned the bar to the floor.

The bar a few inches in front of you, and out of a more ideal leverage advantage, will mean the rep will be harder. That degree of hardness all depends on how many inches you were off from the ideal position.

When you do reverse paused deadlifts, you'll be forced to slow down the eccentric, pause before the bar hits the floor, then perform another rep. This does some amazing stuff for strength development, technique improvement, and muscle growth. That's the trifecta, right?

Don't go crazy on the weight while doing these. The axial loading from a tension perspective is pretty severe. Feel it out. Err on the side of caution. And use these sparingly, perhaps every other deadlift workout, for a couple of sets of five.

Where you pause your deadlift on the return to the floor is really up to you. My advice is to make sure that regardless of where you pause, you maintain a neutral spine at all times, and hold the pause for three seconds each time.

This will make for some nasty sets of deadlifts, and will probably make you hate me and your mother.

Strengthen your grip by doing your pull-ups or chin-ups with a thick grip attachment or a couple of towels.
Arms, Exercise Coaching, Pull-Up, Tips
John Gaglione January 9 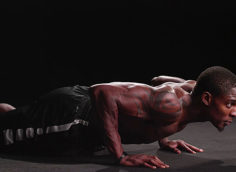 Pretend you're standing on a clock and finish off leg day with 3 sets of 10 (each leg).
Bodybuilding, Exercise Coaching, Legs, Traps
Paul Carter March 8

Here's how you can lose fat, gain muscle, get stronger, and be awesome in a 4-week butt-kicking program.
Fat Loss Training, Training
Erick Minor August 21