You often hear that "necessity is the mother of invention."

That's certainly true for me in the case of the split stance Romanian deadlift (RDL) – sort of.

To be honest, when I first thought of doing these, it wasn't even intended for me – and I certainly wasn't intending for it to be a badass exercise. That part happened accidently.

I first saw it more as a regression for my clients that were struggling with the balance aspect of single-leg RDLs. My thinking was that when I have a client that struggles with single-leg squats, I have them start with split squats and get comfortable with those before moving to the true single-leg version. And if it works for squats, why not do the same thing with RDLs?

I always use myself as a guinea pig for my new ideas before I use them with my clients, so I started playing around with them quite extensively, and before long started to love them. I've since tweaked the form to where they're now a mainstay in my program and one my absolute favorite hamstring builders.

The secret to this awesome exercise is in the setup.

To grasp how it works and how it should feel, stand up right where you are at your computer.

First, I want you to stand with a shoulder-width stance and perform a hip hinge motion as if you're doing a regular RDL. Keep a slight arch in your lower back with your knees slightly bent and focus on pushing your butt back at far as you can while keeping that initial lower back and knee position.

Or as I've written before, make like you're trying to take a no-handed piss with a boner. (And yes, this description has been trademarked.)

If you're doing it right, you should feel a decent stretch in your hamstrings.

Now step one foot forward 4-6 inches and the other backward 12-18 inches so you're in a split stance with your feet approximately two feet apart.

Next, perform the hip hinge you did before. I bet you feel it a heck of a lot more in the hammy on the front leg, right?

Put a bar in your hands and do it with some weight. That's your split stance RDL.

The devil is in the details. Most of the time when people get into a split stance, they just automatically step the rear leg back while keeping the front leg stationary. By stepping the front leg forward slightly, too, you not only increase the tension on the hamstring of the front leg, but also create a brace of sorts that makes it almost impossible to round your lower back as you come down.

This not only makes the exercise substantially safer, but also more effective because it ensures that you keep the tension on the hamstring and glutes rather than transferring to the lower back as often happens with a regular RDL.

In order to be able to step the front foot forward though, you really need to use a trap-bar because otherwise the barbell will get in the way of the front leg.

You can do a split stance RDL with a regular barbell if you must, but you'll need to adjust the setup by bringing your stance in a bit closer. It's still a good exercise in its own right, so if that's all you have then definitely do it, but a Dead-Squat bar or trap-bar is much better.

You won't be able to go as low in the split stance as you can with a regular RDL, so don't even think about trying to lower the plates down to the floor. Shoot to lower the bar until your hands are approximately even with your knees, but a little higher or lower than that is fine, too.

Just don't go so low that you start to round your back. It doesn't take a lot of range of motion to really feel these frying the hamstrings, so don't get overzealous.

The wide stance also provides a fairly stable base of support so you don't have to deal with the balance issues that you have with single-leg RDLs and thus makes for a very fast learning curve, even for those that don't do much single-leg training.

The added stability allows to you to hone in on working the muscles without worrying about tumbling over, and it also means that you can handle some really significant weights. In fact, I've worked up to 385 pounds for 5 reps, which isn't too far off what I can handle with bilateral RDLs, and that's after only practicing the exercise for a few months – which suggests that there's potential to overload the legs even more than in the bilateral version.

And anecdotally, I feel them more in my hamstrings and less in my lower back.

It's not just me, though – every person I've shown them to has immediately taken a strong liking to them and put them to use in their own programs, and that includes a strongman competitor and two powerlifters, one of whom boasts a pro total.

In fact, here's the Facebook status of that dude the day after trying them with me for the first time:

"That awkward moment when you're out grocery shopping and your legs buckle because your hamstring soreness is too much for your fat self to handle. Thanks Ben Bruno!"

Keep your back healthy by adding this feel-good move to your workout.
Back, It Hurts Fix It, Tips, Training
Lee Boyce April 11 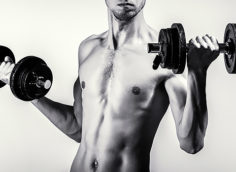 Can't reach your goals? Chances are it's because of one of these things.
Training
Ryan Sapstead & Mike Over March 11

Got a set of biceps that haven't grown since the Clinton years? Well, put down that cigar and start stretching some shirtsleeves.
Arms, Training
Nick Tumminello January 6