Is Training to Failure Worth It?

Most hardcore lifters regularly train to failure, but should they? Lifting something heavy for more reps feels more effective than leaving a couple of reps in the tank. Feelings can be deceiving, though. Training to failure regularly is actually counterproductive to long-term goals.

Here are three reasons why:

The latest studies lean toward dropping the training-to-failure habit.

An article published in 2022 underscores the most important takeaway: habitually training to failure will not result in greater muscle growth or strength gain than not doing so. (1)

Well, at least it isn't when using the normal loads most people use. Think about the loads that show up in most effective programs. When someone is going "lighter," they'll use something that feels about like 50 or 60% of their max.

When was the last time you focused on training with 30% of your 1RM? I ask because researchers found that training to failure CAN be beneficial when working with extremely low loads, around 30% of 1RM.

However, doing just 6-7 reps at 80% 1RM led to a similar degree of improvement compared to those who did 12-13 reps to failure at 80% 1RM (over an eight-week training period). If you can get similar results with fewer reps, why wouldn't you? The participants in this study were untrained, but similar findings were replicated with trained lifters.

In another study, researchers observed that trained individuals didn't experience greater mass or strength gains when training to failure as opposed to not doing so. (2) Participants trained with an intensity of 75% 1RM. This supports the notion that training to failure may not be beneficial when working with loads of at least 75% 1RM or greater, not just 80% 1RM or greater.

You get the point: training to failure won't really help. But what if you still want to do it because you just enjoy the feeling? Does it have a downside? Unfortunately, research suggests it does.

In another study, researchers investigated the effects of training to failure on different types of fatigue. (3) The study used well-trained participants and observed that peripheral fatigue and muscle damage were greater when participants trained to failure. Both are important factors to consider when evaluating the effects of a resistance training program.

"Peripheral fatigue" is a type of fatigue related to specific muscle fibers and the neurons that specifically innervate them. This is important because it'll reduce the amount of intensity (and endurance) those muscle fibers can produce. This can handicap you for the remainder of your workout.

Self-sabotaging your performance will also diminish your potential gains. This might sound jarring considering that the researchers from the first two studies didn't observe less strength or muscle gain when participants trained to failure. But that's just because their studies weren't designed in a way that could account for this sort of effect.

The first two studies involved training just one or two exercises each:

This is methodologically effective at answering the question of those studies: "Is training to failure generally ineffective when using realistic moderate-to-heavy loads you'd see in a typical program?"

However, in a real-life full workout, the fatigue from each exercise will accumulate, making the workout less effective the longer it goes on.

You've already experienced this many times. If you do a bench press at the start of a workout and an incline bench press at the end of that same workout but then switch their position the following week, you'll notice your performance on each will change. Peripheral fatigue makes the one you perform at the end a lot harder.

Training to failure will only make this worse given the effects of peripheral fatigue – it'll be far more pronounced.

Now, pretend you started that same workout with a lat pulldown instead, and it was the only pull-type exercise you did that day. Your performance would decrease far less than it would in the other example.

This is because the other exercises in your workout aren't increasing the peripheral fatigue of the muscles involved in the lat pulldown. The slight reduction in performance you'll see will be due to a host of other factors instead.

The difference between those two scenarios underscores just how impactful peripheral fatigue can be. Don't make it worse by training to failure.

Changes induced by hormonal responses can sometimes take a while to manifest when it comes to elevating or reducing muscle and strength gains, especially for a trained population. Their effects won't be pronounced unless compounded by a full workout.

In the past, training to failure was widely accepted as the go-to because of the whole "no-pain, no-gain" mentality. But if you care about increasing your training efficacy, consider removing (or at least severely limiting) sets to failure.

The RDL is getting popular. Good! Read this and make sure you’re avoiding the common mistakes.
Deadlift, Powerlifting & Strength, Training
Mike Robertson March 22 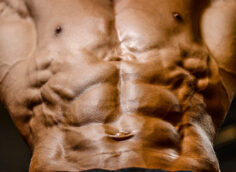 The bench press may be everyone's favorite upper body barbell exercise, but its shorter-ranged cousin could be even better.
Bench Press, Training
Eric Bach February 13