I was told I was going to be brought up to meet "the lifers." I was wondering what the heck else I'd learn after the last conversation. I assumed I might hear the same stuff, possibly more information on bodyweight training. I was wrong. I was about to learn more about prison life and more about training for boxing, sanity, and what you do to stay alive in prison.

I met the lifers upstairs, near the indoor gym. The gym had a basketball court and a weight area. The weight area was pretty cool. The heavy barbells had the weights welded on, making them fixed weight. The inmates called the skinny bars "pig iron." The benches were made of steel, even the preacher bench.

A few of the corrections officers were working out on a heavy bag and doing some curls. I was surprised to see that the majority of these guys didn't look very physical. I was told that there were a few serious officers who were pretty jacked up, but I didn't see any during my visit.

When I met the lifer's, we all sat down together and started talking about my previous conversation with the "big guy." They were against this style of training – going heavy all the time and being too big to move your body athletically. A few of these guys were former members of the prison boxing team. They took pride in this, but unfortunately the boxing team no longer exists. The gym I'd just seen used to have a ring and a few boxing coaches.

They rattled off endless names of boxers who were in the prison and got out, some making it into the pro ranks, others getting murdered out in the streets, and some ending up back in prison again.

They said being on the boxing team wasn't open to anyone. The team members would get a special jacket and they wore it with pride. Inmates who tried to join the boxing team to learn some fighting skills to use against others were quickly removed from the team, sometimes with force.

They called the weight training done at the weight pile "jail house training." Things like benching while bouncing the bar off the chest wasn't impressive to these guys. Doing heavy seated military presses with a big arch in the back was no different than incline benching, they said. These guys emphasized strict form in all their movements. They called their style of training "natural training."

They started asking me how I train my own athletes and they loved the idea of using tire flips, sledgehammer work, and sandbags. They spoke about how Muhammad Ali used sledgehammers for his training.

These guys loved talking about boxing. Their boxing coach would have them do circuit training using any skill or implement they had available to them. Each skill or tool was used for three minute rounds. The circuit was repeated twice:

Sometimes they'd run with the heavy bag, doing laps around the basketball court. If they were allowed to use weights, they did benching for high reps and light curls using 15 pounds. Sometimes they'd do shadow boxing with these 15 pound dumbbells as well.

They became enthralled in the discipline behind boxing. The coaches instilled in them hard work and dedication, not just using boxing for starting problems in the prison. If they did use their boxing in such a negative manner, they were off the team.

They'd take a pillowcase and wrap up a few T-shirts inside of it, hanging this in their cell and using it as a speed bag for extra training. Bodyweight exercises were the norm for these guys, doing sets of 50 push-ups scattered throughout the day. Now that there's no boxing team, one of the guys said he still has to do his 5 x 50 push-ups every morning or his day just isn't right.

His day would start at slightly before five in the morning, cranking out various push-ups, shadow boxing, pull-ups, dips off his toilet bowl, and isometric training. His isometrics included doing military presses with his hands on the doorway, as well as isometrics of side laterals inside the doorway.

He had guys that were cleaning the floors bring him buckets and the sticks from the mops. He'd hang the buckets off the stick to do curls. When they went outdoors, they did pull-ups (weighted and non-weighted), dips, sit-ups, used the ab wheel on the dirt, and ran "wind sprints" on the track going forward and backward.

Sometimes they'd run for the entire hour on the track holding a 20-pound dumbbell behind their neck. The boxing team was allowed to wake up early and get to the field before the inmates and before breakfast so they could train.

These inmates had immense respect for their coaches. Respect wasn't a word to be used loosely either. They told me about a big guy who came up to the gym to start boxing. He'd skip training sessions regularly and talk trash about his skills in and out of the ring.

The guys told me he mouthed off to one of the coaches during a training session one day. The coach told him not to come back, but he slapped the coach in the face and said he'd return tomorrow. He did return the next day, and other inmates made sure he never returned again. He was beaten with poles and fists and died later that day from his injuries.

I asked what the younger inmates do to keep out of trouble when they get to the prison. I assumed that being 18 or 19 and walking into one of the most feared prisons in the state would scare these kids shitless. These guys said, "Shit, these young fucking kids are the laziest motherfuckers. All they wanna do is smoke weed, if they can get some!"

"They come in here from street gangs thinking they're all tough and shit. They try fuckin' with the older guys who've been here for 20 or 25 years because they think they can get an edge on these guys. These guys don't want any trouble with anyone. So these young kids end up getting killed."

I asked about the inmates in general, and if they had to lift weights to gain some sort of an edge in the prison. "You never know why some guys lift weights," one lifer said. "Some guys can be all pumped up but they might like to take dick. So you never know why the fuck some of these guys work out!"

Another lifer piped up, "Some guys work out in the hot summer and then I tell them they need to take a shower. I tell them that shit isn't healthy to walk around sweaty all day and not shower. These guys are scared of getting raped here. I admit, I'm a man and I have my needs, but if you don't wanna take dick in prison, you're not gonna take dick! I don't care if motherfuckers are coming after me with chainsaws, I'll fight all them motherfuckers and they're gonna have to kill me if they want me to take dick!"

They started asking me questions about glutamine, green tea, creatine, vitamins, and nutrition. They had a FLEX magazine there and they'd been reading all the ads about various supplements.

A few of the guys drank green tea on a regular basis, usually a few times a day. They weren't sure if they felt charged up from glutamine and creatine or if it was all in their heads. I explained to them what placebo effect was and they were excited about the new exchange of information.

When they spoke about nutrition they mentioned how they would eat "light," sometimes skipping a meal such as breakfast or lunch. They said eating is what determined how they'd perform. If they ate heavy, they moved sluggishly.

It was interesting to see how there were two schools of thought that day. One guy wanted to use big weights and nothing else. The other guys were all about using their own body for training. To them, being able to train in the weight pile was a privilege, not a right. They wanted to always be able to train effectively using only body weight, just in case the weights were taken away from them.

They told me that after all the years of training they now understand why they do it. Training is their meditation and their own form of therapy. Without their morning push-ups, the day just never went well. They'd be angry and on edge, but the training took that away from them and helped them maintain some sanity. They kept going back to their days of boxing and how grateful they were for the boxing coaches who educated them and helped them grow into better men.

The time flew by as we chatted. These guys were laughing at some of these stories, got a bit emotional over some of them, and told me how much they enjoyed our conversation. It was about time for them to head to lunch, so before they left they brought me back to the gymnasium.

They reminisced about where the boxing ring was, showed me where they'd run stairs for conditioning, and then off we went. We all walked down to the main walkway where everyone was heading to lunch, the field, or their job.

Finally, after four hours on the inside, I was on my way home. The visit was awesome and I had a blast talking with these guys. I felt a bit shitty after leaving though because the guys I spoke with were cool. These conversations easily could've been over some steak and beers at a good restaurant.

Call me human; call me a pussy. I don't really care. Going behind the walls of this prison was an eye-opener to say the least. Lessons in lifting and lessons in life were learned here. These guys had some shitty conditions in this "human jungle" and they were making the best of their situation.

And maybe that's something we can all learn from.

Heavy weights. Forced reps. Negatives. They freakin' hurt. There's just no denying it. And yet we punish ourselves with these techniques like a bad boy at Mistress Cruella's House of Pain.
Training
Lonnie Lowery, PhD June 15

If you only had a few weeks to fine tune your physique and look your best for an event, what would you do? Here's what our pros said.
Bodybuilding, Diet Strategy, Fat Loss Training, Training
T Nation July 17

Get focused, burn fat, build muscle, and train like someone who's serious about getting results. Don't have a program? Use this.
Metabolic Conditioning, Powerlifting & Strength, Training
Tony Gentilcore September 6 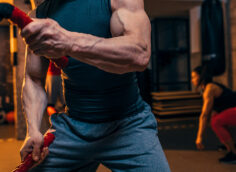