The more I study it, the more I realize how amazing the human body is. Although science is constantly making strides, what we don't know about our own physiology still far exceeds what we know.

Have you ever tried to imagine how your body developed? All the intricacies that go into every simple human movement and sensation, and how we're designed to interpret this information? It's amazing!

This article will offer an interesting look into the mechanisms behind the movements of the body, focusing on one important area in particular, at least to athletes: the glutes.

The Only Constant is Change

The human body is in a constant state of evolution. From developing resistance to new influenza strains like H1N1, to handling new sources of nutrition, to adapting to new physical stresses (or lack thereof), human beings continue to change to suit the challenges of our environment.

If we can agree that this is happening today, we can also agree that it's been happening for millions of years.

Since early man first came down from the trees when the climate started to cool millions of years ago, human beings have essentially been concerned with three things: energy in, energy out, and staying alive. This meant that we needed to try to conserve as much energy as possible while also figuring out how to get food.

This is important, because although much has been made recently of how our food choices are changing and its effect on our bodies, far less attention has been paid to why we spend energy the way we do when we move or exercise.

Did you know that a simple change in efficiency had a lot to do with allowing us to eventually take over the planet?

The one "giant leap" for mankind ruling the Earth was going from quadruped to walking on two legs.

Imagine walking on your hands and feet everywhere – think about how much more energy your body would spend as a result of the increased muscle mass used to fight against gravity.

Man solved this issue by eventually becoming upright and balanced on two legs. This decreased the overall energy expenditure, and also changed the shape of the pelvis, the length of the legs, and the angles of how certain muscles of the body were used.

More importantly, scientists hypothesize that this new reserve of energy allowed man to shunt blood and nutrients towards developing a large and powerful brain that gave him an advantage over all the other creatures on the planet.

Although this process helped to reduce energy expenditure and gave us the intelligence to outthink other species, our bodies still have remnants of these ancient mechanisms to make sure that we continue to be as energy efficient as possible. An example of my hypothesis is the gluteus maximus muscle.

The gluteus maximus muscles are the largest muscles of the body. As a result of their size, they'll require the highest energy cost metabolically to use and rebuild if they're activated and broken down with training.

I argue that because of this, our genetic code predisposes that these muscles only be used at times of high stress, in which the trade-off for higher energy expenditure is worth it.

To support my theory, sprinting has been found to be one of the best glute activators, versus activities like squatting or picking something up. This makes sense, since an early human that had to activate these muscles to escape a saber-toothed tiger made a wise tradeoff: expend more energy or become brunch for the big cat.

Compare the glutes to the pecs. Guys that train a lot often complain about their pecs being sore – because men love to work their pecs. I argue that if these same guys did as much glute work as pec work, most would surely need new jeans.

So it starts with checking glute activation. An easy exercise I use is the single-leg bridge. Start on your back with one knee bent and the foot on that leg on the floor.

Cross the arms over the chest and keep the opposite leg in the air. Now lift your hips into the air. Is it your glutes or hamstrings doing all the work?

If the answer is hamstrings, then you have a case of "Glute Hamnesia" and your glutes are in need of retraining. Here are two great exercises to re-educate the glutes:

Lie on your stomach with one knee bent. Using your glutes, lift the sole of the foot on the bent leg towards the ceiling and hold for 5 seconds. Relax and repeat for 2 sets of 5 reps per side.

Lie on your stomach with one leg crossed behind the other. Lift the outside of the thigh of the bent leg toward the ceiling. Relax and repeat for 2 sets of 5 reps per side.

Strength Exercises for an Iron Backside

As I mentioned in Train Like A Man 5, one of the best exercises for glute activation is sprinting. This is due in part to the body's survival programming that only allows us to tap into these monster muscles in times of dire need.

When was the last time you sprinted all out? I say if you haven't sprinted at least twice a week for at least 5 reps of 50 yards, then you're that much closer to death.

It sounds harsh, but as the body loses its ability to do what it was designed to do, just like with early man, the end is near.

Because of the increased metabolic demand, larger muscles like the glutes also need more time to recover. They don't need to be worked as frequently as the smaller muscles of the body. Sprinting twice a week and performing glute specific lifts once a week will be enough.

Here are a few other great exercises for glute specific strength.

I credit "The Glute Guy," Bret Contreras, with introducing me to this fantastic exercise.

Begin seated on the floor with the barbell across your waist (padding is recommended) and your shoulders against a stable bench. Starting from bent knees, drive the feet into the floor and press the hips (and the barbell) up toward the ceiling. Hold for 2 seconds, lower and repeat for 4 sets of 8 reps.

Begin bent over a hyper machine with the band held around the back of the neck. Extend to a straight position and hold for 3 seconds. Lower under control and repeat for 3 sets of 6 reps.

Now that you've worked on the major glute muscles, don't forget to hit the minor ones as well.

Trainees often skip working some of the body's critical, smaller support muscles, arguing that the big lifts were enough to "get the job done."

However, if you agree that the rotator cuff is important to keep strong and healthy for successful long-term upper body training, then think of the hip abductors as the "rotator cuff" of the hip.

Here are two of my favorite hip abductor activities using a very simple piece of equipment:

After putting on an ankle band, get into a half squat position with the shoulder blades pulled back and the shoulders externally rotated.

From here, step out to the side with the left foot, leading with the heel. Then bring the right foot back to meet the left. The right foot should be brought back slowly under control, and the foot shouldn't drag on the floor.

This is one of the most demanding hip exercises I know due to the isometric action of the glute muscles.

Begin in the half squat position with your feet pulled apart as much as possible. After assuming this position, take small steps forward keeping your feet as far apart as possible. Perform 4 sets of 20 meters.

This video shows the side walks and monster walks:

I hope this article reminded you not to forget about the "big" things. The gluteus maximus is a huge muscle that deserves our attention – but you must first "wake it up" before putting it to good use.

Fortunately, the payoff for this extra bit of attention is a leaner, more muscular backside, and likely a healthier, longer, more enjoyable life.

As a slogan on a t-shirt reminded me recently, you have to get off and work yours so you can kick theirs!

Between working 40-60 hours per week, carting the kids around, or being forced to take those swing dancing lessons you promised your girlfriend (we've all been there), the last thing on the "to do list" is going to the gym. Mr. G has the answer: the Two-Day Workout.
Training
Tony Gentilcore March 1 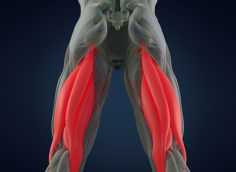 Get your metcon on and have some "fun" too. Here's how.
Metcon, Tips, Training
Eric Cressey April 9
Anabolic Stretching for Anabolic Gains
Training
Don Alessi February 20