The Olympics are upon us. Majestic athletes are competing to see who's the best on the planet in their chosen sport. The results will be historic. Some stories will even become the stuff of legend.

In sport today, especially regarding training, much of what we perform is the stuff of legend. Although this may keep us inspired, sometimes following legend can romantically blind us from what we really want to accomplish.

I have a theory about the current mindset about fitness in our society. To get strong, fit, and lean, people believe they should run. No, I used that important term too loosely – they go out and jog.

We think we're running, when in fact we're jogging the wrong way and for all the wrong reasons. My theory is that fitness (and the shape of most of us) could be quite different if we were sold a different legend.

The Baron and the Marathon

We run marathons and jog everywhere else because a few French aristocrats in a salon back in the late 1800's liked a poem.

The poem was about a Greek messenger named Pheidippides, and the guys in the salon included Baron Pierre de Coubertin, the founder of the modern Olympics and a buddy of his that liked poetry.

The Baron, inspired by the games held by the Wenlock Olympian Society, reignited our passion for the modern Olympics. For that we must thank him. We have, however, forgotten to also thank him for the jogging craze that's alive and well over 100 years later.

There are many versions of Pheidippides' story, but in the poet Robert Browning's version, the messenger runs from Marathon to Athens – some 26 miles – to warn of an impending Persian invasion. He then unceremoniously drops to the floor in a sweaty heap, and well, dies.

The Greek historian Herodotus tells a different story and so do others throughout history, but the take home message is the same: some Athenian military commander basically said, "Dude, you're obviously not a fighter and your ability to sing show tunes hasn't proven helpful on the front line, but you are really skilled at running away from stuff, so go run and get us some professionals."

The guy stepped up, but it wasn't all that important in the grand scheme of things, and in what can only be considered a real downer move, dies for his efforts.

Did anyone miss the punch-line? The guy curled over and died. That should've cemented it in everyone's "things we really shouldn't do" list, next to using a hair dryer in a bathtub and naked beekeeping.

Instead, the Baron romantically gave the marathon a cool name and unknowingly created a future of millions of dollars in sign ups, shoe sales, carb gels, shin splints, and Porta Johnny rentals.

Can you imagine if the Baron and his friend had a love for U.S. folklore instead of that of the Greeks? I have a very different scenario that might've happened, and perhaps the world might be bigger and stronger as a result.

Contrast the story of the Marathon with the legend of John Henry, the Steel Drivin' Man. The way this one goes is, the owner of the railroad John Henry worked for bought a steam-powered hammer that he thought would replace the work of the men on John Henry's crew.

John Henry, not wanting to lose his job and determined to protect the jobs of his men, challenges the steam-powered hammer to a drilling contest: man against machine. With his 14-pound hammer, John Henry beats the hell out of the steam-hammer, collapses, and dies.

Another romantic story, another tragic ending. The style of training, however, couldn't be more different. Imagine if John Henry had a better press agent than Herodotus?

He could argue that one guy fought while the other didn't. One guy stood up and confronted the enemy, while the other ran away. One guy was big, strong, and could do immensely powerful things over a period of time, while the other guy was skinny, scrawny, and was most effective in a fight when he was running away from it.

If the Baron would've fallen in love with story number two, perhaps today we might all have a closet full of hammers instead of running shoes. Calluses today would be on our hammer hands instead of our hammer toes.

I know there are some people that will take offense to this article. I don't write this to offend anyone. If you love jogging, fantastic. People like smoking and drinking, too, and I'm not writing to change what you like – I'm writing to offer my opinion. That doesn't mean it's right; it's just what I think.

This series of articles is designed to help you Train Like a Man. What does this mean? It means I want you to build muscle, increase Testosterone, and tap into your primal nature. That's how the human race was designed to work, to move, and to train. So I wrote this piece to suggest that maybe we've chosen the lesser of these two legends as our training and fitness ideal.

Train Like A Man is also about delivering information on how to get the body you want. In our world of terms like "functional" and "performance," I'm not sure why "vanity" became a curse word, but it did.

Did you ever notice most "joggers" tend to look the same? They're either skinny and weak, or completely overweight and injured. Contrast this with the images John Henry evokes: a big, jacked, heroic dude with a hammer and the courage to stand up for his friends – a winner with a physique, ironically enough, comparable to a Greek god, not some scrawny messenger who was sent away from the fight to fetch some real men to help.

When I'm in the gym, I'm not particularly interested in what people are doing. What I'm focused on is why they're doing it (hence this article), and in my experience, people choose their exercises (and workout methods) using what I refer to as the Training for Warriors [TFW] Illogical Four. This means an exercise or program is one of these:

Is distance jogging new? Not really, since it's been around since before all of us were born. Is it cool? Not really. Does it produce fatigue and result in soreness? Absolutely. Jog distance as a habit, and your life will suddenly revolve around the proper placement of band-aids and the all-too-frequent application of nipple cream.

To be clear, I'm not saying it's not an impressive feat to churn out 26.2 miles at a five-minute-per-mile or less pace. If that's your thing, and you're an elite marathoner, more power to you.

Think about this, however: the primary goal for 99.9% of the people lining up to run a marathon is simply to finish. This takes spirit, will, and commitment, and I respect that – but people also tell me they're jogging to lose fat and build muscle.

All jokes aside, I mentioned above that when you ask people what they want from their workouts – regardless of what they currently do – they'll tell you one (or both) of two things: they want to lose weight (particularly fat) and they want to build muscle.

The trouble is, the common belief in this country is that to do these things, you have to go out and buy a pair of running shoes and start racking up mileage. I can tell you from experience – especially the past decade of research and investigation that's gone into the writing of Warrior Cardio – that it just doesn't work this way. We've veered down the wrong path, and we've got the Baron, sitting in his little salon with his wig-wearing buddy, to thank for it.

My new book was designed to increase awareness and set rules for the recent concept of metabolic training. Old habits, however, die hard. Instead of a metabolic, John Henry-esque ideal, most still subscribe to the distance ethos, when we should be training more like a sprint. We suppress, and so we suffer, as do our nipples and inner thighs.

Following are two metabolic workouts featured in my book Warrior Cardio that get both the heart rate and Testosterone surging; something that might be hard for the average "jogger" to do.

I believe that if you're doing more than about 6 reps, you're working cardio. Since fat loss and muscle gain are probably two of the most common desires of men in the gym, here's my version of cardio that will jack up both your arms and heart.

Hit the bench for as many reps as possible. Rest 30 seconds and do the same with deadlifts, dips, and chins and record your total number of reps.

Rest five minutes and repeat for 1-2 more sets. Not only will you hit all the big muscles, you'll get a great workout done in less time and with a cardiovascular benefit too!

If 275 is too much to begin with, adjust it. Try starting at body weight or even by adding 5 or 10 pounds to body weight and work up from there.

There are two ways to use the Doubler: One way is to find a number you can complete without stopping, while the other is to pick individual start numbers, allow yourself rest during the set if necessary, and record your best time.

Below is a sample Doubler using the bench, dips, and pushups. Hit this for 3-5 sets with 2 minutes rest in between and see if that doesn't get the heart rate up.

If you put a wild animal in a cage and restrict its movement, what happens? Three things. It gets fat, it gets infertile, and it goes insane. As a race, humans are in a cage and we're going insane – and getting fat and infertile too, I might add – but we just don't know it. The sprint could be the cure. Metabolic-style training – think John Henry – can set us free.

Now that the ground work is set, the next article will attack the "long, slow, distance versus the sprint" controversy.

If it looks like you're having a seizure when you train abs, you're not getting much benefit... and you're asking for injury. Try this instead.
Tips, Training
Dr John Rusin August 24 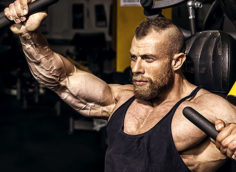 The idea of muscle confusion is stupid, but strategic variation is different. Here's how to use it to keep the strength and muscle gains coming.
Bodybuilding, Powerlifting & Strength, Training
Tom MacCormick September 5