You don’t have to bench. Yup, I said it. Now, take a few deep breaths before you unleash your inner Internet troll and hear me out.

To be clear, we’re talking about the barbell bench press here. There are exactly two types of people who do have to bench: competitive powerlifters and people who have really heavy stuff fall on top of them.

For the rest of us, benching is a matter of choice, based on multiple factors, including individual goals, injury history and mobility limitations, among others. But the truth is, the cost-benefit analysis for the barbell bench press comes up short.

On the other hand, does it matter how much you can bench? Really, does it? When you compare the barbell bench press to the same movement performed with dumbbells, there’s no question you’ll use more total load on the bar, but dumbbells still win this match-up.

Benching with the bar locks your hands in the same position throughout the movement, which prevents the arm from rotating freely to keep the humerus properly centrated. This leads to potential overuse injuries, particularly the lifter’s nightmare: tendinitis.

With dumbbells, you have about 180 degrees of rotational leeway. You can go anywhere from a reverse grip with your palms facing you, to a fully pronated grip. A neutral grip (palms facing each other) or semi-neutral grip (palms angled halfway between neutral and fully pronated) is ideal for allowing your shoulder to maintain optimal alignment. For minimizing injury risks, dumbbells get 1 point. 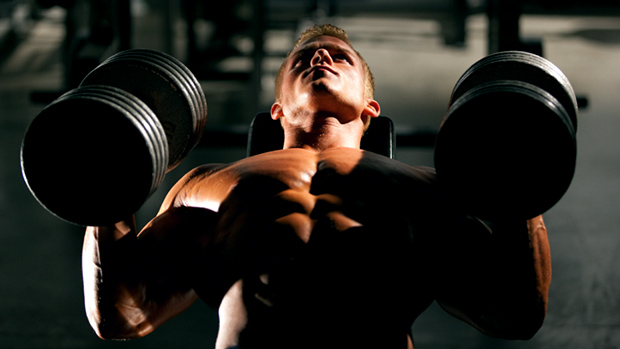 EMG studies have demonstrated that pec activation with the barbell bench press is relatively minimal, particularly in comparison to the same movement performed with dumbbells.

This is likely due to the fact that you get close to 90 degrees of medial rotation with dumbbells verses only about 60 degrees with the bar. That’s nerd speak for “you bring the dumbbells together at the top.” Greater muscle activation leads to greater hypertrophy. That 1 more point for dumbbells when it comes to pec size.

And if size is your main goal, don’t forget about dips, flyes, weighted push-ups and the dozens of other chest builders out there that don’t involve a bar and a bench.

You Can, But You Don’t Have To

Unfortunately, it took more than twenty-five years of training before I realized that it just isn’t worth it for me to bench. Every time I’d go back to heavy benching, it was a matter of time before a shoulder problem would rear its ugly head. Of course, I stubbornly kept going back to it. Cuz, you know, I “had” to bench. It got to the point that I was basically unable to do any kind of pressing movement, and scratching my own head was painful.

A year later without barbell benching and my shoulders are healthier than they’ve ever been. Instead of the constant stagnant cycle of “bench, get hurt, work hard to get back to the same point, repeat,” I’ve seen genuine progress in size and strength without the regular setbacks.

Remember, I never said that you shouldn’t bench, just that you don’t have to. Look at the situation objectively and draw your own conclusions.