The push press is like the upper-body power clean. I think I've called it the upper body squat previously but that was wrong. The squat can be performed slowly. In fact, when you have near limit weight on the bar, slowly is the only way it can be performed!

But the push press, like the power clean, HAS to be performed fast even with max weight. The only way to do a heavy weight is with as much acceleration of the bar as you can achieve.

The movement starts by slightly bending the knees then exploding upward. The leg drive is the main force that drives the bar up immediately after it leaves the shoulders. Then as the bar rises, the arms take over and contribute more and more as the bar get closer and closer to lockout.

After the bar leaves the shoulders, the lift becomes almost identical to the press, and the arms are of course always pushing with all the upward force they can muster. But since the weights used in the push press are heavier than what the arms can move alone, all the arms can do is slow down the deceleration of the bar.

The goal is to provide enough force with the arms to keep the bar moving upward until it's locked out. With heavy push presses, the movement is fast and explosive right off the shoulders, but slows considerably as the bar nears lockout.

The reps per set are usually between 3 and 5. If you want or need to do more volume it makes more sense to do more sets and keep the reps the same.

My favorite push press workout is 3 submaximal sets of 5 early in the week (around 85% of 1 RM usually works) and one maximal set of 5 late in the week. One set of 5 in the push press can usually be done with around 90% of your single rep maximum.

Sounds weird, but it works. Here's how to do it.
Tips, Training
Christian Thibaudeau September 22 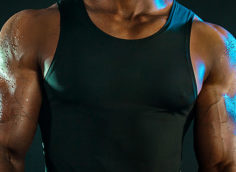