The Tale of Two Pauls

I've competed in both powerlifting and bodybuilding, and each endeavor taught me a lot about the other. One thing that Powerlifting Paul learned from Bodybuilding Paul was how important it is to train muscles and not just movements. That was a huge lesson.

Once I left powerlifting behind and dove back into bodybuilding, I really saw the vast differences in the two. Outside of the fact that you're using barbells in both, they couldn't be any more dissimilar.

With powerlifting you want to put the body in the most mechanically advantageous position as possible to move the greatest amount of weight. It's actually quite counterproductive, and I see a litany of competitive powerlifters show up on social media each week with new tears and strains.

When you're trying to focus on muscular development (bodybuilding), you actually want to put that muscle into the least advantageous position so that it has to work much harder during the movement, i.e locking down the joints in a way that reduces the involvement of other muscle groups.

Problem is, most powerlifters become very one-dimensional in their training thoughts. I fell into the same trap. I forgot that despite the fact that maximal strength is largely neural based, the muscles are still moving the weight. Newsflash, right?

I continued to suffer from adductor strains when my squat would begin to climb. Simply training the adductors on the "good girl machine" rectified that problem.

I had a similar problem later with my quads. Weight would go up, quads would sustain a strain. I knew my quads needed to get stronger, but I was already doing high-bar paused squats with over 600 pounds, and front squats with 455 for reps. Surely I had strong quads. Wrong!

Due to years of perfecting my squat for my leverages, I'd really learned how to load up the hips and rely on them to do the brunt of the work. This meant my hips were capable of squatting 635 pounds, but my quads were capable of, well, far less. Which is why anything in that range often resulted in me straining a quad.

I decided one day to rectify this and remove my superlative birth-giving hips from the equation. This meant hack squats, where the hips couldn't contribute as much, and my quads would be forced to bear the brunt of the load.

It wasn't much of a load. I struggled with three plates for a set of ten on hacks. That was a very humbling day. But it also let me know I was on the right track. I knew that if I got strong as hell on hacks, then my quads would be able to contribute to my squat and not be the weak link.

I followed up all of my squats with 1-2 sets of hack squats for 10-15 reps. I was living in the "anything over 5 reps is cardio" mantra at that time, so I can't explain in words how awful this was. After a few months of being diligent with this plan, both my hacks and my barbell squats ascended. I hit a gym-best 660 pound raw squat with good speed months later. My quads stayed attached to the bone, thankfully.

All powerlifters should be training for muscle growth and bringing up weak muscle groups for at least one twelve-week training cycle during the year.

I believe both powerlifters and bodybuilders can benefit from having training cycles where they focus on the other objective: 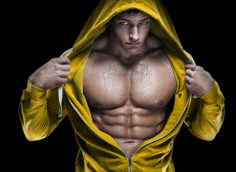 You did it as a kid. Here's why it needs to make a comeback.
Training
Gareth Sapstead July 12

Start with 10 presses and 20 front squats. On the next set, do as many presses as you can, then double that number for front squats. Continue until jacked.
Exercise Coaching, Overhead Press, Squat, Tips
Ben Bruno August 16