No one's really made any progress on their squat since 1986. It's true. I looked at some video, went through my notes, and made some calculations on a scratch pad, and unless I forgot to carry the 3, I'm right. No one's gotten better at squatting since 1986.

I'll prove it to you. Lifters add weight to the squat bar, right? After all, that's the whole point of weightlifting. But instead of doing a full squat with the new, heavier weight, their squat shortens up a bit. Week after week, month after month, they keep adding weight while unconsciously shortening the range of motion.

Eventually, their squat is so abbreviated that the movement they make could easily be mistaken for some guy standing in line for the new iPhone whose shorts are riding up on him and since he can't rightly put his hands in his pants and make some adjustments, he just sort of shifts his hips a bit. That's what most squats look like.

It's almost understandable because, unless you're the rare ass-to-grass (ATG) squatter, you've got no barometer with which to gauge your range of motion. You sort of guess how far to squat down and when it gets uncomfortable you think, "Nailed it!" and stand back up.

Not so with the bench press or the deadlift. With the bench, you touch the bar to your chest. With the deadlift, you hinge until your spine is roughly perpendicular to the ground and you can see your strained face in the mirror. The range of motion is clearly defined.

What's needed in the squat is a similar measuring stick or sticks, and sadly, they've been there all along, wondering why we don't use them.

Okay, so maybe some of you have made some progress since 1986, but you presumably get my point. It's human nature to take the easy way out, and unless you've got some way of knowing how far to squat, you'll end up cheating.

ATG squatters, of course, are the exception; the backs of their calves tell them they've done an honest rep. The rest of us, though, should use the damn safety pins or bars to give us something to "aim" for. While most people use the pins, if they use them at all, it's to prevent a really heavy weight from folding them in half and making them look like an open-faced tuna melt sandwich.

But the pins can and should be used to govern your squat depth. 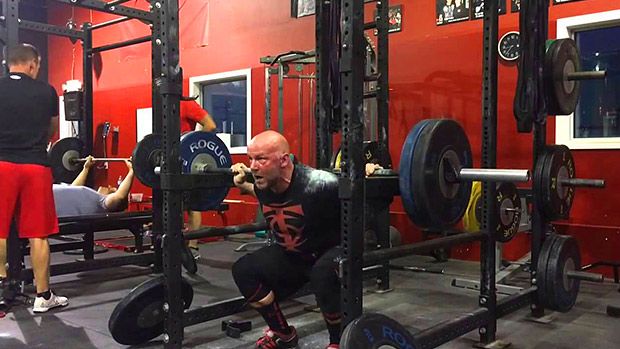 Put them (or the safety bars) at a height that's equal to where the Olympic bar is when you meet your pre-determined target squat-depth, whether it's parallel or below parallel. Then lightly touch the pins with the bar on each rep, the same way you'd touch the bar to your chest while benching.

Here's coach Derek Binford doing it with a short pause on the pins:

Both methods – the light touch and the pause – have their uses.

This seems like such a no brainer, but I've never seen anyone do this. Granted, the occasional lifter will set up the pins in this manner when doing Anderson squats, but that's about it.

Try it. You'll become an honest squatter, which is an incredibly rare thing these days. 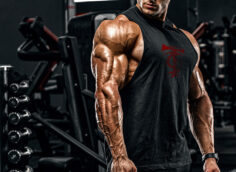 This might just be the easiest way to fix most ugly squat problems. And it only takes about 30 seconds. Check it out.
It Hurts Fix It, Tips, Training
Drew Murphy January 15
Make no mistake about it, hand to hand combat has been around for as long as Testosterone has poured through the bloodstream of Homo sapiens.
Training
Chad Waterbury April 13

Are people taking the ideas of correct exercise too far? This coach says so. Check it out.
It Hurts Fix It, Powerlifting & Strength, Squat, Training
Dean Somerset May 3