The vast majority of lifters blast through their workouts without even thinking about rest intervals. No doubt they want you to think they're serious about their workouts, that they're no-nonsense CrossFitty types of guys, or that they're busy people who've no time for lollygagging because they've got a one o'clock with the Willoughby Corp. fleece-lined underwear people.

Even serious lifters often give little thought to rest intervals. They know that rest and intensity are inversely related. As such, they probably pitched their rest tent in one of two camps, adopting either the classic but definitely stale bodybuilding method of medium reps and 45 seconds between sets, or the similarly classic strength-building method of low reps and 2 to 3 minutes between sets.

The investigators recruited 20 experienced lifters. All of them performed 3 sets of each of the following exercises 3 times a week for 8 weeks:

Each exercise was performed to failure using a 201 tempo (2 seconds to lower the bar, zero second pause, and 1 second to lift the weight). That's where the similarities ended, though.

Once a lifter was able to lift more than 20 reps or more than 8 reps, the researchers increased the weight by 10%.

So What Did They Find?

The researchers measured muscle thickness right after the initial bout of training and found that the high-rep, short-rest guys had an increase in muscle thickness that was almost twice that of the low-rep, long-rest guys.

The team synopsized the study in this way: 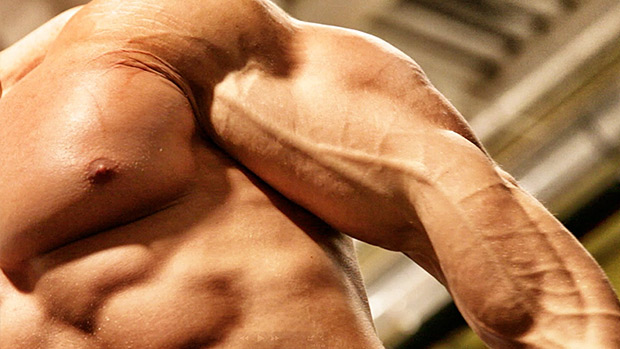 The findings of this study might tempt you to scrap your entire program and turn into a high repper, but it would be a mistake. For one thing, we don't know if it would work with other, larger body parts like chest, back, or legs.

Secondly, the high-rep, short rest thing might have just served as a novel training experience, thus spurring new growth the way any new training program or rep scheme might.

A logical response to this study would be to 1) try it with arms, but 2) more importantly, realize that adopting a periodization scheme where you juggle periods of low-rep, long-rest periods with high-rep, short-rest periods might be pretty damn fruitful in general.

Lastly, this study might convince you that sets of around 20 reps, while rarely seen because of "fear of being seen with puny weights syndrome," can occasionally work really well.

Add slabs of muscle to your upper back and improve your presses with these unconventional trap exercises.
Bodybuilding, Training, Traps
Joe Giandonato September 7