Warning: These exercises are specifically tailored for athletes and lifters who are pretty damn good at pull-ups. At the minimum, you should be able to do the following before attempting the variations below:

This one is great because it trains more of the speed-strength and power side of the force-velocity curve, which is generally deficient in the pull training category. Switch-ups accomplish this without directly exposing the shoulder complex to the extreme amounts of mechanical stress and overload common in the muscle-up.

By applying an external load in the form of chains around the posterior cervical spine, you subsequently fire the deep neck flexors and retractors that are almost always weak and underdeveloped for the majority of lifters. The chains create a feed-forward mechanism and activate the target muscles through a process called "reactive neuromuscular training," espoused by Gray Cook and Mike Boyle.

By driving your neck muscles into protraction and a more pronounced forward head alignment, you engage the opposing muscles and correct any faulty posture. This exercise is another valuable tool you can add to your corrective training arsenal to correct common postural defects throughout the kinetic chain as alignment "up top" partially feeds positioning down below.

Pillar chins require that you establish a strict vertical body orientation from head to toe so that every muscle in your body fires up. What's unique about this exercise is that the glutes and hamstrings have to really step up their game.

In Part I of this article, I carefully picked out seven of Charles Poliquin's principles and tried to make them a little easier to understand. Of course, as I mentioned, picking out only seven was a little like trying to pick my top seven favorite Hanson songs?okay, bad analogy.
Training
TC Luoma August 7 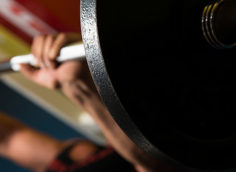 Save your shoulders while building your pecs. Here's how.
Training
Christian Thibaudeau November 16

People will try the weirdest diets and workouts, but many won't do the simple things proven to work. Here are three of them.
Bodybuilding, Diet Strategy, Tips, Training
Tony Gentilcore February 10