Low reps using heavy weights will build strength for sure, but can it build muscle? Of course it can. The secret? Perform multiple sets. Coach Chad Waterbury convinced most of us of this after we tried his programs using an 8 x 3 scheme.

Multiple sets of heavy-load training targets the Type IIB fibers that have the greatest potential for growth. Performing three sets of three reps won't do much for growth, but eight sets of three will be nitroglycerine to your muscles!

Get a pipe and make this yourself. Unlike a standard wrist roller, the rack version doesn't overtax your shoulders, just your grip and forearms.
Exercise Coaching, Powerlifting & Strength, Tips
Dan Blewett August 21 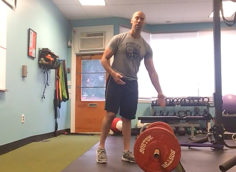