Ab wheel rollouts are a great exercise to train the anterior core, but they'll quickly become easy for stronger lifters. Unless you want to bang out sets of 30-plus reps, you'll need to make them harder.

You can do this a number of different ways, each with its own advantages and drawbacks. One way to go is to progress to standing rollouts starting from the feet rather than the knees, but this can easily lead to injury. Adding a weight vest works as well, but add too much and it changes your leverages in such a way that makes it difficult to maintain good form and increases the demands on the shoulders more than the core.

These offer a significant additional challenge over just using your bodyweight without changing your leverages or interfering with your ability to move freely. Plus, they offer accommodating resistance – they're easier at the point of full extension where you're weakest. They also take stress off the shoulders in their most vulnerable position.

Band-resisted rollouts are usually done facing the band straight-on so the resistance is primarily front-back. While that's fine, setting up at a 45-degree angle to the band but still performing them just as you normally would (moving straight back and forth) creates a unique challenge.

You're still ostensibly moving purely in the sagittal plane, yet you now have to resist getting pulled sideways by the band too, which forces you to stabilize in the frontal and transverse planes to resist rotation and lateral flexion, thereby working the rotary and lateral core along with the anterior core. I thus call them "anti" rollouts because they train anti-extension, anti-rotation, and anti-lateral flexion all at the same time. Here's what they look like in action:

These are a lot harder than they look. The band will have a tendency to pull you towards the anchor point, especially as you reach the point of full extension, so it's important that you're sure to move out and back in a straight line.

If you don't have a training partner to keep you honest, it's helpful to put something straight next to you to serve as a guide so you don't veer off course. You can easily increase or decrease the difficulty simply by setting up farther away or closer to the anchor point of the band. The farther back or the farther off to the side, the harder it is.

Ten years ago, most people who trained with weights had never heard of a "strength coach." Oh sure, there were sports coaches who worked with athletes on performance. And there were famous bodybuilders who theorized on hypertrophy methods in the magazines.
Training
Chris Shugart June 9 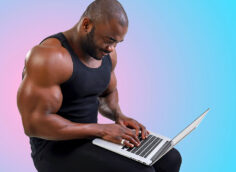 Looking for an online coach or trainer? Or is it time to fire the one you already have? Here's how to choose a good one and spot a bad one.
Opinion, Training
Gareth Sapstead December 1 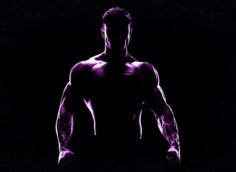 Superset these two exercises to build your back, chest, and arms. It's actually a pretty fun and challenging workout!
Back, Chest, Tips, Training
TJ Kuster March 31