Eh, probably not. Nine times out of ten, "tightness" is really the presentation of weakness elsewhere.

For proper health, we need to pursue structural balance. That means muscles on either side of a load-bearing joint must be strong enough to bear their own cross, so to speak, in order to contribute to a properly functioning, healthy joint.

Here are the exercises that give you the most bang for your buck.
Bodybuilding, Powerlifting & Strength, Training
Christian Thibaudeau October 4 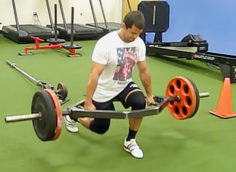