Here's a question I received recently:

"I've heard that you shouldn't vary the weight you're using on an exercise by more than 10 percent in a workout, otherwise it just confuses the nervous system and you won't gain as much strength. This has something to do with what's called 'rate coding.' Any truth to that?"

For weight training, no. It's based on a bad understanding of how the nervous system works.

For example, this 10 percent rule means that you couldn't do something like this because the load changes by 15 percent from the heaviest to the lightest:

Look at this objectively: What about warm-ups? If you can't have more than a 10 percent difference in weight on an exercise within a session it means you can't warm-up.

If your heaviest work set is going to be 600 pounds then it would mean that anything lighter than 540 pounds in that session would hurt your gains. Just for fun, try squatting 600 without a warm-up to see how it goes for you!

Yet, this "you can't vary the load on an exercise by more than 10 percent" is a pretty common belief, especially for those of us who had Coach Poliquin as a mentor. He put a lot of emphasis on that idea.

Where Did This Idea Come From?

It actually comes from track & field, coach Charlie Francis to be exact. This was Ben Johnson's coach, and he was light years ahead when it came to the nervous system and its role in sprinting.

He noticed that when his sprinters did resisted running (sprinting with a parachute) and the speed of the athlete decreases by more than 10 percent, the athlete's sprinting technique changed. For example, he'd run more upright and would have a slightly slower stride frequency.

Charlie's recommendation was that you shouldn't do resisted running with 10 percent or more resistance as it changes sprinting technique. Coach Poliquin took that 10 percent rule and applied it to weight training. 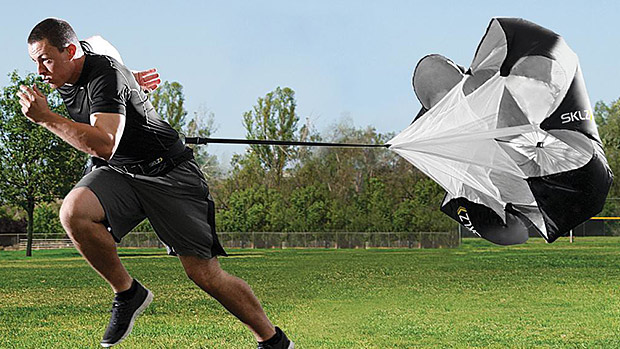 Weight training is not speed-dependant and the technique is much simpler. Even if your speed slows down when lifting, it doesn't affect your capacity to make the lift or get stronger or bigger from it. It also won't change your technique. In sprinting, both will happen.

The argument used to justify not varying the load by more than 10 percent in a workout is something called "rate coding."

Essentially, the proponents of this principle say that the body programs the speed at which the recruited muscle fibers will "twitch" as the set starts. That programming is called "rate coding." The heavier the weight is, the faster the fibers will twitch. If you change the weight from set to set too much you confuse the nervous system by changing the motor program on every set.

It's appealing and sounds scientific. However, it's not accurate and just shows a bad understanding of physiology.

See, when you're lifting heavy weights the firing rate of the muscle fibers will actually change during the set. In fact, once a weight starts feeling heavy (80 percent of what you can lift at that moment) every rep after that will have a different firing rate. The firing rate doesn't stay the same from rep to rep.

Here's where real physiology contradicts the 10 percent principle: The recruitment pattern changes with every rep because the "relative load" changes every rep.

If you start with 70 percent on the bar, the relative load is not 70 percent for the whole set. The weight on the bar doesn't change, but YOU get fatigued. As you get fatigued you also get weaker. If you get weaker and the bar weight stays the same, it means the bar will feel relatively heavier compared to what you can lift right now.

When you hit failure, it means that the relative weight is 100% or more of your capacity at that moment.

Now, let me show you what muscle fiber recruitment looks like depending on the weight. 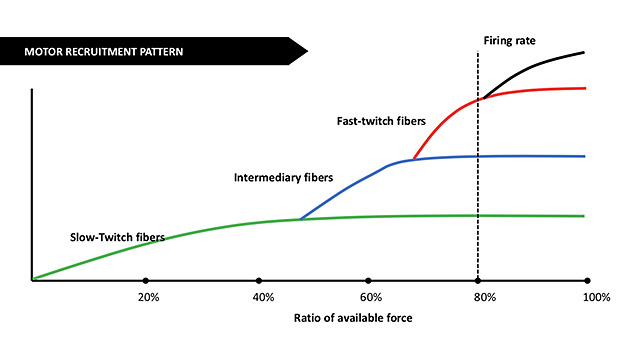 In our example above, from rep number 1 to rep number 4 or 5 you would compensate the fatigue by increase muscle fiber recruitment. From rep 5 and onward you can't bring in any new fibers, so from that point on you start making the recruited fast twitch fibers twitch faster (higher firing rate).

If the 10 percent principle were true, we'd be in trouble because even within a set there's more than a 10 percent variation.

What's important here is that every single rep uses a different recruitment pattern. And from rep 5 up to 10, the firing rate changes from rep to rep (meaning a different rate coding). With 70 percent it would mean that we could only do 4 reps (6-7 reps short of failure) because past 4 reps there's more than a 10 percent difference in relative load and the recruitment pattern is completely different.

If you've been lifting weights for more than a week you know that stopping 6 reps short of failure will give you exactly zero gains in either strength or size.

And if we're talking about low reps (sets of 1-5 reps using 85-100 percent), the same applies because every rep will use a faster firing rate, changing the rate coding every repetition.

Try to understand the physiology behind a concept before buying into it. Just because a popular coach (me included) espouses a concept doesn't make it true.

Basically, the 10 percent rule is absolutely incorrect when it comes to lifting and it IS acceptable to use a set/rep scheme than involves a bigger variation.

I personally love 7-5-3 waves, 1-6 contrast sets, and the 5-4-3-2-1 countdown method. All of these have a difference greater than 10 percent between the lightest and heaviest sets.

Ironically, Coach Poliquin was a big proponent of the 7-5-3 waves and 1-6 contrasts even though they didn't respect his own "rule."

Start your biceps work with hammer curls, then a preacher curl variation like the one here. For safety, finish with heavy barbell curls when you're biceps are fully pumped.
Arms, Bodybuilding, Exercise Coaching, Tips
John Meadows January 23

This is a less awkward and more natural variation of the pistol squat.
Exercise Coaching, Legs, Tips
Nick Tumminello September 12