There's no doubt that progressive overload has merit. Becoming proficient in the big lifts (squat, deadlift, bench press, and usually overhead press) with big weights has tremendous value across the board: bodybuilding, powerlifting, strongman, sports, etc. Everyone who enters the gym and intends to make it a fixture in their life should spend a significant amount of time focusing on the big basic lifts, and adding more reps or weight to the bar.

But the basics and progressive overload can be vastly overrated in terms of productiveness. And some people see it as the ONLY solution to training plateaus. Any training problem or plateau, according to them, can all be solved by adding more weight to the bar.

In fact, if you listen closely enough, any problem in life can be solved through progressive overload according to this camp. Just do more of what you were doing and a solution will present itself.

If you're a novice and haven't built the foundation, then it's probably your most viable training modality. The first three to five years, progressive overload has the greatest degree of payoff. You're nowhere near close to your overall strength potential and the amount of strength gained will usually be congruent with the amount of muscle that can be accumulated from fulfilling that potential.

The Point of Diminishing Returns

Like most things, however, there's a point of diminishing returns, especially if adding more muscle mass is your primary goal. And being so obsessed with nothing but adding weight on the basic lifts is an indication that your training toolbox is tiny and you're scared to broaden your horizons.

But if you look at the science and examine your own results, you'll know that just adding more weight to the barbell on three lifts isn't the final answer when it comes to pushing past growth plateaus, especially for those who've already gotten past the noob stage.

This is an area where men might benefit from learning from the ladies who've built impressive backsides. For them, developing a better mind-muscle connection was the thing that really got their trunk packed with junk. Not heavier squats and deadlifts.

And research has shown that training with different loading protocols produces similar results when volume is accounted for. So if you're looking to pack on size and are a "progressive overload, heavy weights on the basics!" dude, then you're short-changing your efforts in the gym and have become your own worst enemy through this faux-macho dogma.

Think about it: How many competitive bodybuilders only squat, deadlift and bench press for low reps? Yeah, none of them. If that's what worked best for muscle growth, then that's what they'd do.

Tim's "Ah-Ha" moments have to do with the superiority of supersets over combination exercises, working abs first, the proper way to gain weight, debunking the stability ball myth, and a nifty little trick to make sure you're squatting low enough.
Training
Tim Henriques June 4
The Bodybuilder's Hierarchy of Needs
Training
Chris Shugart March 22 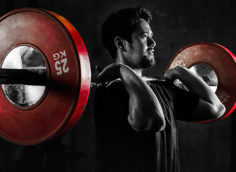 For real-world performance and athleticism, how much should men and women be able to do for one rep? Answer here.
Training
Charley Gould September 7