Can stretching help you build muscle faster? Yes, if you use a certain type of stretching. What type? Weighted stretching.

You've probably read about how loaded stretching increases activation of the anabolic mTor pathway, increases your active range of motion, and creates an occlusion effect that promotes increased blood flow and delivery of nutrients to muscle cells. So let's take a look at one more benefit.

Most of the benefits of weighted stretching focus on the target muscle. For example, performing a bottom-range dumbbell press hold at the end of a chest workout. But what if we were to stretch the pecs right before doing a set of, say, rear-delt rows?

What you get is increased active range of motion of your row, along with higher output and better quality muscle contractions. How does this work? It's based on the agonist-antagonist relationship: For a muscle to shorten to the desired range, its antagonist must be able to lengthen to accommodate.

Taking the example of the row, the pec minor has to lengthen to allow the rear delts to shorten. The rear delts are the agonist; the pecs are the antagonist.

When the agonist shortens and contracts, the antagonist lengthens and relaxes. This is a slight oversimplification, given that the antagonist doesn't always relax, at least not fully, but you get the idea.

The exercise combos below have been thoroughly tested and work very well:

6 Ways to Apply This Method

Putting These Stretches Into Action

These stretches are performed in one of two ways:

Use either method and allow 20-30 seconds between the weighted stretch and performing your working set.

You should be able to shorten the target muscle to a significantly greater degree than normal, thus increasing your ability to maximally contract the muscle. Increased stimulus equals increased gains! 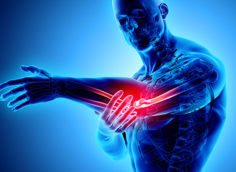 If you've tried all of the soft-tissue techniques to fix your tender elbows and nothing has helped, it's time to try joint mobilization.
It Hurts Fix It, Training
Merrick Lincoln, DPT April 1
It was a dire situation, a nightmare of indescribable proportions that only Dante could relate to. Every salacious thought I've ever had and every misdeed I ever committed was paid back to me in spades.
Training
Chad Waterbury July 19

Are you a balanced athlete? Take a look at these tests, try a few, and see how you stack up.
Challenge Training, Powerlifting & Strength, Training
Jim Wendler March 14