I tend to be judicious when it comes to overhead training. I'm not against it though. On the contrary, it's an integral part to building a strong, resilient body that performs well, not to mention the bevy of aesthetic benefits.

That said, most lifters have to earn the right to overhead press. The ability to move the arms overhead requires a lot to happen in concert between the humerus (upper arm bone) and scapulae (shoulder blades) – ample upward and downward rotation, i.e., scapulohumeral rhythm – in addition to possessing the requisite stiffness in the anterior core to serve as the "anchor" to access and control that range of motion.

In short, many lifters are better off using more shoulder-friendly overhead pressing variations, such as landmine presses, in the interim as they tend to keep people out of the "danger zone" – the last 30-50 degrees of shoulder flexion – yet still allow for a fair amount of deltoid activation.

One option I like, however, is the tall kneeling scrape the rack press:

The tall kneeling position takes numerous joints out of the equation and makes it harder to crank through the lumbar spine.

Pressing the barbell INTO the rack helps to recruit more anterior core, which in turn nudges a bit more posterior pelvic tilt, placing people in a better position (less rib flair) to press overhead. It also helps to recruit/engage more serratus anterior, an often under active muscle and a major player in scapular upward rotation.

These two points alone may make overhead pressing safer and more tolerable for many lifters.

Barbells and dumbbells reign supreme, but here are four other gadgets that deserve some attention.
Back, Bodybuilding, Chest, Training
Josh Bryant December 14 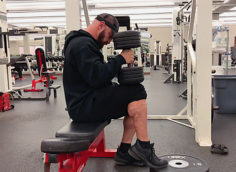 Arnold, Dorian Yates, Lee Haney, Sergio Oliva, and Larry Scott were among the greatest bodybuilders of all time. Here's what you can learn from them.
Bodybuilding, Training
Christian Thibaudeau September 26