Since doing push-ups to infinity can get monotonous, it's always nice to add a bit of variety. This is where this challenge comes in.

Don't use any weight for the shoulder press. The goal here is to complete as many reps as possible, and adding weight will fatigue you faster which makes it far less grueling than actually performing the press using just your arms as weight.

Why It's So Difficult

Any challenge that encourages you to do as many reps as possible of a certain exercise is obviously going to be difficult. The kicker with this exercise, however, is you get a short break between the push-ups and the arm raises which allows you to recover just enough to perform your next round.

This makes you question whether or not you can do another set – which adds a mental toughness component to an already incredibly difficult physical challenge.

This little trick really helps you tune up your mind-muscle connection. Here's how it works.
Bodybuilding, Powerlifting & Strength, Tips, Training
Dr John Rusin June 22
The old adage goes something like this: Two guys try to chop down a tree. One is using an axe, and the other is using a sledgehammer. Both are working hard, but only one is working smart.
Training
Chris Shugart October 15 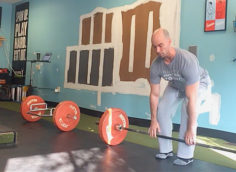 The glute-ham raise is one of the most popular posterior chain exercises in the lifting world. Here’s how to use it.
Glutes, Legs, Training
Ben Bruno July 15