Glenn "Power B" Buechlein is an elite-level lifter and one of few men to have benched a cool 700 in a shirt and 500 raw... without looking fat and sweaty.

Here's something he shared with me recently. It created a "why the heck didn't I think of that?" kind of moment.

It's a single-arm kettlebell row done standing with a bench in the wrong position. It's genius.

You simply stand with the bench in front of you and reach over it to row. Having the bench in the way and "setting the table" forces you to pull the kettlebell wide. It places more emphasis on your upper back and delts while smoking your core at the same time.

This looks like a cake walk at first, but give it a few reps and you'll soon start noticing the difference. You can also drive your elbow more upward rather than outward to change the emphasis a little.

In the previous version, you'll appreciate the idea behind having the bench where it is. It's simple, but it truly makes a difference to the overall feel of the exercise.

Not only does it change the angle at which you're forced to pull, but it adds an extra challenge to your core. The second version places more emphasis on driving your elbow up, rather than out.

If done correctly, you'll feel a lot more than just your upper body working. Your lower back, abs, and hamstrings should be kicking in as well.

Do 3-4 sets of 10 reps with each arm, pyramiding up in weight as you go. If you're not pumped and tired by the last set, then you weren't working hard enough.

Getting banged up in the gym doesn't have to cost you all your gains. Here's your plan for when something hurts but training isn’t completely off the table.
It Hurts Fix It, Powerlifting & Strength, Training
Mike Robertson March 1 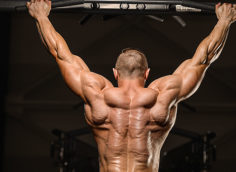 This simple rep scheme will turn you into a pull-up pro in just a month.
Training
Scott Hansen May 3