The dumbbell row isn't a good lat builder. Don't get me wrong. Rowing movements will hit the muscles of the upper back surrounding the scapulae, but you'll get more bang for your buck by using other rowing exercises instead of the one-arm row. This is because of the body's position relative to the dumbbell.

If you're going to do dumbbell rows, you can easily optimize the movement pattern to better hit the lats.

Use more of an arcing motion that "drags" the weight towards the hip and it'll hit the lats hard. It doesn't take a 160-pound dumbbell and a contortionist twist at the torso to make an exercise like this do its job.

A strong core takes more than just ab training. Give this exercise a shot.
Abs, Tips, Training
Drew Murphy May 5
I don't need to tell you how revered the bench press is. Along with exercises such as the squat and deadlift, it forms the basis of most strength training and bodybuilding programs. And it wouldn't be too bold a statement to say that the bench press is the most popular upper-body exercise in the world!
Training
Ian King September 7

Shoulders banged up? Take a tip from top powerlifters and use a pad to reduce the tricky part of the range of motion.
Bench Press, Chest, Exercise Coaching, Shoulders, Tips
Eirik Sandvik May 15 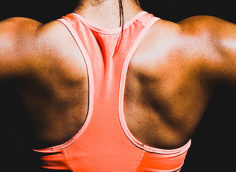