Many people overload the barbell hip thrust and glute bridge exercises to the point of diminishing returns, especially when chasing booty gains. While there's nothing inherently wrong with heavy glute isolation exercises, some people have no idea how to program these movements for growth while not tearing apart their lower backs in the process.

If you're hip thrusting with more weight than you use squatting, you're doing something wrong.

While the glutes should absolutely be trained directly under intensity and loading, make sure they're the muscles doing the work. Due to the non-axial anterior to posterior loading that the bar on the hip provides, there's a huge amount of executional error in thrust variations, some causing lower back flare-ups.

There are too many Instagram "models" hip thrusting damn near 1,000 pounds and athletes doing herky-jerky hip thrusts with eight plates per side. But is any of this beneficial?

People take it to the point of harm. Think about it. Is this dynamic movement, when uncontrolled and overloaded, actually originating from the glutes? Or is it just one hell of an impressive compensation that jacks up likes, shares, and your spinal health?

Do You Really Need More Than 300 Pounds?

EMG research done by Dr. Stu McGill found that for isolated hip extension movements, like the hip thrust, around 300 pounds is the optimal load for the average individual to peak contractile force in the glutes.

While 300 pounds is of course relative to the individual and the strength and stability in which they display, this number is a far cry from the type of bastardized glute work we see across the internet.

While you may be able to hip thrust over 300 pounds with pristine reps like the glute guy, Bret Contreras, chances are if you load them much heavier than that they'll get sloppy quick.

So if you've got 500 pounds sitting across your lap, where is that movement coming from? Most likely compensatory spinal flexion and extension coupled with a loss of stability and pelvic control. That means it's not going to make your glutes grow. If it's not controlled, it's not ideal for building muscle, getting strong, or staying healthy.

So, how should you train hip thrusts? Here's one way:

Use control, isometric flexes, and increased rep ranges of 8 and up. Get in the upper strength schemes; chase some higher rep hypertrophy and metabolic stress work. This will make your glutes the prime movers of the exercise, not the intervertebral discs.

The glutes are primary stabilizers of the hip and spine and are capable of protecting you for a lifetime of impressive physicality, so train them as such.

For best results, should you do slow reps or just more reps per set? Check out the new science here.
Bodybuilding, Tips, Training
Shawn Wayland February 26 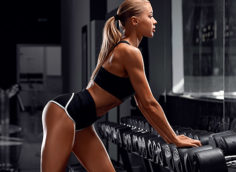 Add accommodating resistance to curls for new growth. Get a band and angle it so it provides maximum resistance at the top of the movement.
Exercise Coaching, Tips
Paul Carter March 21